Home People How we talk Don't fight anyone when they talk to you about “crazy bug”!

It is not to adjectivate anyone, the crazy bug (or rice bug) is an insect that is increasingly seen in summer in the San Jorge Gulf Basin. 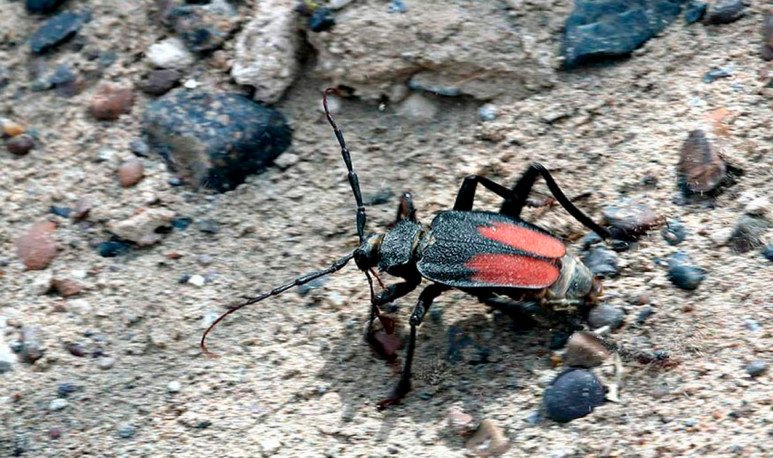 Animals   found only in  Patagonia   are many: aacute; n those who are mostly discovered in the plateaus of the various provinces and study experts in   paleontology  ,   whales   that visit the coasts mostly  chubutenses   , as well as  penguins ; the harriers or huemules in the  mountain range   . There are others - perhaps - not so highlighted by the press, not touristy exploited because they are little ones and, you have to be honest, nor as showy as those named above:  rice bugs or crazy bugs.

Its scientific name is Micropsalis Heterogama Durnford  and is a summer insect as it usually appears in courtyards and parts of the house with high temperatures: but not in any, but in areas of hills or beaches, so the inhabitants of Western Patagonian will not have this problem? It is that year by year the doubt usually appears about whether they are dangerous or not, whether a specific procedure should be performed with them, as if it happens when some scorpion or other types of insects appear.

The popularization of the names rice bugs and crazy bug is due to two different characteristics. While the first refers to the interior appearance of the insect, the second is by its gait, as it does it quickly. Neighbors of   Comodoro Rivadavia , Rada Tilly in  Chubut and also of  Caleta Olivia , in  Santa Cruz  , have observed an increase in them in the summer. But worry goes away when they realize (or consult) that they are harmless, even for animals. They do not reach more than 10 centimeters so when a person finds it and wants to take a photo to find out what it is, he must zoom in fairly close (or zoom) the cell phone.

These bugs inhabit underground in dry or arid areas understanding the geographical context where they live: wastelands, descampados, courtyards and gardens in distant neighborhoods, are also conducive for them to appear; in addition, they emerge from the surface only to reproduce since their habits are subterterra ; neos: the larvae on which they feed are at the roots of different sizes. In these cities they are mostly found because they are located, mainly, in hills, scrublands and sandlands, predominant landscape in the  San Jorge Gulf Basin , in addition to the characteristic wind.

This insect, mostly black but also red, deposits its eggs in a scrub area, mainly in specimens of zampa, a forage shrub scientifically called atriplex lampa.

Although they are harmless, year by year, especially in  January  and February, it should be remembered what they are and why they look so often . In a kind of everyday life of the beginning of the year, diaries and notes warn, in a tone of tranquility, of the presence of these insects, more and more in sight.  Summer , high temperatures and arid zones are the perfect combination for them to come out under the ground and see them at high speed, as if they were running a race.

The experts' advice to them is that they ignore them, in a sense of letting them reproduce and continue to lay their eggs; and being not so large in size - if compared to a finger, it is not even its entire length - failing with the length of the thumb -, be careful when walking, so as not to step on them.

Crazy bugs or rice bugs are neither a children's song nor a way to create art, nor is it a way to adjectivate anyone: they are a type of insects that, if you are from the localities of   Caleta Olivia ,  Comodoro Rivadavia   or Rada Tilly, you're sure to see them every summer.