Home People How we talk Did you ever see stone fall without raining?

Did you ever see stone fall without raining?

One of the expressions that best represent the reality of Mendoza. Know the meaning of the stone without raining and other expressions. 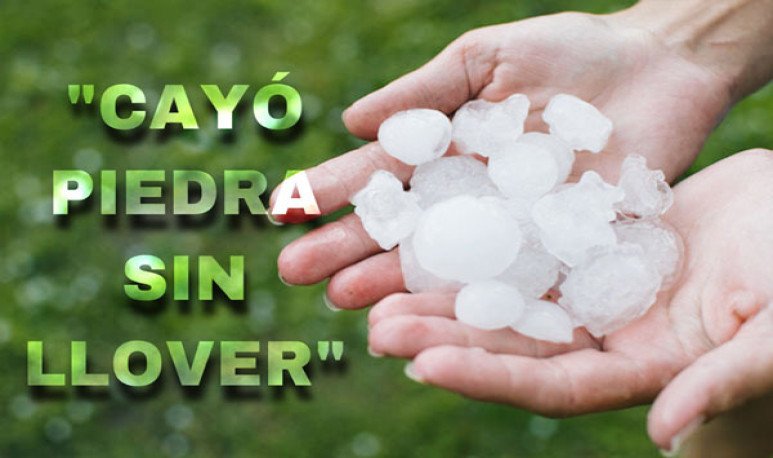 In a new installment,  we review some typical Mendoza expressions so that, when you visit us, you understand any kind of phrase that any local mentions . And, if when you arrive at a meeting someone says “stone fell without raining,” understand that your presence has not fallen well among those people.

In Mendoza, the word “stone” has two meanings. On the one hand, it is the hard mineral material that constitutes a rock. But, on the other, hail is also called “stone”. It is that, often,  when the phenomenon of hail-shaped precipitation occurs, frozen water balls that fall usually have the size of a stone.   This hail, or those stones, are really harmful. Not only because of the danger they pose to people or cars, but especially for producers who spend the whole year caring for their crops and, in a couple of seconds, can lose everything by suffering hail blows. But  the situation is worse when hail falls without being accompanied by rain . It is that, when it falls along with the  stones , the impact of the latter is less. On the other hand, when it falls dry, or “without raining”, the problem is greater.

For this long explanation, when a person who is not welcome comes to a meeting or meeting with friends, someone risks saying, “Uh, stone fell without raining.”

The one you grew up

This expression is used to describe that  an action is taking place without further care and unforeseen.   No planning or premeditation. An example could be: “If it rains, you have to lift the whole  camp  and shoot, like this, the one you grew up.” While the phrase is used in other parts of the country, here in Mendoza is the most common way to refer to the situation described.

Piss out of the jar

A little more physiological, this phrase reminds us, especially men, to  those moments when, affected by alcohol or sleep, we do not manage to urinate in a directional way.   Without going into any more descriptions, we need to know that not bushing the toilet is something totally unlocated. Therefore, “to pee out of the jar” is to do or say something that does not come to the case, which is not necessary, that is dislocated. Example:  if a policeman wants to give us a ticket because we are with the low lights off and we, instead of abiding by the order, invite him to fight, we're pissing out of the jar . It's totally dislocated. It would be something like “going to the grass”, the meaning of which is in this  note .

What bread with cheese

Instead of insulting and cursing before a circumstance in life where things have not turned out as we wanted or expected, we say: “What a bread with cheese! ”, instead of “what a parius! ” (with the part of the phrase above). A variable that we have in Mendoza to bread and cheese, and that phonetically looks a little more like “ what gave birth to it! ” that is, “What threw it away! ” or, directly, “threw it away”! ”.   It is very common to hear it among adults who comb the most gray hair.

In any of these situations, when you're angry with something that just happened, when someone arrives you don't get along with or if you hear someone say out of place, you already have a  battery  of phrases to shoot and look like a mendocino more.

The mystery of the Cat Flora