Luciana and Esteban lead 500 RPM, an NGO that trains communities on the use of wind energy. 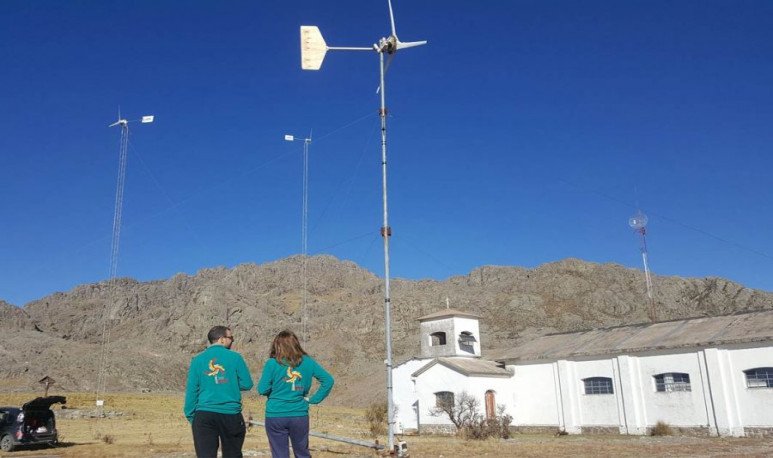 Luciana and Esteban travel the country carrying energy. Literally. They are the founders of 500 RPM, a non-profit association dedicated to carrying out social projects of training, manufacturing and installation of low-power wind turbines.

Luciana Proietti and Esteban Van Dam are joined by love and something else. They met in Nicaragua, in the middle of the jungle, where they both trained with Blue Energy Group, an association that worked with wind energy. There they learned about sustainableenergy, fell in love and shaped their project. Then they returned to Argentina to create their own foundation.

The goal was clear: they knew that in our country had more than 3000 rural schools outside the network electric. Since 2012, they toured the country to spread the Piggott mills, they learned to build in Nicaragua. They teach educational institutions, to individuals and rural organizations to generate and replicate their own energy.

It is an open patent, easy to operate wind tower, which was created in 1960 by Scottish Hugh Piggott. Currently, together with more than 40 NGOs around the world, they are members of the international organization Wind Empowerment.

500 RPM already has more than 2000 people trained in the manufacture, installation, operation and maintenance of themills . Once the members of the association reach the rural community, they train the beneficiaries in the assembly of the mill. After the settlement of the tower, the community is called to an event so that everyone knows and learns to sip this new form of energy that benefits everyone. After their departure, they continue to follow up on the case.

This year, the organization was one of the four winners of the Banco Galicia Award in partnership with Fundación Williams, in the tenth edition of the Fund for Environmental Conservation. His project for the training and manufacture of Piggot wind turbines in the Epulef Village of Chubut received a prize of 250,000 pesos.

And they go for a lot more.