Home People As we are With gates open

The Parque General San Martín is entered through the traditional “gates of the park”. We tell you their story and what they mean to Mendoza. 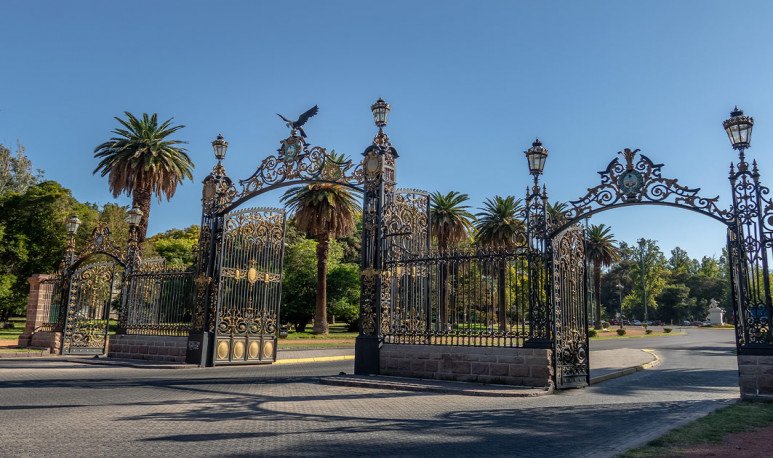 San Martín General Park, better known as “the park” for the Mendoza people, is the green space par excellence of our province. Fountains, roundabouts, meadows, the lake, the world championship stadium, the indoor stadium, the ecopark, the hill of glory and many other attractions are part of this green lung.Due to its size, we can enter through different places . However, the formal entrance to the park are “the gates of the park”.

The history of the Gates of the Park is very special and ends up being anecdotal. It was the desire to give appropriate access to the size of the park, following the custom of European gardens and parks, which led the provincial government to incorporate these monumental gates. They were acquired during the government of Emilio Civit from the Walter Macfarlaine & Co. smelter in Glasgow, Scotland. They had been commissioned in the early years of the 20th century by the Red Sultan of Turkey to this Scottish foundry, but, after its overthrow, the majestic gates were left without owner and were bought, in 1907, by the Government of Mendoza to frame the access to San Martín Park.

By 1909, the gates were located in relation to the symmetrical axis of the current Emilio Civit Avenue, hierarchizing their main access. The set consists of three iron gates, two sheets each, joined by gates. The main access opening is 6.30 m wide by 6.70 m high and the lateral opening is 3.90 m wide by 4.71 m high. The gates are mounted on a stone base (granite) 0.85 m high. At its highest point it reaches 9.40 m. The main portal crowns the representation of a condor with its wings unfolded and the Mendoza Shield. They replaced the symbols of their original commission, the imperial crown of Sultan Abdul Hamid II and a crescent, a sign of Islam.

Originally they were painted in black and gold, as witnessed by the French traveler Jules Huret, who visited the province in 1910. This coloristic tradition is clearly British, which is consistent with its origin. But for a long time they were painted green. The Arq. Jorge Ponte chose, in his recent restoration, to return to the original colors.

In 1909, the year of its installation, two pedestrian gates and balustrades were added that surrounded the park. In the 1950s, reforms were carried out by the Arq. Daniel Ramos Correas. His idea is to give continuity to the park with the urbannucleus, to this end he suppresses the balustrade and the side gates (because they do not belong to the original set).

We Mendoza use the gates of the park as a reference point. To give any indication regarding the San Martín General Park, we take the gates as a reference that everyone knows. It is also a meeting point to start a running circuit or to spend an afternoon of mattes in the green spaces that surround them .