Home People As we are Why go to Miami if we have Cramer and Congress?

For a few years, a Buenos Aires neighbor has been in the habit of sitting to sunbathe in Cramer and Congress. 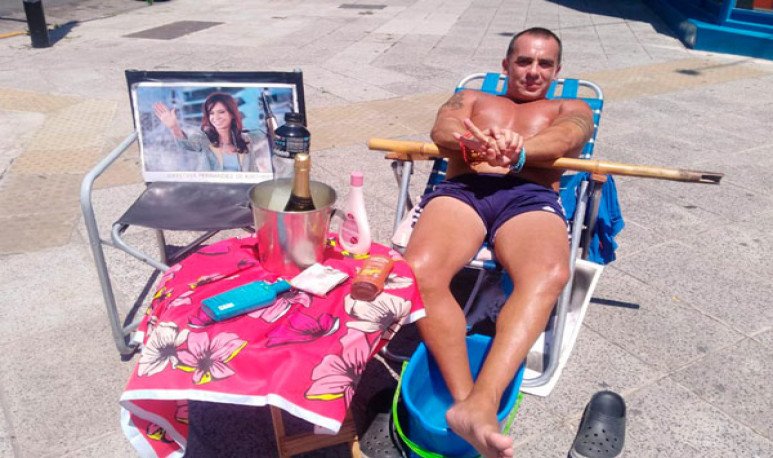 There are some things that only happen in Argentina. Some will say it's because  we're the best country in the world . The truth is that, if there is something that will never be missing here, it is creativity, ingenuity and — why not — a little bit of madness. We can run into the most unusual situations on any given day in any corner. Take for example the corner where  Cramer and Congreso avenues cross, right on the border of the Buenos Aires neighborhoods of  Belgrano and Núñez . There, for years, when the heat starts,  a neighbor has been summer in the middle of the sidewalk.

As it reads:  a gentleman takes  a  chair, a coffee table and everything you need to spend a day in the sun  . Protector, post-solar gel and, of course, snacks - champagne, bread and cold cuts. To finish the scene, he also carries a well-peronistic poster, with the photos of Juan Domingo and  Eva . “ This is the Peronist  Miami   , we are better than in Miami here. In Miami you get filled with sand, the plane falls, you get charged in dollars...”, he explains about his peculiar custom, which  is already a classic for neighbors in the neighborhood.

From the sidewalk to the TV

All this, which for those who attend Cramer and Congress is a common thing, became relevant recently, after the peculiar way of spending their hours in the sun was part of the   Cameras en Acción programme, which is broadcast on Telefe.eacute;

“ You have to have eggs to come and sunbathe here, Daddy ,” says the protagonist of the note. There, Mr. — with an admirable tan for the time of year — shows what his routine is like and asserts, proudly, that he is better there than anywhere else. His neighbors define them as “the star of the neighborhood”, and he moves like a fish in the water, wearing only a swimsuit, as if he were in the middle of Mar del Plata in January. Between honks and some scream, he approaches to offering little crude and cheese to motorcyclists and collectives, because they will be able to say many things about him, but not that he is angurrient. “ People like it, clap it, honk it. It's good, it's like that ,” he says.

The day also includes a quick shower, with clean hose, in the front garden of a house whose owners do not know. “ Here we have to bathe, too ,” he says. And he claims that the owner of the apartment can not tell him anything because, too, he watered the plants.

It's wrong who wants

“Do you know what one said to me?  He wants it wrong ,” he says. And that seems to be his motto of life. Will he be a little crazy? Maybe. But it is also true that  people who know how to take advantage of the little things in life are definitely happier than the rest . The one who doesn't need to get on a plane to take a vacation. The one who walks on legs through the middle  of the City of Buenos Aires  and nails a champagne in Cramer and Congress. So who's crazier? Is it true that the one who wants is wrong?

Let's learn from these little  Argentine follies  that adorn our sidewalks every day.