Home People As we are Why are seven grenadiers guarding the remains of San Martín?

Learn about the history of one of the most prestigious bodies in our country. 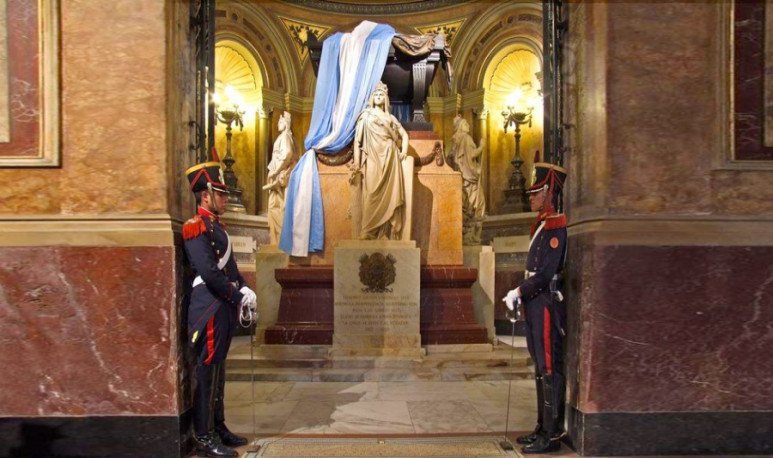 The following is a story that has some myth (all the big stories have some myth) and something of certain. But as is often the case with fiction, it is more interesting if we give it a complete value of truth. So let's tell it as if it's indisputable. Let's see.

General  San Martín  died, as we all know, on August 17, 1850.  30 years later, in May 1880, his remains arrived in the city of Buenos Aires , where they would remain until the present day. He was heed to a clause that  San Martín  himself had included in his will:  “I wish my heart would be deposited in Buenos Aires.”

In 1826, when the Latin American liberation campaign was already ending, the surviving grenadiers,  without money to solve their return to Buenos Aires , met a patriot who put the money out of his pocket. 23 carts and 78 grenadiers were launched once again.

Arrived in Buenos Aires, they found that most of the Buenos Aires (as would happen again and again throughout history, the case of former Malvinas combatants is a good example),  completely ignored them.  They formed in Plaza de Mayo, then marched to what is today Plaza San Martín (there were the original barracks of the regiment) and were waiting for orders. A few months later, Rivadavia,  the new president, recruited them into presidential custody.  A little later they were made available for the Brazilian war and, upon the end of the conflict (in 1828),  unity was dissolved.

More than 50 years later, on Friday 28 May 1880, when the remains of San Martín returned to hit Argentine soil,  it was a crowd that had gathered to give him the honors:  students, journalists, members of the Rural Society, and many personalities who did not want to miss the occasion (such as the former presidents Sarmiento y Mitre and the current president Avellaneda). Suddenly, from the bottom,  seven riders were advancing to pass.  They wore worn uniforms, faded. In many places, even, patchwork. The crowd didn't recognize them. Until they were closer and there was no doubt:  they were grenadiers.

No one had summoned them, they had not been taken into account. But they, knowing that their boss was returning to the homeland,  escorted the coffin from the port to the Metropolitan Cathedral.  They were on guard all night. The next morning,  they disappeared with the same humility and hidalguia with which they had appeared.

It was Roca who, in his second presidency, reassembled the regiment and asked his hierarchs to choose every day the  best seven men to guard the tomb of San Martin, one of the few Argentine heroes that is beyond any crack: no one discusses it like the Father of the Fatherland (and the continent).

As a closure, I leave you a video of the grenadiers' change of guard. I don't know why, but every time I see it gets me excited. Maybe because it makes me think of moments in history when  “Let's be free, that else doesn't matter anything”  was not a phrase made but a real incentive for life.