Home People As we are These are the sanmartinian parents.

Las Heras boasts of being the place where the Cruce de Los Andes was born. That is why he is in charge of doing all the Sanmartinian recognitions. 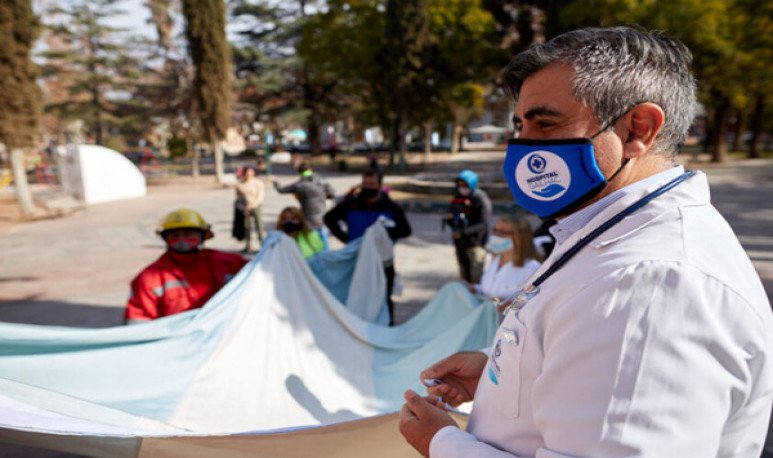 In Mendoza, it is promoted  by law that Father's Day be celebrated on August 24 . It's just that day,  José de San Martín  became the father of Merceditas. The department of Las Heras, in particular, because it is the birthplace of the sanmartinian gesture, with the historic El Plumerillo field and some of the steps used by the  Army of Los Andes , is the person in charge of making any distinction relating to the Liberator. In this case, the authorities decided  to recognize the “Sanmartinian parents”. An initiative that seeks to give value to the work of all those doctors who are parents and who struggle day by day against coronavirus.

In many cities in our country  the work of doctors has been recognized  with applause at 21, something that is totally exciting for those who continue to practice it. The fact has been documented in photos and videos that have flooded media and social media.  However, in Las Heras, something different was chosen.

This distinction is given to parents every year, using different motifs or triggers. On this occasion, COVID-19 is the common denominator. For this reason,  health workers were distinguished who while fighting the disease, they care for their children with the same vocation of service as their patients.

That is why the Municipality of Las Heras chose health workers who are parents to distinguish them as  Featured Fathers Sanmartinianos , a recognition that for several years the municipality has carried out within the framework of the celebration  of August 24 as the real day of the Father, in the province and in the rest of the country.

In total, 37 doctors received the distinction consisting of a diploma signed by the mayor and a notebook in agenda format with pen as present.  Due to the current health situation, this year there was no face-to-face event to honor them, each one was given recognition to their workplaces (hospitals or health centers).

Father Sanmartiniano's Day has been imposing for many years in the province. In fact, there is a law that abates it.  The Lasherins have incorporated it quickly, thanks to the identity of a people of patriotic pride that saw the Liberating Gesta de America grow in their lands and with its people from its cradle, the Historic Field El Plumerillo, so that General Don José de San Martín and his Army of the Andes achieve the greatest feat of freedom  of all time in our history.

He, Father of the Fatherland,  received on August 24, 1816 the arrival of Merceditas (baptized Mercedes Tomasa San Martín y Escalada), his first and only daughter, the result of his marriage to Remedios de Escalada. To it he dedicated   12 maxims  that Argentines take as their own, and from Mendoza we try to honor them every day through the effort, solidarity, respect and love of Mendoza to its province.

The noble and essential work of these 37 doctors who provide their services in charge of COVID operations in health centers and hospitals in Las Heras, are a true reflection of that Sanmartinian spirit that characterizes Lasherins and Mendoza. Because these men care for and contain those infected with the same love as their own children.