Home People As we are The monument to the tutuca

A strange amorphous monument is erected in a green space in Guaymallén. The area is very busy, and we all ask ourselves: what is that thing? 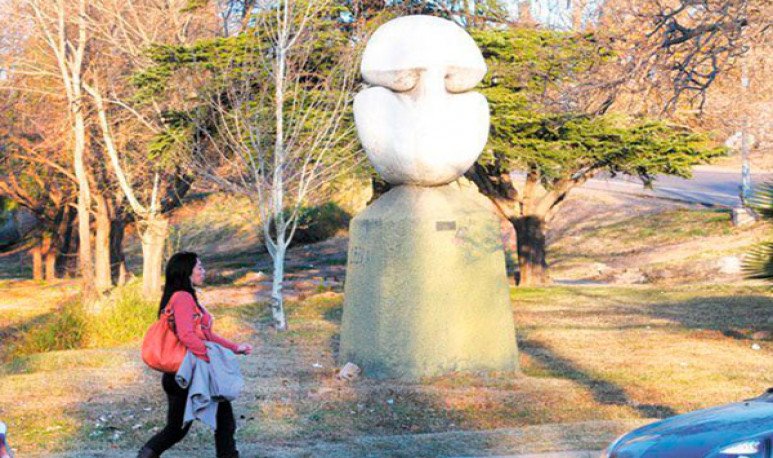 By definition, a monument  pays homage  to someone, something, an event or anything you want to pay tribute to. But the idea is that, minimally, anyone who sees it knows what he is paying tribute to. This last part is not met with this strange figure of cement that is located at a nerve point in one of the most important departments of Mendoza.

The subject is commented on by neighbors, usually.  “ For me it's a tutuca,” some say. “No, it's an elbow,” say the most imaginative. While some witty says that it is a monument to the   gnocchi , although we do not know whether to refer to the pasta or those who pass to collect the salary at the end of the month. After so many wrong choices, here goes the truth.

The truth is that behind this urban sculpture lies the manifestation of a  “mystical search” with which the author was able to captivate an important jury during the First National Biennial Sculpture Competition, organized in 1980 by the Municipality of   Guaymallen . “North Mysterious del Ser” is the name of the work executed by renowned artist Elio Ortiz.

This abstract piece, according to Ortiz explained, allows us to reconfigure  a face with closed eyes and that image that projects a view from the front, with its shapes and shadows, was inspired from the life of great historical personalities or religious beings who passed through the world , “like Jesus himself of Nazareth of Catholic believers,” said the artist.

The monument weighs more than  600 kilograms, measures 3.50 meters and is made of iron, cement and marble.  In order to participate in the contest, Ortiz hired a crane to move it to the municipality.  The prize money had to use it to pay for that extraordinary freight , which served to popularize his work was already cut off the traffic, which made everyone talk about the contest.

Given the explanations of its author and the specialists, we can conclude that,  being abstract, everyone can give that monument the meaning it seems to him . And the truth is that, in that sense, tutuca is the one that most resembles those forms.

The author  spent more than 20 consecutive days working almost 20 hours per day  to get to present the work at the contest.

The sculpture is located in Arenales streets and Lateral Norte del  Acceso Este .  These are two very important arteries for the transfer of residents of the most populated department of Mendoza.  Therefore, any inhabitant of Guaymallén (and almost all Mendoza) have ever seen it and have made some comment on it.

To this point, it has spread its existence which is reference to indicate any type of direction or position. That's why, on your next trip to Mendoza, stop by the amorphous monument and give it any sense to you.

What does the Paseo Colón e Independencia monument mean?