Home People As we are The green tide we forge

Legal abortion is already a fact in the Argentine Republic. And green abandoned its color status to become something bigger. 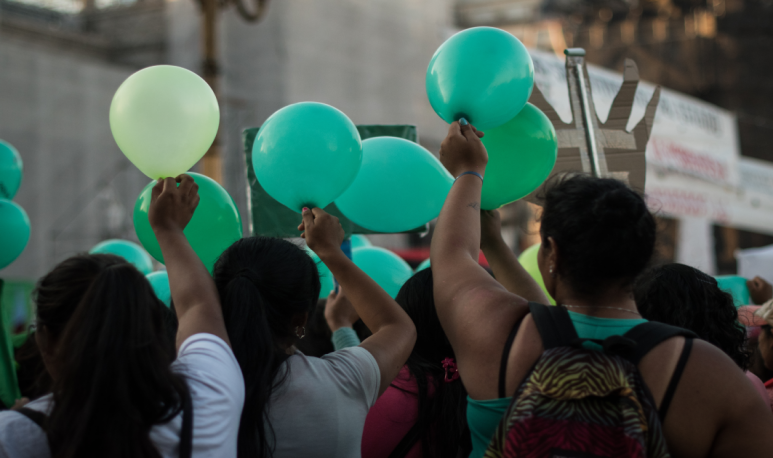 The few moments when being a woman is not scary are when we're in a pack . We know that we can dress as we want, with little or a lot of clothes, and that we're still sheltered. None is thinking about whether they're going to touch our ass, and we don't have to worry about crossing the street. It's hard to explain why it's complex to grow in a world the way we do it.  But no one should be confused, that all awakening hurts and realizing what we naturalize becomes overwhelming at times . Practices, customs, guilt, desire or lack of them. The last few years involved  unlearning    to start building new green foundations  .

As a warning, I must say that these words are going to try to form an essay.  It will be a subjective story, crossed by a reality and look person l. Although we cannot be foolish and pretend to deny that the end of the year's media agenda can only talk about one thing.  The feminisms of Argentina, because they are diverse and complex, set a precedent on December 30, 2020 . With their shortcomings and successes, they taught about perseverance, patience, and of course, struggle. When we felt we were close to achieving it, the pandemic postponed our plans. However, we knew that there was no more time:  the gobas continued to die underground .

Until they saw us

From the  first debate  on  abortion  in 2018  to its conversion into law  , only  two years  passed in the chronology. In the middle we weave  a myriad of signifiers  that the science of signs will surely take care of studying in the future. One of them is  green . How much can there be behind an element of the chromatic scale? Well, everything for starters.  When we see that hue or hear that name, we don't think about simplicity anymore . Nor in Diego Torres's song that tells us about hope.  On the contrary, it represents handkerchiefs,  women , resistance, brotherhood, organization and search for expansion of   rights .

So you will  never  return to a state of simple color again.  At least not for Argentine women, not even for the rest of Latin America . Green actually  turned into a tide  with all that entails. It acquired shape, texture, massiveness and even sounds. In fact, I watched a video on Twitter captured in the immediate vicinity of Congress that finished showing it to me. It was at the time that the Senate voted and the results yielded 38 in favour, 29 against and one abstention. The initial silence of the mystery was transformed in a matter of seconds into thousands and thousands of screams that fused seemed to be one. It reminded me of the calm of the sea before the waves swept.

Legal, safe and free abortion  is a cause that  precedes us  . What we did was take the contributions that our ancestors left us, defend them and continue them. I believe that every Argentine  feminist  will have his own motives and motives to fight. I know I have them. Differences, stories of lives and experiences converge in that scenario. As real sisters, we fought, debated, and also reconciled.  Today we know that we achieve more things together than separate . Our horizon is full of causes and new rights to conquer. Along the way we'll be adding those who want to do it, but  never forcing . Meanwhile, the singer Femigangsta said:  “In every corner in the city you will find green scarves.”