Home People As we are The Gorosito does not miss a

El Gorosito, the historic monument of Caleta Olivia, did not want to miss the Christmas celebrations. 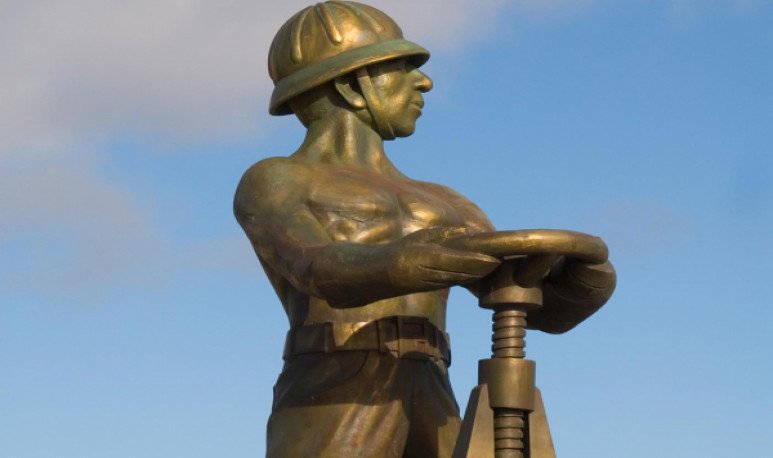 El Gorosito , the monument to the oil worker located in the town of  Caleta Olivia , province of  Santa Cru   z , you don't miss one: you continue to take care of COVID-19, but also now she wears a  Christmas hat according to the holidays at the end of the year. Before, the residents of the Bicentenario neighborhood of that  Patagonian city, had raised a giant Christmas tree next to a replica of the Caletense icon and now joined us.oacute; a new holiday.

Already in the first days of March, when we began to transit the quarantine through the advance of the coronavirus in the country, the historic caletense place called on neighbors to become aware and the necessary measures to prevent the spread of the disease with a  white fallow .

After the months, with the imminent arrival of Christmas, the local Public Services staff approached El Gorosito and put on a Christmas hat and did not leave outside the monument of the New Year's celebrations.

In addition, taking advantage of this, there was also a replacement of barbijo, given that the Patagonian climate had deteriorated what was placed in March, and the placement of a celestial cover was arranged, in addition to making a simple tribute to the work done by health personnel, which carries nine months at the foot of the canyon looking after the neighbors.

But the act of wearing the hat in El Gorosito did not end the activity, since  Caleta Olivia 's teacher, Sara Godoy, contributed to the Christmas spirit of the northern town  santacruceño  , given that he organized a small but emotional event with carols involving children and families, which were also taken pictures with  Dad; Noel  for the feast to be complete.

It all started with a drawing

The Christmas hat for El Gorosito was not born out of nowhere: it all started with the drawing of Maite, a little girl who imagined the monument to the oil worker with that ornament and captured it on a paper.

The girl showed Sara Godoy, and also Rosa Agüero, who have a children's radio program born in August-, the drawing of El Gorosito with the hat, and there came the idea. Rosa Elena Pintos took the challenge of making the accessory, and after about fifteen days, she was ready.

It was literally a challenge, because the diameter of the hull of the monument could not be removed in person, but was done by means of a photo and a PC program. After fifteen days, the garment was finished.

Maite, the author of the drawing and who kicked the initiative, could not hide her happiness to see her dream realized, with the addition of the presence of Santa Claus.

Atilio and Andrea, the girl's parents, also showed their excitement to see their daughter's dream, which could have been that of any baby, and thanked Sara and Rosa for doing their best to make it happen. “In difficult times we want to lift the Christmas spirit, there are many families hit by this pandemic and we want them to know that we have to keep taking care of us,” they said.

Rosa Godoy, the teacher who organized the event next to El Gorosito, said that in this way the children could arrive, who have been facing quarantine from their homes for nine months.

Maite's dream, which he captured in his drawing, overcame the adversities of this particular 2020 and contributed to the  Christmas spirit of Caleta Olivia , adorning one of the most important things.cones of that Patagonian city and bringing joy to the youngest, who between carols and photos with Santa Claus could enjoy a full color afternoon.