The Cutralquenses “villages” are a badge of this urban conglomerate. In this first part, we contextualize you in Argentina prior to the villages of Cutral Có and Plaza Huincul. 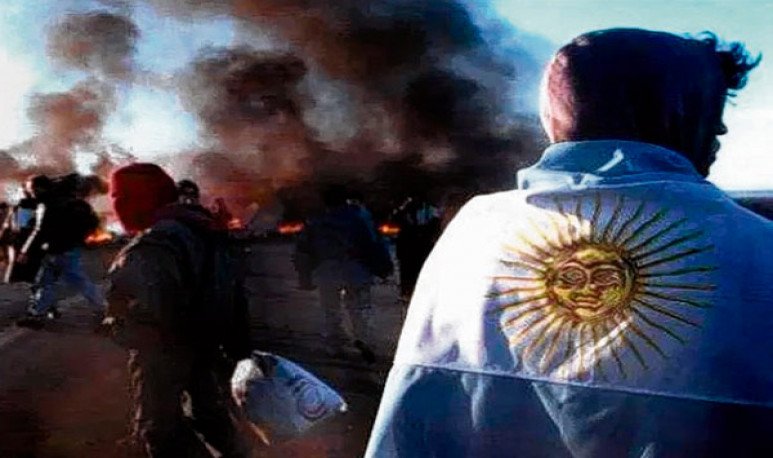 The  protests of a  heterogeneous and large fraction of the population of Cutral Có and Plaza Huincul were,  throughout history, a constant.  The famous  Cutralquense “villages” became an insignia of the urban conglomerate within the province of  Neuquén . This is the case that graffiti is still the proud badge “  Cutral Có  2 - Gendarmerie 0 ” on different wallings in the localities.

The most recent villages were those of the 1990s; in them, the entire society rebelled against the overwhelming Menemist policies. This February, it marks 6 3 years of the first time Cutral Có and  Plaza Huíncul  joined to demand  decent working conditions and began to forge a history of struggle and protest against the Governments of any kind.

In this first part, we tell you  what Argentina was like before the first village  and what were the factors that unleashed in Cutral and Plaza the first social outbursts on a large scale.

Context prior to the village

Militarism and oil industry were always intertwined. World War I set the precedent for the relentless and growing  demands for fuel and  petroleum products to be remedied under the tutelage of military personnel.   In every oil field and in every town on the planet that is going to this industry,  military power controlled the lives of the workers and their families.

In our country, the oil worker was seen as a civilian soldier. In addition to preserving ownership of the house, the company controlled  other aspects of the private world:  food, family relations, leisure and the same sex life of the operators. This ensured him an  inflexible discipline and absolute rigidity in the performance of duties and obligations . In return, the worker received a  number of benefits,  including health and education services, subsidized supply and sports facilities.

The first time oil workers came into conflict with the provincial and national governments, was in  1949 . The strong vigilance exercised by the official oil company, reflected in  spying practices and the prohibition of the workers' press, did not prevent the landing in the region of the State Workers' Association (  later called the YPF Workers' and Employee Union ). Their demands, in the beginning, were not related to wage claims.  Improving working conditions , on the other hand, was at the center of workers' demands. Unpaid overtime, lack of work clothes, absence of a motor-licensing regime led to the first trade union claims that had the 1949 strike as a pilot experience. On that occasion, nearly  two thousand workers stopped oil production  for two weeks until, after Eva Perón's intervention, the workers achieved a favourable response to their demands.

It is known the strength that  Perón's first government made to align trade unions with their national policies.   It is also known the fate of those opposition guilds. The reality in Cutral Có and Plaza Huincul did not differ from that of the rest of the country. The Unified Union of State Oil Tankers ( SUPE ) was born in the region, which was quite close to the national government and cohabited for a short period, in a sort of double trade union power  , with the YPF Workers' and Employee Union. Such was the persecution that the latter suffered, that  the guild ended up disintegrating.

Cooperativism, coffee talk, libraries and full clubs were a constant in the Cutral - Plaza conglomerate (as mentioned locally).  YPF was the cornerstone of sociability , children and adults. However, in addition to the famous “ patriotism of enterprise ” that workers and their families could arouse, this context of neighborhood union was also an optimal cultural framework when it comes to warming up the spirits for social protest

When the Libertator Revolution presided by  Aramburu took power and outlawed Peronism , the situation of oil workers and trade unions (and Argentina in general) worsened markedly:  unemployment and prices began an escalation that did not appear to be in the world. was to have an end. Moreover, the  intense trade union mobilization was part of a “Peronist resistance”  that abandoned its inorganic character and began to dispute power. Different sectors were willing to boycott the electoral process of 1958. The idea was  to pressure the Aramburu government  right at the time it was trying to show the viability of an Argentina without Perón. In the face of this wave of protests, the national authorities issued a decree  banning any strike in the 40 days prior to the elections on 23 February .

The context was given for  the pressure cooker that was our country in 1958 to explode.    Cutral Có and Plaza Huincul, seemed to be the right place  for the wick to light up.