Home People As we are The cornerstone of Las Heras

In Las Heras, the neighbors found a stone that would keep many years of history. They intend to build a space or a square from it. 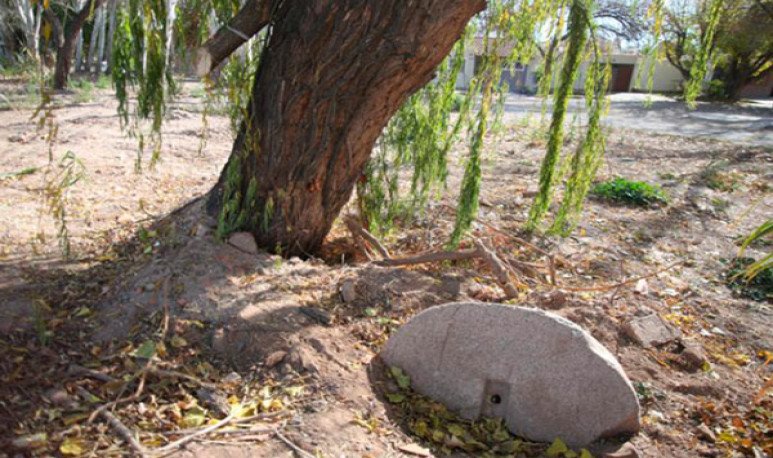 Stones exist since the planet exists. Since we're kids, we get our attention and we play with the stones on the sidewalk or the courtyard of our house. There is some nostalgia and some memory always associated with stones. However, the obsession with keeping a stone found in  Las Heras  intact is a case of analysis.

The neighbors found, in Las Heras, a stone that would be from a 19th century mill. There is talk of the Cornerstone, which referred, in ancient times, to the first stone that was placed in the construction of a building, as it served as a reference for the rest, and there then converged two walls. In Las Heras they found a large carved stone, in the Ujemvi neighborhood, and it is a millstone of the century   XIX . This stone may be the “cornerstone” for a new park or promenade, as the neighbors of the place do not want it to leave and already consider it their own heritage.

When they did the weed cleaning, and pulled a canaveral from a space outside the Cacique Guaymallén canal, very close to the zanjón of Los Ciruelos, they found this striking, semi-buried form, and realized that it was an antigu piece , perhaps even historical, and immediately called the authorities. The first to hear were the tourism officials of the Municipality of Las Heras.

Due to the pandemic, an archaeologist who came to Mendoza, who works in Europe, dedicated to egyptology, approached the place to see what it was. He explained that the  mills used stones like the one found, which were made of granite, very hard, and were used to grind the grain and obtain flour, and alternate their use by grinding minerals that came from the mines of   Paramillo . In addition, the  director of Cultural Heritage of the Province, Horacio Chiavazza , who is also an archaeologist,  came to the hypothesis that it is a millstone that is part of a structure close to Mendoza's Founding Area, on Pedro Molina Street . In fact, there is a nursery called “Pepe Molino”, which pays homage to the mills that were in the area.

When flour production declined in Mendoza and the wine industry was enhanced, those places (mills) fell into disuse.  It is likely that the stone found was in use at the end of the 19th century, between 1850 and 1900,  and was fractured. Then some neighbor may have taken her to where she is now.

Because   there are already equal pieces in the Cornelio Moyano museum  and, mainly, to the desire of the neighbors, the authorities plan to build a   park  or walk leaving the stone where it is. They consider that it is the heritage of all and that it would culturally enrich a place of Mendoza. There is already a mountain bike track, and the neighbors want to have a small park to enhance that heritage.