Home People As we are The Cafetín.

What happens to the porteños with the cafes? 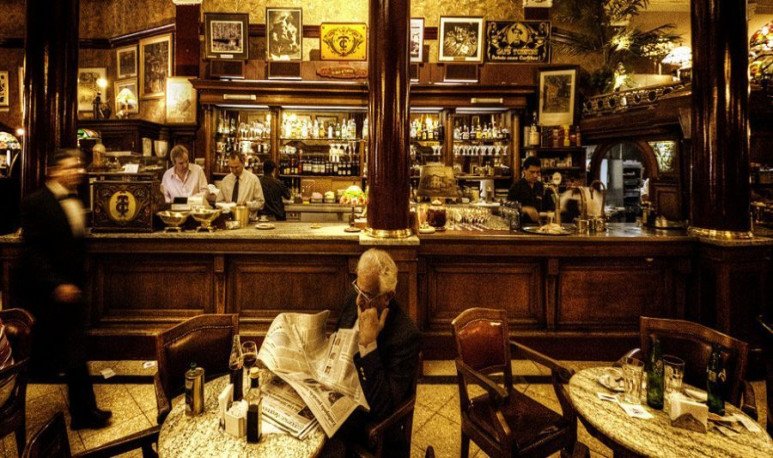 In Italy  coffee  is taken from a stand, as if it were a shot of tequila, or, for the older, among whom I find, a glass of gin. Compared to ours, the taste is more intense, the temperature slightly lower and the higher concentration, so the caffeine dose takes effect immediately. That is, they drink coffee because they like the taste or to wake up or to warm up in winter. But it's fast. Like they're taking an aspirin. Poor.

Buenos Aires is one of the cities with the most  bars  in the world: there is a “café” every two blocks. The  Argentinean asks for a     cut    and lasts 45 minutes. In the middle he works, talks to friends, writes, reads, pays the expenses and finds the son's school. We don't go to the cafes, we live in cafes, a place we leave for showers and to sleep. We watch matches of any sport, read the newspapers, we play chess, we become boyfriends, we abandon our girlfriends (or they leave us, which is usually more frequent), eat a bite, have breakfast, lunch, snack and dinner. If it's cold we order coffee with milk, if it's hot a soda. If we get caught eight o'clock at night we're already going to beer and if it's done later we go back to the cafe, the last before going to sleep.

The Greeks considered agora to be the most important space of the polis, because it defined the issues that influenced society as a whole, politics, laws and everything related to the common good were debated, because it was the space that belonged to everyone and was nobody's. We have our own modern agora. The name changed, we call it coffee. What didn't change is his role: it's still the most important space of  our cops .

If we talk about cafes where we could stay and live, we can't stop naming The Violets. This place was declared a remarkable coffee  by the City Government, that is to say that due to its career, architecture, antiquity and tradition it is considered of cultural interest in Buenos Aires. In addition, in 2017 Las Violetas was voted by the neighbors as the best notable  coffee  in Capital within a list of 92 colleagues. Its  magic , nostalgia and the loyalty of its customers is undoubted.

Las Violetas is located on the busy corner of Av. Rivadavia and Av. Medrano, in the heart of Almagro. But, entering through its glass doors, the hustle and bustle of the neighborhood stops and the world is suspended. The movement of the street loosens to give rise to other harmonic sensations that we live from every sense. We can hear the murmurs of the conversations in the living room, the noises of the cups leaning on the plates, the hasty steps of the waiters to attend the tables. Also, we can rest our gaze on the stained glass windows and curved glass doors, stained glass, marble and columns that wrap the whole place. And not to mention the aroma of bakery, cakes and sweets that come out of the kitchen and tell us that we are going to taste some delicacy. It all reminds us that sitting at that table is the recreation we deserve.

Violets retain a Buenos Aires ritual that travels from generation to generation. And that age mix is perfect. The cafeteria shows a stage with tablecloths, furniture, coffee machines and crockery from the 1800's and, at the same time, a QR code to scan with the cell phone and that diners add more interaction to this experience.

Because going to Las Violetas, without a doubt, is that: an experience. A moment that we give ourselves and those who accompany us. Not only does it allow us to enjoy a delicious coffee with cake, but it invites us to take a break, to live a moment as if we existed in other times, when everything was quieter and simpler.