Jana might be teaching pilates in Rio de Janeiro, but prefers to do so in the capital of Santa Fe. 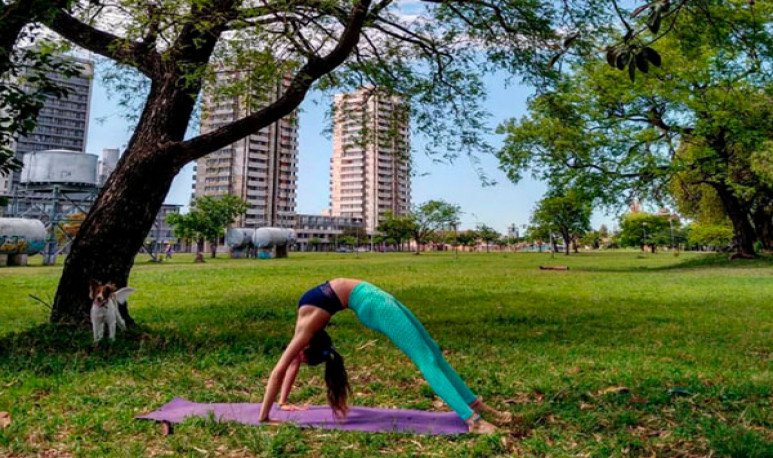 Jana is from one of those many paradisiacal places in Brazil. Nothing more or nothing less than the State of  Rio de Janeiro . The town where he was born and raised is called Barra do Piraí. It is less than 100 kilometres from the emblem city.Its village is characterized by being in a very important region for the production of coffee. It has a world-class water park.

Jana is a teacher of pilate s. Surely, she would have had no trouble living from her work in Rio, or in her own village. However, he painted the thing about leaving the comfort zone. So much so, that her search and heart brought her to  Santa Fe's capital . As a couple with an Argentinean, two and a half years ago he decided to follow his love to our lands. “Indeed, I always wanted to have the experience of living in another country. I wanted to know another culture, to learn another language. I liked the adventure of  knowing the unknown . But besides,  I fell in love with a Santafesino .” Jana's sincerity puts us in an inverse situation to the most common, in geographical terms. I mean, I don't have the statistics. But I imagine that out of every ten couples that form between a Brazilian person and a Santafesina, the decision to live together must go about eight or nine times to the side of the Cariocas beaches.

What do you like about Santa Fe that determined you to come here, when you lived at the touch of Rio's magic?

Just as Rio has Christ or Sugar Loaf, Santa Fe has its suspension bridge and its imposing Lagúna Setúbal.  “ I love watching the sun set on the waterfront, while people walk or exercise. People here are great, they've always helped me with the best possible vibes. They have always opened the doors for me to work and do what I love most: give pilates classes, while applying my physiotherapy techniques.”  Clearly, the human factor is seen to have a great influence on Jana's decisions. And highlights a feature of the Santafesinos : “You are very polite.  All were always and are very nice to me, everywhere.”   ( Yes. Jana speaks in non-binary language argentinian version).

“ What I miss most about my country is the joy of people,”  says Jana without a doubt, and clarifies: “ It's not that you are not happy. But, for example, I have a habit of greeting everyone on the street. They don't always answer the greeting here. But I keep waving the same, haha. It's not easy to live away from family and friends, but it's nice to be in a place where people welcome you with affection and good vibes.”  And, at this last point, Jana highlights something that is one of the great prides of Santa Fe.  “ There is a lot of cultural activity here too and I love that too. From Rio strange going to a bar and having a group of people playing and singing, and that not necessarily such people are friends or acquaintances. The cariocas simply stick around and get together to have fun. But that here is very well replaced with cultural and artistic options, which are many.”

“ One thing that I would change in Santa Fe: I would set up a schedule to pay taxes. Many times I worry late about my morning activities and when I want to go to pay I already closed all the premises.”

There's nothing to give to the santafesina nap. That is very good for us and foreigners find it very hard to incorporate. So, if you're thinking about coming to live in Santa Fe, don't doubt that you will be greeted with much affection. But paying taxes on the nap is going to be hard.