Home People As we are That majestic flight

The Andean condor is the animal par excellence of the Mendoza. Raise flight between the highest peaks of our Cordillera. 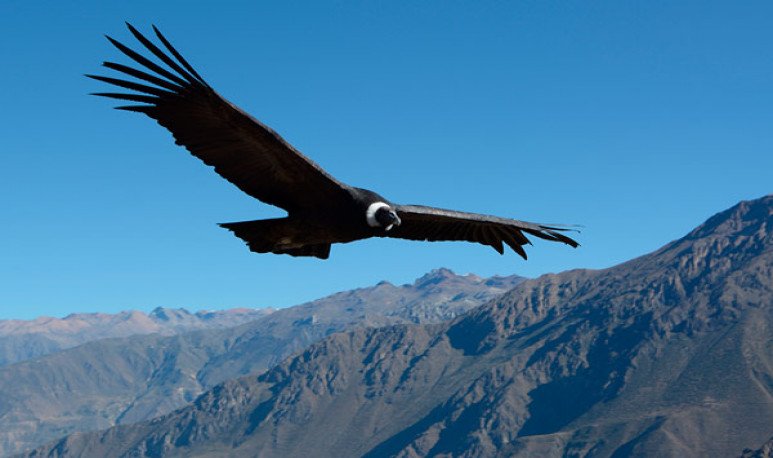 We Mendoza take it as their own, as if we had given birth, created or invented. The Andean condor and his elegant flight are ours.  We pointed it to the tourist as if it were something of our property.  This is one of the best ornaments that our sky has. Watching it keep flying with some cloud and the blue of our  high mountain  sky is an indelible postcard. That is why we can say that it is our traditional bird.

The Andean condor is  among the largest birds in the world capable of flying .  Given its large weight (up to 15 kilograms) and the imposing wingspan of wings (3 meters),  you need some help to stay in the air. Therefore, these birds prefer to live in windy areas, where they can plan over drafts without great effort.  Andean condors live in mountainous areas, as the name suggests, but also near the shores , where sea breezes abound, and even in deserts with strong thermal drafts.

These condors are usually black, but  have a characteristic white necklace, plus some markings of the same color on the wings.  Like their relatives, Californian condors, the Andeans look  bald heads .

Condors are vultures. That is why his accurate eyes are always attentive in search of carrion, which makes up most of his diet. They prefer to feed on large animals, whether wild or domesticated, and by consuming their bodies they perform an important job as sweepers of nature.  These birds lack the sharp claws of predators,  but they can storm nests in search of eggs or even chicks.

These long-lived birds  have survived more than 75 years in captivity , but they reproduce slowly. Each breeding couple has only one breeding every two years, and both parents must take care of it for a whole year.  The Andean condor is a threatened species, but its situation is much better than that of his cousin from California . There are currently about several thousand South American condors at large, and reintroduction programs are working to raise their numbers.

Since 1958, the Mendoza has the monument to the   condor  located at the intersections of eastern access and south access in Guaymallén, Mendoza.  WeMendozaworship this work  . It's just that it has multiple functions. It's quite a milestone to indicate a path or to give coordinates.  He is also the protagonist of repeated accidents where truck loads fall, as many do not know the maneuver, and end up overturning due to how closed the curve around the monument is. It is a tourist element because many times visitors stop in the area to take pictures and contemplate the surroundings.

A condor on a bicycle

After the death of  Ernesto Contreras , the mendocino cyclist who participated in 3 Olympic games and made the crossing of Los Andes in more than 5 times, nicknamed the Condor, an initiative was proposed for the monument to be called &Ernesto Contreras”. It would be the convergence of two Mendoza traditions such as the animal and the outstanding sportsman.