Home People As we are History of elevator

Applies to any Argentinean. The trip by elevator has its peculiarities. A story that more than one will have experienced. 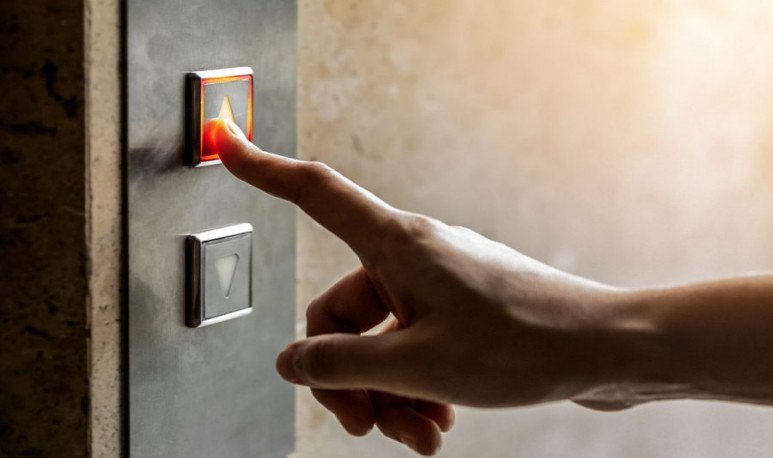 The journey starts at the time of calling him. In some cases the button is only one, then there are no major drawbacks. However,  most elevators have two buttons to request it: one with up arrow and one with down arrow.

There is the office man , with a shirt and tie, trousers and a dress bag, bright black shoes and a coverall that adorns all his humanity.  Enter the   public building  , ground floor, stands in front of the elevator  , the visor that marks the floor where it is located announces the number 4. Next, locate the button to call it and  press a button. Anybody,  random  . He doesn't know what it means, but he touched a button. He understands it's to request the elevator, but he has the doubt as to why there is another button down. There goes your index finger to squeeze it, just in case, it's not going to be something that doesn't come.

Six seconds pass, the elevator is still on the 4th floor.   Patience  is exhausted.  Anxiety  beats him by thrashing.   There was a tail behind him  . A woman looks at him. Further back, a young man attentive to his own cell phone. That doesn't count. But at the end of the row of 4 people, an older but well-standing man is attentive to the situation.  He wonders if what he squeezed will be okay. Just in doubt, play again. The bottom first and the top button after. He turns around and looks for the approving gaze of those present. They do not immute and, to top it all, some recruits are added to the line . Look at the stairs. That would be a good option. Escape from that everyday but awkward situation. However, his pride prevents him from it. Vain, wait for the  elevator .

He has a cocktail of  feelings  in his existence. Anxiety because the elevator arrives, there's a pile of files waiting upstairs to read. But it is also invaded by the pressure of the attentive and inquisitorial  gaze  of the woman who precedes it. At this point you don't know if she is really inquisitor or it's all product of her head. Watch the viewfinder that marks the way of the elevator. It's already on the first floor, upstairs. It's coming, it's over.  The digital light that draws the numbers finally marks the letters “PB”.  Stainless steel doors open, sliding, one leaf for each side. Atina to enter, but, remember, you must let those inside go down.  Now, come in. To the corner. It's not going to be something that has to elbow with your fellow travelers.

It's a cubicle, barely 4 people can travel comfortably. The doors are closing. Look at the button and number 6 is lit, but not the 7, where he's heading. What a problem! Stretching your hand between everyone, asking for permission, would be a  rude option. But asking the young man who is alienated with his cell phone to do it instead would sound imperative. Choose the first one.  Stretch your hand to the voice of “permission”. The woman yields. But the older man looks at him badly. It doesn't matter, he's got to the button. The seven lit up.

Saved by the bell

Nobody's talking. The elevator starts to climb. He doesn't know where to look. If he does it down, the young man will think he's rabbling his  cell phone . He decides to look forward, as to the horizon but which, in this case, is only 60 centimeters from it. Find the woman, who looks back at her. She's apichonous and she's on. A little to the left is the older man, still spiteful by the rubbing he had with his arm.  The elevator is on the 4th, it hasn't stopped. You have a long way to the seventh floor. He decides not to look at any of his companions. So, inevitably, he encounters a  paradox . Looking away is looking at the same people. The three walls of the elevator are covered with mirrors, projecting and repeating to their enemies. He begins to despair.   The bell saves him.

On the sixth floor the elevator stops. The door opens, the young man goes down, without taking his eyes off the screen. The older man gives way to the woman and escort her on the descent. Finally alone. The odyssey's over. Homework: the same as usual. Stop thinking about others, what will they think of himself.

The miracle of Malvinas