Home People As we are Faith does not burn

Faced with the phenomenon of burning grasslands, an altar in the interior of Santafesino seems to have been miraculous. 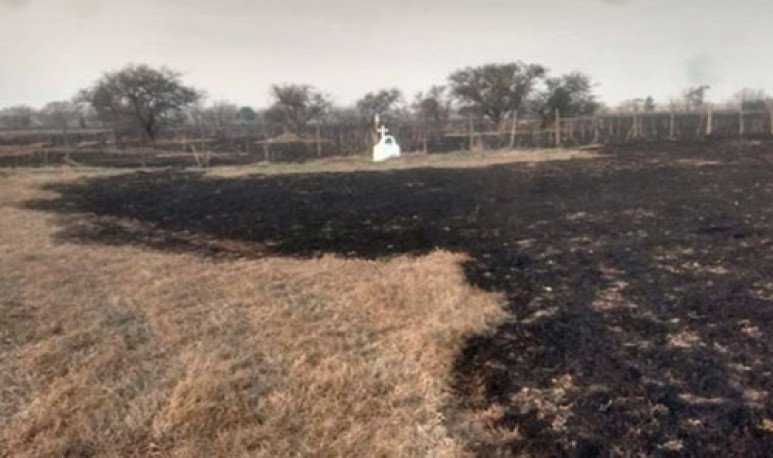 In the provinces of the Argentine coast, the indiscriminate burning of grasslands has  long  been central news. The fires reach unsuspected magnitudes and, despite the economic interests of those who reuse burnt fields to feed livestock, environmental damage can be untold. In this context, a situation of cinematographic borders occurred in the Santafesina rural town of Armstrong. This town is located about 20 kilometers from Cañada de Gómez, in one of the most prolific productive areas of the country.

I recently saw, on  Netflix , a very interesting series that mixes international politics and suspense with faith and religion. In  Messiah , an American village is devastated by a tornado, but only a humble chapel remains standing. Miraculous. The same thing really happened here in this Santafesino town.

Social media usurers shared the amazing find. The rangeland fire had originated in one of the benches and spread into a surrounding field. Volunteer firefighters worked for nearly three hours until he was suffocated, along with the assistance of police personnel. One of the firefighters who was part of the operation said that, running between fire and smoke, they saw with astonishment that the fire had not reached a small altar there. There was a whole circumference of dry grass around the cross.

The images of the photos and videos that go through the web are amazing. Records show that the fire managed to raze with everything but the small altar that lies on the site. This has been there since 1997, when a family decided to place it to remind a young woman who lost her life in a traffic accident.

Faith as an opportunity

In the entire agrarian region, as in the islands of the  Paraná coast , intentional burning is repeated in this time in search of cleaning up dry weeds or accidental foci fuelled by drought.

The place of this news was completely blackened by the ashes. As we said, only this simple construction that includes an image of the Virgin Mary, Joseph and the newborn Jesus, in a small manger is saved. Asked about the phenomenon, the father of the deceased girl did not hesitate to attribute the causes to a miraculous episode. “I believe and see Our Lady appearing. God took care of my crutite,” he said. He also explained that, in principle, he built a memorial shortly after the accident near the crossing and then, when the roundabout was built in 2010, he placed it on the edge of the fence. In addition to small sculptures from the Holy Family, the Lord also placed a cross and periodically carries flowers to remember his daughter.

Armstrong's volunteer firefighters don't come out of their amazement. It was themselves who, when they managed to quell the flames and the  smoke  dissipated, encountered this situation. As are the social practices of our times, they immediately took the initiative to film so that people see what had happened there.

After the hard work began to circulate the various guesses and opinions about what happened in the small town and the region. A miracle for believers or simply founded causes, such as the absence of high pastures, for pagans.

In the face of a year as difficult as the one in the world, the people of Armstrong agree to see a sign of hope in this story. They consider it an opportunity to be more  united  in the face of adversity.