Home People As we are Even the snowman takes care of himself!

To raise awareness about the coronavirus, in Esquel they put a beard on an icon of the city. 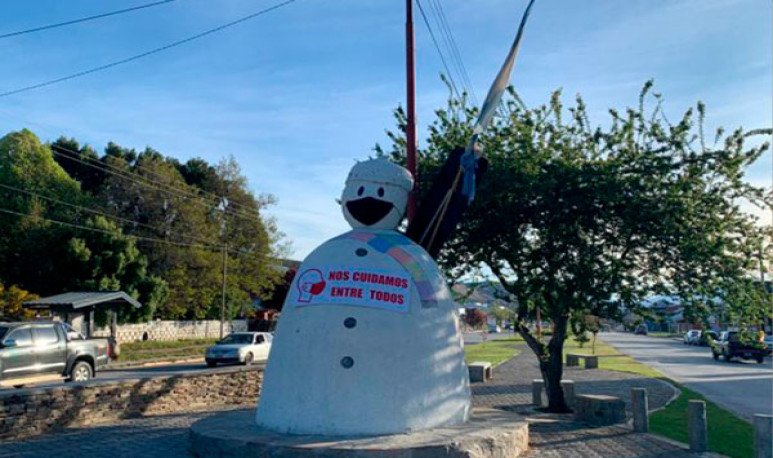 When the cases of   coronavirus   began in Argentina,  statues and traditional monuments with barbs and tapabocas were intervened in different parts of the country to raise awareness about the disease . Some joined the measure much later, since even COVID-19 had not said present.

One such case occurred in   Esquel ,  Chubut .  The Patagonian province was one of the last to diagnose patients with coronavirus.  Only  Catamarca  and  Formosa  had cases after the Chubutan territory . Cases started in   Trelew ,  Puerto Madryn and the conglomerate  Commodore Rivadavia - Rada Tilly.

Now the situation changed and in most of the Chubutan villages there were cases of coronavirus. From small villages such as Telsen to the aforementioned locality of the mountain range, which for a long time managed to prevent the disease from spreading through the tissue.

Faced with the growth of cases in the last days of October in Esquel, an awareness campaign was launched and the city's Snowman, an emblem for all neighbors, appeared covered with a cover and a message saying, “We take care of each other.” In addition, Mayor Sergio Ongarato asked the neighbors to take the necessary precautions to prevent the spread of the virus.

The famous Snowman of Esquel is a symbol of that city  located in the Chubuten mountain range  .  In 2019 he celebrated his first 40 years . It was created by Blanca Azucena Valoggia, who at that time was the director of culture of the municipality.

In addition to attracting the attention of every tourist who enters the city, he witnessed contemporary skeleton history and has been included in various celebrations, such as Fireman's Day, which is commemorated on June 2, when he was dressed for the occasion.

In August 2017, as part of the National Ski Festival, the doll was covered with chocolate  before a large audience came to enjoy the initiative, despite the low temperatures of that Sunday afternoon.He was also dressed for the occasion to celebrate the centenary of the Spanish Association, or raise awareness about breast cancer. Undoubtedly, it is an icon of the city.

Other examples in Patagonia to raise awareness about COVID-19

Returning to awareness and the request to take care of the advance of coronavirus, in different cities of Patagonia and the rest of the country took this initiative.

In  Viedma , the capital of Rio Negro , it was decided to take a similar action at the end of August, when cases began to increase. That is why the monument in homage to Francisco de Viedma dawned with a barbijo on the 28th of that month.

In   Neuquén  , General José de San Martín, who on his horse points to the Cordillera, was also part of the awareness campaign, just like the poet Marcelo Berbel, sitting on the bench where he wrote “Return to yesterday” also has his own. They were joined by  Rodolfo Walsh, Domingo Faustino Sarmiento and Manuel Belgrano.

Traveling south, in  Caleta Olivia , the " Gorosito “, the monument in tribute to the oil worker, was also intervened to ask the neighbors to take care of themselves. The initiative was on the part of a neighbor, who felt that he could not be out of what is going on in the world.

On the way to   Tierra del Fuego , in  Ushuaia   The intervention was carried out with the staff of the Ministry of Culture on the promenade of the Antarctic Pioneers, the monument to Eva Peron, that of General San Martín, Commander Luis Piedrabuena, that of Gunther Plüschow, Commodore Augusto Lasserre, General Güemes and the monument to the Mother located on 12th street of October of the capital of Fueguina.