Home People As we are Casa Casera: creativity at the pallet or pallet?

We tell you the story of these Cordoba who do represent us: using their creativity and various skills, they created a home in which to rest. 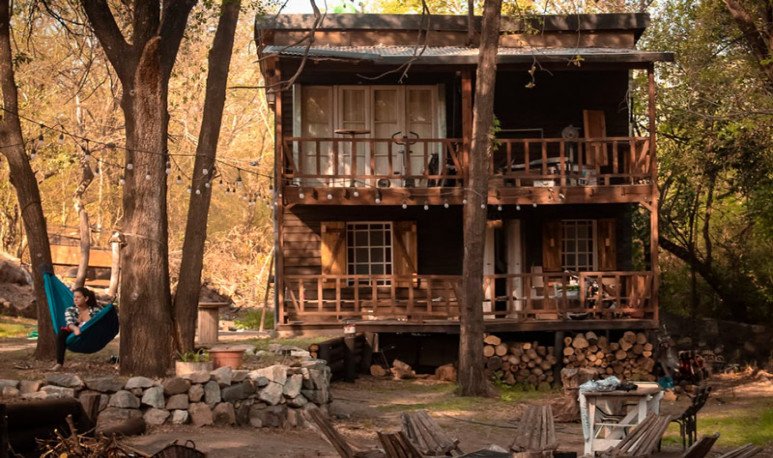 The Spanish variable  we use in the kingdom of Cordoba  already proves this : in these lands we have infinite skills to create and imagine.  These Cordoba are a clear example of  the versatility brought to the material. It is a couple of travelers who decided  to make the three R a home. With Recycling, Reuse and Reduction they made a small pallet house.  Sebastián Espina and Candela Blanca Díaz  wanted to settle  in one place, after traveling for a long time. They traveled for many years by bike from Alaska to Ushuaia . With an active traveling soul, a constantly moving body and an unstoppable imagination, they began their project.  The intention is to continue practicing nomadism, knowing places and sharing adventures. But, this time, with a  headquarters for technical stops.  That's why they  created a    space  in Alta Gracia, Cordoba, where they can base  while in Argentina.

This young couple had a lot and a limited budget, which was not very interested either.  Because the magic of building your own space came with the desire to work it with your own hands.  However,  Sebastian is a lawyer and Candela is a teacher of mathematics,  areas that do not have much to do with architecture. But  the challenge always motivated  these travelers,  this new project would involve eternal readings and various instances of training in a new subject: construction.

“ At first we had chosen mud. We read books, did several courses, built plans, but 2015 was a year of heavy rains and, if we wanted to continue with that method, we had to postpone construction for another year,” says  Sebastian. “ In the process of searching  materials aligned to  the philosophy of the three R  -reduce, reuse, recycle, Leave no Trace and upcycling-  we discovered that the automotive industry of Cordoba uses pallets of a very convenient measure to build using the balloon frame system, or wooden racks”.

In just under two years, they built a two-storey house without any help . A unique aspect, in the middle of a  dense native forest  and with the love that only the two of them know how to have in their projects. For the process, they took advantage of some skills for technical drawing and  relied on books  on self-construction. Finally, with the construction finished,  they proceeded to baptize it: “Casa Homera”, would be the name of the eternal refuge of these adventurous souls.  This space was consolidated more than a house, with simple rooms, rather than a wooden structure. It is the  result of a personal search and a holistic understanding of life, that which understands the human being as part of a whole    .  “ We are aware that the duration of this house is probably less than that of a masonry house, but we believe that housing units in general end up being modified for obsolete or decorative purposes, and demolished after one or two generations.  We don't expect Casa Homera  to last longer than our existence .  That  is why it is made of materials that, once they have fulfilled their function, will return to the earth, in the form of manure”.

Creativity on the pallet

“ The house demanded about 100 pallets and more than 100 phenolics obtained from boxes in which the industry itself imported spare parts.  We dismantled them together with the boxes, board by board, and reused even the nails that we straightened one by one. These  pallets of different woods, especially pine,  were resold as scrap and measured 2.20 x 3.1 meters. They were made of  insect treated wood and well parked , so we avoided the problem of being attacked or deformed. With the boards we made the outer covering: floor, ceiling, kitchen countertop, bar and furniture, and even the ceiling suspenders, nailed and glued to reach the necessary length. As for openings, toilets, cladding and equipment, we resorted to demolitions and sales, also friends  and acquaintances who gave us  lags of their own works or remodelings. In the kitchen, the furniture under and overboard is made of second-hand mdf plates.  With the exception of veneers, insulation and plasterboard coating, the rest of the materials are all reused.”

No training, but with dedication

“ We are not architects, but we are encouraged to build.  I studied three years  of high school with a degree of master of construction, some technical drawing I understood.  The idea was to do something that we didn't like very much, which we didn't want to stay, but we fell in love from the first pilot nailed to the ground . We first drew the plan of a three-by-six cabin, but the famous 'as we are' led us to project 54 square meters covered and 18 semi-sheltered. We decided to assemble it on 45 piles made with disused electric poles, and  thus we avoided the movement  of the ground in a lot with certain slopes.”

“ The play took a year and a half. Candela and I did   absolutely everything:   from piles, electrical installation, water and sewers to heating, and even the perimeter stone fence, where our lack of knowledge is probably most noticeable. It was an amazing experience. Every little advance we lived as a finished work, and when the work day ended, as we left,  we looked at it with a smile of satisfaction . It has thousands of small defects, but also have housing built by third parties. The good thing about ours is that  we know each one of them  and we also know how to repair them.”