Home People As we are Before all adversity: Cordovan ingenuity

In these lands there is something that never ends and we exercise a lot: imagination. We tell you the story of a very particular invention... 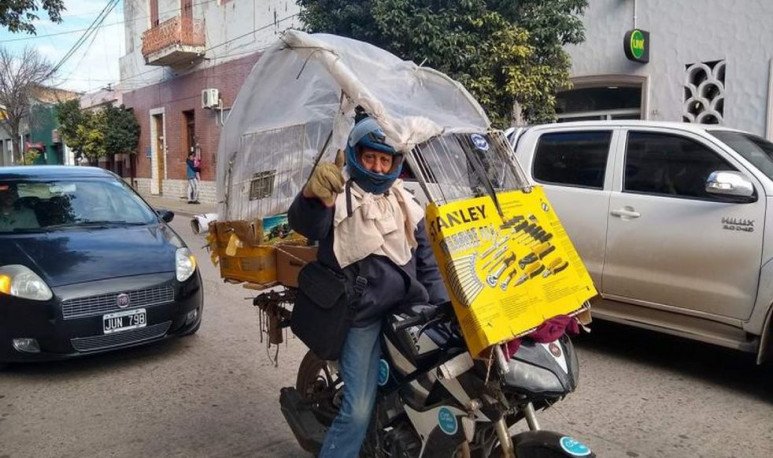 Because in Córdoba there are long times of drought, but, when the rainy season begins, it comes with everything.  In climatic matters, the fernet and the birra province is  dual and unstable.   Either it rains a lot , to the point of flooding all the cities, or there is a tremendous drought that the whole town suffers.

Between the rain and the cold

But the story of this gentleman was born  in the middle of a long rainy period, constant, abundant and tiring.  This Cordovan got up one day,  tired of moving  on his motorcycle and getting to destination  “made soup” .The creator of Traslasierra is a local worker, who adapted his vehicle in the best way to avoid dislikes and travel quietly. In this note we present the invention that has no waste, and that some motorcycle company has to incorporate...

The creator is a man from the town of Los Cajones, province of San Luis , but who works in Villa Dolores and is transported in a very particular environment. He refurbished his motorcycle  neatly covering it with a plastic that shelters his driver, rain and even possible snowfall.  The photo of this ingenious and enterprising Cordovan  has already been around the country . “ If there is misery that is not noticed,”  says one of his followers's comments on social media.  The truth is that man overcomes the inclement weather with a custom-made invention designed exclusively by him, with austere materials, but which ensure him a free transfer of mishaps.

Every day, this neighbor heads to his work, facing adversities . In  the winter times of Cordoba,  the area of Villa Dolores is painted white and usually has  as its protagonist the famous   “snow water”.  The cold that coves the bones seizes everyone who walks the streets and especially if you are riding a bike or motorbike. On the other hand , the hot febreros Cordobés , also have a constant: summer showers, with which you can soak up and reach destination all wet. In the early days of his life, this gentleman was driving on foot, eventually managed to buy his motorcycle and was able to start moving faster. Always accompanied by  the duality of the Cordovan climate: going cold and getting wet with the rains.  But one day, his ingenuity decided  to put an end to the situation of suffering and  proceeded to elaborate  what in his mind thought could work, ahellip; mototecho?

While the cunning shot has no name, the truth is that the images were disseminated by  the Traslasierra Noticias portal  and immediately, they were shared by endless people and social media users who left their comments. Obviously, most of those who participated in the publication,  praised this driver and ingenious worker.

“ Come on Maglanesi!“; “If there is misery, that is not noticed” ;   “the Argentine does not conquer the world of pure vague only”,  are some of the hundreds of messages of affection and amazement on the part of Facebook users  which echoed  what was published by the portal. It seems that  the Argentine ingenuity really has no end.

This neighbor of Traslasierra represents an example of everyday improvement and further accentuates that argenta characteristic that many in the world stand out. Our use of imagination and creativity for unusual facts. Now, we have only one thing left: to find this gentleman to see his invention and find a name for this particular means of transport...

Shall we conquer the world together?