Home People As we are A party of 15 to horcinazos

The community of Concepción del Uruguay entertained a young woman with a very ingenious party of 15 that involved cars and joy. 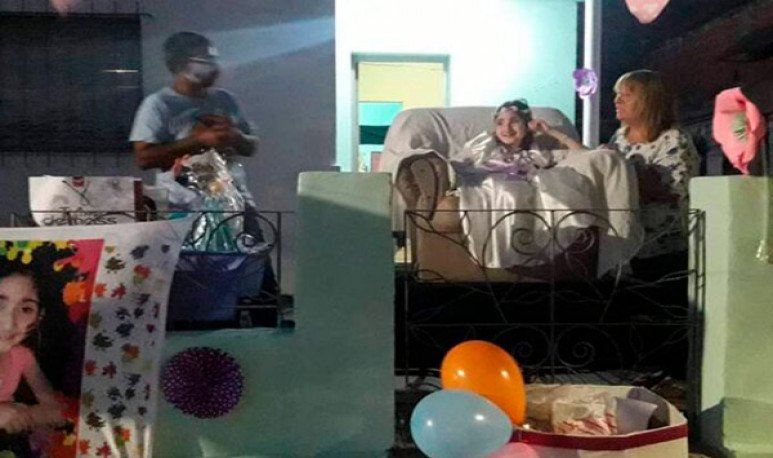 The intersection of two  streets  became  the scene of the meeting and the  dreams  fulfilled . On the one hand, vehicles braked in the corner and, on the other, motorcycles parading with the lights on. There, the heart of a teenager was filled with  love  and solidarity  thanks to her local neighbors  . Luna Caballero  went out with her parents and family, who loaded her on an armchair so she could live what was happening. But she was not caught unsuspecting, but she had her white dress with lilac, and a wreath of flowers on her head.  In this way, the  pandemic  did not win the pulseada and could have the party of 15 that it deserved so much .

It happens that the young woman was born with myelomeningocele, a type of spina bifida. Which led him to go through  more than 34 interventions and 16 cardiorespiratory stops , which he overcame with force. She  was born and raised in the city of Concepción del Uruguay , where the exciting event took place. It was an  idea of their relatives , who did not want to stop celebrating the birthday despite the coronavirus. So, people concentrated at the door of their house to sing happy birthday to him with music, applause and lots of speakers. The call was so great that it is not possible to give a number, just look at the crowd to understand empathy.

Let's not forget that the feast of 15 is a  tradition that many Argentine  teenagers  desire to realize . In advance the cotillion, guest list, dress and other issues are chosen. The celebration is presented as a before and after in the life of birthdays. For one night they become the center of attention and perform various rituals among their loved ones. Some of them are waltz, the delivery of roses and candles and even carnival in the early morning.

The doctors of the entrerriana girl recommended her parents to do everything in their power to make her happy. In order to follow the council, the latter  extended the invitation to citizens to participate in a horn . In this sense, Luna's mother told the reasons for the modality chosen for the celebration.  It's just that the young woman is a fan of the fierros and likes the sound of cars and exhaust pipes . In addition, the woman was excited by the number of attendees and defined it as a unique evening.

With participation and collaboration

The Municipality of Concepción del Uruguay wanted to contribute to the cause through the Municipal Council of Youth . The main goal was to accompany the desire of the family and the young woman to hold their feast of 15. They did so by contributing to  the celebration the sound equipment and contacting artist Cristian Ostera . He participated voluntarily with the musicalization of the birthday. The result was not only the entertainment by the musician, but also the possibility that the waltz could be dancing.  Thus, in the company of the best songs, the community enjoyed with distancing and honored a warrior who does not give up .