The residents of Godoy Cruz, and all Mendoza, can exchange plastic bottles for digital credits that can be consumed in the parking or transport. 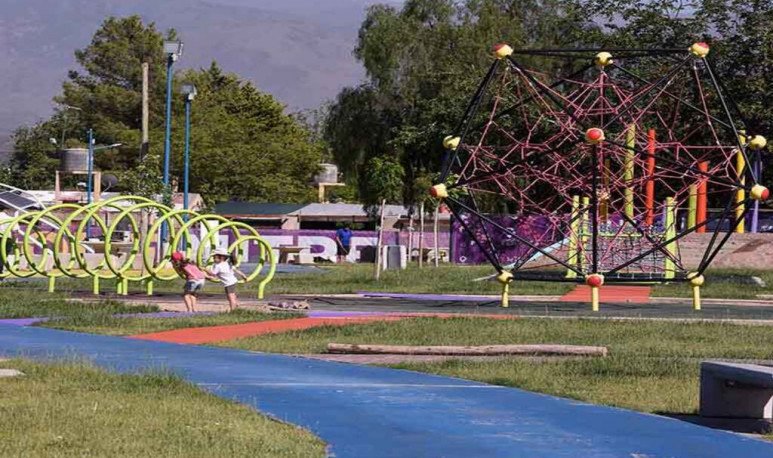 A few weeks ago,  the residents of Godoy Cruz have a green space in which they can oxygenate, distract and disconnect for a while from daily chores . But, in addition, Mitre Park offers an innovative, technological and sustainable service. It is the first self-sustaining park in the province, as it has  solar panels  for the generation of its energy.

In addition, the space has charging stations for electric vehicles,  a post from the program “On the bike”, games for children, tables with checkerboards and a new machine that receives pet bottles (plastic) and, in return, delivers a   QR code  to be scanned and thus add credits into a kind of virtual wallet. These credits may then be consumed to pay for parking, goods from the affiliated shops or public transport.

Yamel Aces is the Director of Environment and Energy at Godoy Cruz. He said this is the “inauguration of a park, which  not only allows you instances of recreation, but also, with its multimodal feature, people can leave their private vehicle and get on the   metrochannel . The parking lot has solar panels and its entry is through dry waste, such as pet bottles. In addition, you can opt for the use of the bike. It is one of the objectives that we have, for citizens to bet on sustainable modality.”

The park does not consume electricity from the home network, as it manufactures its own. “The park is self-sustaining because it  has solar panels that allow electricity to generate, and with that it lights up at night.”

The place is ideal for the installation of a free bike station. “You can use the program  “On the bike”. It is a free bike rental system, along with the City Municipality. One can hop on a bike here and leave it at a station in the Capital, using our bike paths, which are connected.”  And if you go with your own bike, and it's electric, you can play chess while letting your bike charge: “We've built  electric bike chargers. The goal is to promote sustainable mobility.”

Payment of the collective ticket

Mendoza has been talking, for a long time, of an increase in the bus ticket.  Something that happened in the last few days, remaining at 25 pesos. However, whoever can't afford it, can devote themselves to collecting some plastic bottles and thus get enough credits to do so. “Since March, Mendoza will be able to redeem credits for bus tickets , and thus move throughout the province without having to pay with money the transport service.”

For any of the consumptions, credits are needed. These are obtained on a machine that is installed in Mitre Park. The user must enter the plastic bottles and, at the end, request the QR code that will be scanned with the cell phone, from a given application. Immediately, our credit bank will increase, depending on the number of bottles we have entered.

Finally, it should be mentioned that the bottles received are for urban recuperators, who continue their usual activity.  “ With this we bet on the circular economy. It is that, urban recuperators collect dry waste and sell it in companies that make products with these materials.”