Maria Lazarte wakes up every morning to see the sunrise and make art on the beaches of Gesell. 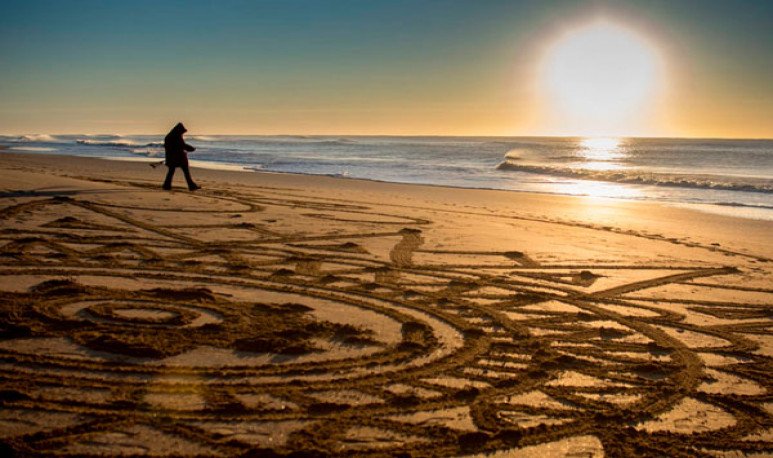 A sunrise on the beach . For those of us not around, and we have been dragging months of quarantine, the image becomes idyllic.  Maria Lazarte  enjoys her every day of her life. And not only that: take advantage of that magical moment, in which night becomes day, to  unfold his art in the sand . An  ephemeral art    that reminds us of something that the pandemic came to reaffirm:  there is only the present.

Quarantine came to shake us all the plans and all the routines. When the world was normal,  Maria Lazarte worked as an art teacher  in different schools and taught workshops, occupations that now went to the virtual format. Originally from Lomas de Zamora, in the urban area of the province of Buenos Aires, she always felt a fascination for the sea. Thus, after several trips through Latin America, he ended up in the beautiful city of  Villa Gesell , where he lived for 18 years with his 16-year-old daughter.

“ Today”  is the name of the artistic project that Maria has been carrying on for a few months. When quarantine began,  access to the beach was prohibited  even for residents of the spa town. Having the sea so close and not being able to see it was torture for the  artist . Then, when that restriction was lifted and the gesellins were able to return to walks along the shore, Maria had only one thing in mind:  to see the sunrise from the beach , something she had rarely done in the nearly two decades of residence she has been in  Mr. Gesell .

It was June 8, in the middle of winter, with the cold and humidity that reign in the vicinity of the sea. But that wasn't important. Isolation taught us to value those unique moments that are really valuable in life. Almost by instinct,  Maria began to draw on the sand.  The result: a  mandala  . He took a picture of him, at the very moment the sun was rising. He knew he wanted to do that every day, until his occupations let him.

It became a routine : watching the dawn, drawing, taking pictures and uploading them to the networks. It is only after that that that begins his working day. However, the routine is not only for her, but for all her neighbors: through their photos, while breakfast or perhaps even in bed,  the gesellins find out what the day will be like . The only climate factor that stops it is rain, which makes its ephemeral art impossible.

Anchored in the present

The way María Lazarte found to define her project could not be more accurate.  Today . Three letters. A word we say all the time, but the real meaning of which we may not be able to perceive. The  mandalas  that Mary performs on the sand are beautiful, but last as long as the whims of time want. It depends on the winds, the tides, the rain and, also, on the footsteps of the walkers, which at the moment are not many.  The ephemeral means that what is important is the moment, the experience.  Then it disappears. Although there are records left, of course. But the play is gone.

The value of this experience is to understand that life is just that, the present moment, what we have now. Today.  The past is made of memories; the future is made of expectations.  It's as simple as that.