A graphic humorist who took the national pulse. And in his eternal Clement found one of his best analysts with sheer laughter, reflection and delirium. 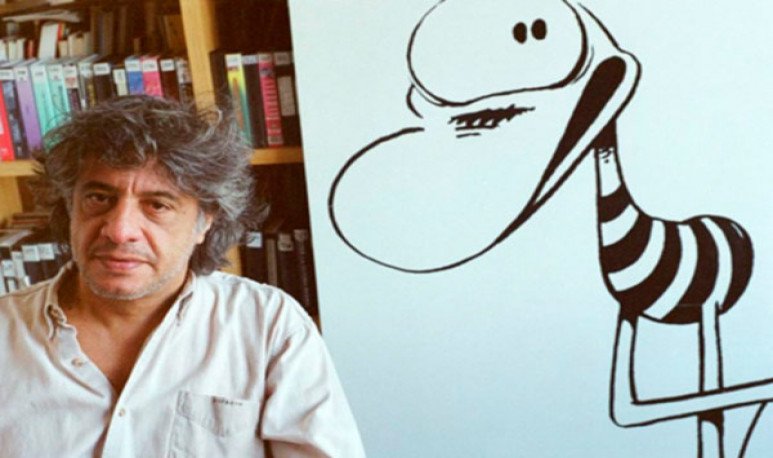 Carlos Loiseau, better known as Caloi (Salta, 1948 — Buenos Aires, 2012),  transcended the graphic humor to the  poetry  of his cartoons and characters, Clemente the most remembered , to settle in lunfarda language in Argentina's popular memora.  He redefined being Buenos Aires at the end of the last century and understood and addressed his fears, obsessions and hopes.  He also stood out in the cultural broadcast with the program  Caloi en su Tinta (1990-2008  ), a hotbed of animators who discovered talents without flags on public television. He was also a  remarkable publicist illustrator  since the famous Parliament cigarette campaign (1968); his posters for the eradication of violence in football that follow in many stadiums in Argentina are still remembered.

Born “circumstantially” in Salta, he lived almost all his life in the south of Buenos Aires, between Adrogué, where he studied at the local national school, and San Telmo de la Capital. Influenced by literary authors such as   Leopoldo Marechal  and Raúl Scalabrini Ortiz, who rummaged the metaphysics of the Argentine being,   Caloi  early developed his own line that coves in the bones, and the marrow, of customs and traditions, checking certainties, announcing doubts. The  debut in the magazine Tía Vicenta de Landrú with the strip “Artist, flor de ejecutivo”  is a primitive sample of his gaze on our contradictions. At the age of twenty he published “El libro largo de Caloi”, at a time of  boom and  renewal  of the major art of Argentines, with Quino  to the  front.

Simultaneously with his work in large print magazines and publicity,  Caloi entered the daily Clarín,  where he will work until his death, and on March 7, 1973 he published “Bartolo”. The next day this melancholy tram driver introduces a character as Argentinian as dulce de leche and Diego, “All my life I wanted to have a dog - cabizbajo murmured Bartolo - But today's dogs are all sedentary bourgeois. No one wanted to take a trip with me. However, I have this faithful companion who is my dog and is called Clemente”  Tiren papelitos, was born Clemente, the philosopher of the neighborhood mystique.  But Bartolo did not end there, who would accompany his friend until 1978 to leave him the central place, “Clemente, give a greeting to the readers,” said “Piiiii” responds; “They shocked him in the course of dog income,” says the driver.

Che, what are you Clemente?  “ I'm a little scared,” she says in a strip— because I've been told that I'm a kind of philosopher. And that's a lot of responsibility. I'm not a philosopher. Because philosopher is one who can consider the very nature of existence, what is one in essence - and that's what you did with the Argentines!- And I'm just a duck. I'm not exactly a duck... a bird?No, I'm not a bird either... I'm rather... I've been... what am I? Some kind of philosopher, can I explain?” closes with more questions than answers, our Plato of the Cobblestones. As if that were not enough, Clemente exploits in a massive strip the resources of text and drawing, and then color in the nineties, generating flown, bizarre, surreal, disruptive environments and dialogues, which  are a remarkable influence on his son, Tute . But as if it were not enough for a dibujito, a little more for Clemente, Mulatona, Mimi, Jacinto and even the Clementosaur,  Caloi during the dictatorship, at the moment of the most successful strip, replaced in the streets, and the courts, the gauchito toilet of the military with his popular Clemente . And the papelitos rained even though they were forbidden.  World Cup 78 came from Clement de Burzaco — there he created Caloi to his alter ego.  And we don't forget his criticism out of the frame then against the triumphalism of Malvinas.  A Cacho de Democracia owes it  to that which does not know well what it is, but we Argentines immediately recognize what it represents, the people, the neighborhood, the family, the friends, the loves, the freedom.

In the eighties he continues with his Clement, now in television version, is a screenwriter for Alejandro Dolina and is recognized in a multitudinous exhibition at the Centro Cultural Recoleta (1987) With the intention of “showing the plastic on television” pergenia “ Caloi in his ink”, a classic of national educational and imaginative TV,  “in the program I give an introduction that connects the films, or animations broadcast, with the great works of graphic humor, cartoon, painting, cinema... the living world of art... unexpectedly in this work we have managed to get many schools, boys, to engage with art”, admitted a training task that persists and will persist recorded with fire in the minds of thousands of spectators, “many artists have been seduced by audiovisual media after participating in the program,” Caloi closed in 1996, Internet, the networks, on the horizon. The prestige of the cycle, the sapience of its creator, made the cartoonist a jury and organizer of several national and international animation meetings.

In 2004 Clemente was named “Cultural Heritage of the City of Buenos Aires” —a corporeal figure is found on Paseo de la Carorieta in San Telmo.  On March 10, 2009, he was declared an Illustrious Citizen of Buenos Aires. In 2012 he received the Konex Platinum Award in the discipline Humor and Cartoon. But the recognition that most excited the comedian was in 2006  the statue of Clemente in Almirante Brown, Adrogué, Mitre and Diagonal Brown,  “I feel happy that that scribble I made as a little is again in the place of belonging and among friends” Dear Caloi, among Argentines always You'll be one more of the bar.  Welcome to the board.

“That's what I value: a cartoon as a means of expression in itself finished, without needing to be at the service of a political or advertising purpose to convey things. In this sense it has the same value as painting, sculpture or any expression of plastic. With Clemente I want to make an expressive weapon... a well thought out character is an expressive weapon” interview with the author at  LYS Actualidad en el Arte . May 1996. Year VI. No. 36 Buenos Aires

They say about Caloi

“ Caloi is graphic humor : his characters have fun at the beat of drawing. Undo intentions and thoughts. They are the social clock that marks I show time, here and anywhere.  Caloi lives his time . He is always himself in search of difference: analyst and analyzed in permanent combat. Against others and against himself. Sunday poet who dies on Monday . Behind Caloi there is always another Caloi, because Caloi like laughter has other meanings . You have to find them. This humor is free” Editor's Note in  Caloi Free Humor . Buenos Aires: Editorial Nueva Senda. 1972.