The Tucumano painter, Alfredo Gramajo Gutiérrez, was one of those chosen to decorate the walls of President Alberto Fernández's office. 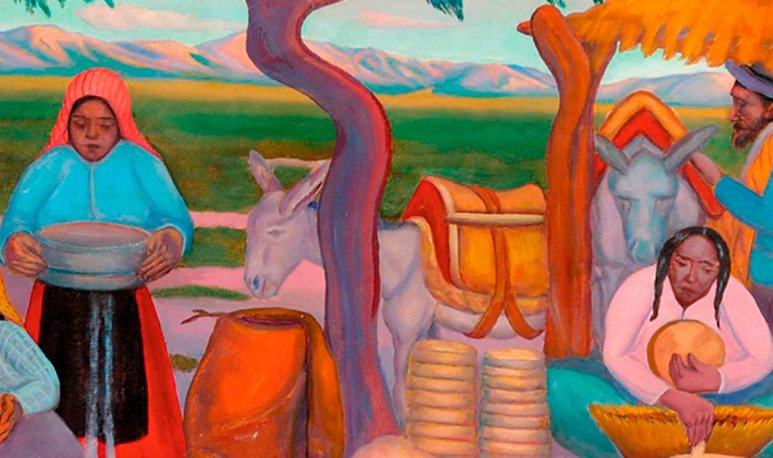 It is a famous painting by the painter Tucumano   Alfredo Gramajo Gutierrez   . The work is called “La salamanca norteña”. It's hanging on one of the walls of the presidential office at Casa Rosada. The president himself, Alberto Fernández, chose that work to decorate his office.

Who is Gramajo Gutiérrez?

In his paintings there are rural men and women. In their scenes, these beings appear in processions, in burials, in “velorios de angelitos”. They are unmistakable figures in the work of Alfredo Gramajo Gutiérrez, the Tucuman painter, called “the painter of pain”.

Gramajo Gutierrez is Tucumano. He was born on March 29, 1893 in the town of Monteagudo, at the crossroads of national route 157 with provincial route 329. One hour's drive from Independencia Square. His works impact painful compositions with a powerful authenticity. When he was very young, he settled in Buenos Aires. He managed to remain modest in the State Railways while developing his artistic vocation. He began drawing in a course of the Association Stimulus de Bellas Artes. He graduated as a teacher at the National School of Decorative Art. However, his passion was painting.

What were the origins of the artist?

It started as a self-taught. It showed the themes of the Tucumano and northern countryside, its characters, their customs. Celia Terán said that Gramajo Gutierrez's works were not influenced by the paintings of her time. “He was like the freak in the plastic arts,” he said.

He painted exclusively the peasant from Tucumán and northern Argentina. I knew that world by its origins. “I was born in a grey landscape, in a Tucuman village where the devil was on the loose, saturating the landscape with his breath and inducing neighbors into things of mystery and witchcraft,” Gramajo Gutiérrez once said.

What distinctions did you receive in your career?

His work won several distinctions. In 1956 he won the Grand Prix of Honor of the National Salon for oil, called “Un velorio de angelito”. Another very celebrated painting by the Tucumano painter is “Un burial en mi pueblo”. This work was acquired by the Government of France for the Luxembourg Museum.

In Buenos Aires, he lived in Olivos. He was a silent man, of few words and a lot of “life inside,” as his friends remember. Leopoldo Lugones had a praise for the painter Tucumano. “His painting is tragic, heartbreaking even when he laughs, almost fierce in a relentless truth,” he said.

Gramajo Gutierrez died in August 1961. Throughout his career, Tucumán never paid too much attention to this exceptional artist whose works, today, are sought after by collectors from the country and abroad.