The province of Tucumán became the first in the country to replicate the prints on the walls of the streets through the movement Acción Poética, of Mexican origin. Fernando Rios Kissner was the one who took the initiative. 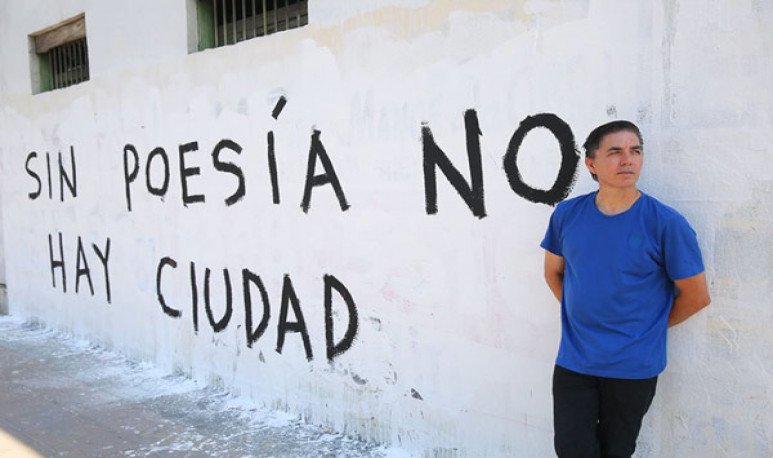 The literary movement  Acción Poética,  founded by Mexican poet  Armando Alanís Pulido  , was replicated on the Tucuman walls in 2012 by the hand of  Salteño    Fernando Rios Kissner . The cultural manager took the initiative in the Garden of the Republic, becoming Tucumán the first province where the phrases were stamped and then replicated throughout the Argentine territory, from Jujuy to Ushuaia.

In order to carry out this activity,  Ríos Kissner  had an email conversation with Alanís Pulido, where the Salteño told him that he wanted to replicate the movement in our country, specifically in  Tucumán , place where he currently resides. The Mexican told him that if he could do it, always complying with the rules arranged by the movement: find a white wall, make the letters in black and in capital printing, that are short phrases and did not have to refer to any ideological topic, that is nothing about politics, and neither of religion.

After that day, one night the salteño went to the streets tucumana to paint, without imagining the impact it would generate. He took a picture of what he had written and decided to upload it to his social networks. The publication was shared by many Tucumanos and had a good return.

Ríos Kissner , coordinator of Acción Poetica de Argentina, told the press that, at the beginning, he began to paint the walls that were nobody's, but those were quickly exhausted, and they had to be shared with graffiti artists, politicians, and in short, with many people. On the other hand, he clarified that it was not a graffiti, it was not the idea of going and storming a wall, but that it was about writing phrases that seemed important to them, so he felt the need for the walls of Tucumán to say other things, to “talk” about other topics.

The Salteño, who lives in Tucumán, also added new rules to the movement (with the consent of Alanís Pulido), for example that it should never be painted on a wall without the permission of its owner. This new measure allowed this practice to be done in the light of day, in the eyes of all. This new process took on a more social character and many people were encouraged to do so.

Once in Tucumán everyone met the Poetic Action movement and social networks helped to spread it outside the province, other places replicated this initiative. For example in  Santiago del Estero , Chaco, Mendoza, Santa Fe and later followed by cities of Buenos Aires such as Berazategui, Quilmes and Coronel Pringles. And so it expanded to neighboring countries, such as Bolivia, Brazil, Peru, then Paraguay, Nicaragua, Guatemala, Venezuela and all Latin America, always respecting the rules of the Mexican poet Alanís Pulido's movement and the new measure of Ríos Kissner.

In Peru they made the first bilingual poetic action murals in Castilian and Quechua. For their part, in Guatemala they were painted in the Mayan language and in the Triple Frontier they immortalized, in Guaraní, a letter by Rubén Blades that states: “We were born to many mothers but there are only brothers here.”

In this way, Poetic Action began in Tucumán, and the Salteño since he knew the movement knew that it could serve as a tool to give voice to others, those who want to express themselves through the brushstrokes.

Since that time,  Ríos Kissne r has visited more than a hundred schools, also made a mural of about fourteen blocks in poor neighborhoods of Tucumán. On the other hand, he worked in prisons, hospitals, universities and psychiatric centers. In addition, he has given talks for several years to Spanish students from a Palo Alto, California School, to carry out their own Poetic Action.

Regarding what this movement means for Salteño, he argued that it works as a tool that serves to share, and the process is the most valuable thing to him, because people are approaching, and you can express, that of being able to give him a space for his voice in those phrases, where magic is in being able to empower people through the word, told the press, the cultural manager.

In addition, from this activity,  Rios Kissner  was the one who has promoted the social fridge. It is an initiative of devised in the province of Tucumán, where the refrigerator is exposed on the sidewalk of their business with  food , and those who did not have to eat, could approach and consume food free of charge.

As we can see, “the walls are the printing press of the peoples,” as Rodolfo Walsh said, and Acción Poética materializes that great phrase through urban brushstrokes, a movement that emerged in Mexico 25 years ago and was replicated in many countries around the world, and where the first province in our country to make the prints was Tucumán, thanks to  Fernando Ríos Kissner .