Although it is because of the brush that La Boca is La Boca, the letters were the first to bring his soul from Riachuelo to the world. From chronicle and poetry to tango and rock. 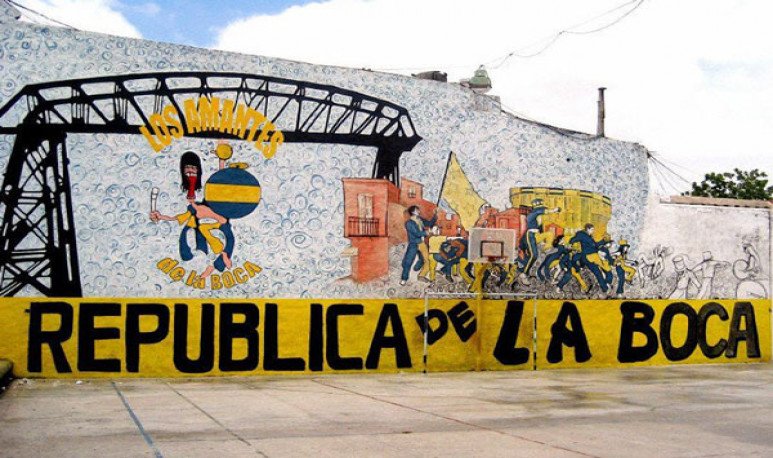 The lyrics accompanied  La Boca  from its birth. And they also built the myth of Buenos Aires despite Borgean claims about the foundation, “embelcos forged in la Boca.” Our first representations of the places near the “small river, Riachuelo”, of what we call the Republic of La Boca, come on the pallets and chisels of  Lacamera, Lazzari, Rebuffo  and, of course,   Quinquela .  But the first references were in the letters. The first mestizo historian of America, Ruy Díaz de Guzmán, said: “More Divine Providence provided the Riachuelo that has the city —of Santa Maria del Buen Aire— from the bottom” when the forces of the first advanced ones were failing; and they did not know how touacute; n of the anguish of the first Buenos Aires porteños that  Manuel Mujica Láinez fictionalized in  Mysteriosa Buenos Aires.

The descriptions of those marshes of few inhabitants, some recall a lonely gaucho Tío Ruiz, are scarce until the beginning of the nineteenth century, when the first pulperías appear, the Basque founders arrive and, then, the Genoese, and an Englishman Diego Brittain who buys a huge extension in the Chacras del Riachuelo de los Víos. Even in 1830 it was a vergel, says Echeverría: “The Riachuelo slips/from the great tributary Silver, /they shade its fresh orilla/old burdened willows/young sucks/acacias, fig trees, poplars.” For the porteños of the time of Rosas,  La Boca  were distant lands, just half a league from Plaza de Mayo (sic). In  Amalia, by José Mármol, it was “the emerald plain of the Boca... —and from the barracks of today's Parque Lezama, to contemplate — one of the most beautiful perspectives of the surrounding areas of Buenos Aires.”But already in the middle of 1850 things are beginning to change: “Passing the Bridge of Roses,” writes a wonderful chronicler, the Frenchman Xavier Marmier, about “la Bocca”, already in prophetic Italian accent — there is a very active movement and surprising variety of panoramas. The wooden pier built on the riverside is full of busy merchants, twine waiters who land cargoes from various sources.”

La Boca has a Genoese accent

Already the marks of origin were clear, the diversity and laboriousness of the “Hijos de La Boca”, as recognized the Genoese who requested the King of Genoa to recognize the Republic of La Boca. A terroir that grew to 60,000 souls in 1904 cradling two genuine porteñas expressions,  sainete and tango . “Bochinche de los guinches and pitosas mermaids and screams... downtown, via Almirante Brown”, appears in the sainete “La Boca del Riachuelo”, by Carlos Pacheco, where anyone could learn to play “live on a violin of old that came out pa 'Carnival in the Verdi”, one of the theaters that nucleized the boiling of a people imbued forever in socialist romanticism, which had left Hilario Ascasubi and Ricardo Gutierrez.

Despite widespread belief, La Boca was a babel of races and cultures at the beginning of the 20th century. That is why in the sainete del tano and the Galician the Turkish or the Chinese will be intertwirled. This is the chronicle of Felix Lima in  By the Chinatown of  La Boca  , where it appears, “when we go to the laundry and ironing workshop located on Brin and Necochea street, we stumbled upon the move of an eastern  lingera . A Chinese guy was flying a bamboo flask and straw adorned with dragoncitos and printing paintings. 'One weight, assumption dock', we say, to which the Chinese who from  pamela  —  silly,  in lunfardo— went to Paraguay, replied, 'You want one five, boeno, they're tré trunk, Hey boeno!'”, in a cultural encounter, a mixture of languages, which foreshadows the newspapers that are lived in Belgrano.

Although not all the chronicles were so picturesque. Many denounced the harsh conditions of a neighborhood that lived on the treasures that came from the sea. In  Juan Bialet Massé  's famous report on the working-class situation in the Centennial, you can read: “The discharge of coal is terrible, without protection, the enormous risk of breaking the gynches with 70 kilograms of load... the dust that is capable of damaging the lungs … blackens the skin, sickens the eyes... the hatches on the floor swallow the workers... the loaders and captains mock the poor workers in a criminal way... the worker who is left with nothing, when they give him something takes it as a luck.” Socialism and radicalism, then Peronism, those of workerist and popular, fermented themselves in this environment of social injustices.

Nor is it surprising that the orillero and reo tango has emerged in these streets, from the brothels of Maciel Island, documented Agustín Remón, where dockers and presidents went together, to the corner of Suárez and Necochea that immortalized  Enríque Cadícamo . Or the lyrics of  “ Caminito ”  by Juan de Dios Filiberto and Gabino Coria Peñaloza, and that travels the world as a postcard from  Argentina:  “Caminito that time has erasted/that together a day you saw us pass/I came last time/I came to tell you my evil.”  Tango and La Boca is a single heart of Buenos Aires.  In 1939 Paul Morand in  Indian Air announced it to the four winds.“In  La Boca  it is where tango was born,” says the French writer, and continues, “improvised cosmopolitan, this is how to take it and love it. That rhythmic copulation that did not dance the viceroys of Peru or the European castes... tango is from Buenos Aires.”

In the middle of the century is already crystallized the image of the neighborhood, which Argentine cinema also reaffirms in its idiosyncrasy with films like  Riachuelo, with  Luis Sandrini.  The poet José Portagalo puts his metric: “Carbones de Quinquela, Arato, Facio and Vigo/Tangos de Filiberto, sobs and picardy/local color, tin house and its patios/that detract from the dream the grace of life”. Although times were changing as Pedro Orgambide notes in 1984, “many children of immigrants left  La Boca  and left the center; others migrated there no more, to the southern suburban villages, where they changed the wooden house for the garden residence or the small bowling for the large trading house. His artists were more faithful to him. Some crossed the puddle, went to Europe, but returned to the modesty of the neighborhood, to travel lovingly those streets that flow into the river.” And undoubtedly it was so, in a neighborhood that artists dreamed and made, and the rockers continued with lyrics and music. The  Manal  were the great minstrels of port culture, between La Boca and Dock Sud.“South and oil, barrels in the mud, abandoned barrel/dirty pond, water is rotting a forgotten shoe/ And the workers, smoking impatient, to their work van/south, a piece of this century, industrial neighborhood”, sing with milonguero air in “Avellaneda Blues” 1970. And closer in time: “Sun at dawn on the river sleep/who will give color to the water/who will take away my sed/will be the Rio de la silver/or the sun that saw me birth”, sang  La Mancha de Rolando.

Letters and images that are reborn in the bitumen stillness of the “little river”, and backgrounds of illuminated coloured cubes, those described by Bernardo Kordon from the Avellaneda Bridge, amid the “enervant stenches” that unhinged Ezekiel Martínez Estrada. And they continue alive in the move of young artists and writers, within the  creative triangle Fundación Proa, Museo Quinquela and Usina del Arte. In the 21st century, in  La Boca still run rivers of ink that pump into the heart of Buenos Aires.