Home People Art and Literature The painter of malon

Meet Angell Della Valle, author of La vuelta del malón. The portraitist of President Roca, is one of the most important painters in the country. 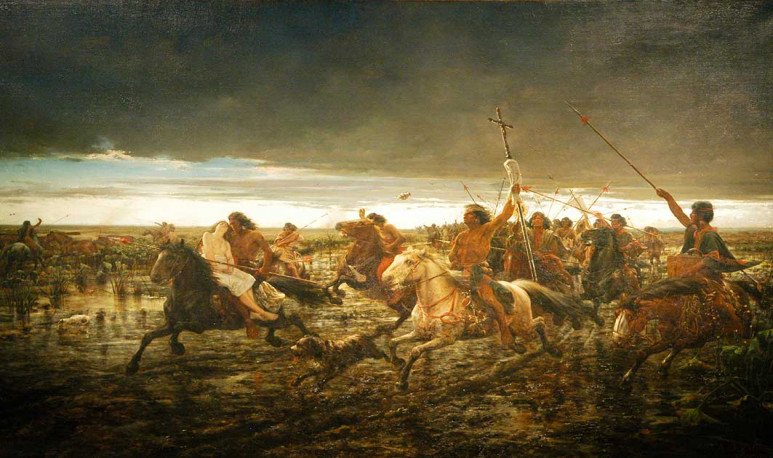 If there is an important painter in our country is  Angel Della Valle . Belonging to the Generation of 80, he is one of the main representatives, along with  Eduardo Sívori , of Argentine pictorial realism (And  La vuelta del malón , about which we talk a little below is its main exponent).

He began painting very young and at the age of 20 he had already traveled to  Italy  to perfect his technique (at that time in Argentina there were no art academies, just some other private master). In 1883, back in Buenos Aires, he installed the workshop in his parents' house. He was a great portraitist, perhaps that of then president   Julio Argentino Roca   is one of the most important.

But the area in which it stood out (and what would make it happen in history) was the  representation of the gaucho and the Creole and autochthonous realm  (never better used the “paint your village and you will be painting the world).

It was in 1892 when he changed his life: he first exhibited  La Vuelta del Malón.  Initially, the painting was exhibited in a hardware store in the city of Buenos Aires. Some of the neighbors who passed through the stained glass window reportedly returned to their homes in  fear , not only because of the size of the painting (it is really imposing) but because of the realism with which it is made (also, of course, that the scene is frightening). Given the impact, it quickly went on display at the Nocetti and Repetto bazaar (there were no art galleries in the city), and then pass through the Argentine pavilion of the international exhibition in Chicago.  Today we can appreciate it at the  National Museum of Fine Arts.

Maria Gainza, renowned Argentine art critic, wrote about  La vuelta del malón : “In it the Indians are the demon who gallops to screams for the pampa in a rainy dawn. They looted a church and they carry crosses, calyxes, briefcases and even heads!; the stormy sky, which barely lets a little light appear, is a sign of the dark character of the malon. The civilized world, on the other hand, is represented by the captiva, a defenseless woman with white skin like marble who, from scare, has fainted on her muscular captor.”. It is important to remember that the work was painted as part of the “celebration” of the four hundred years of Columbus's arrival in America and Della Valle took advantage of its position: the idea of civilization and barbarism as staunch enemies.  As you can see, the crack is not something new.

Tips you can not forget to speak Cordovan

The hard penalty on Diego Gerbaudo for doping

Missing through the nose

A river of trash