Home People Art and Literature The gesture of Marcos Aguinis

Writer committed to freedom and democracy, author of best seller, Marcos Aguinis continues to explain the atrocious charm of being Argentine. 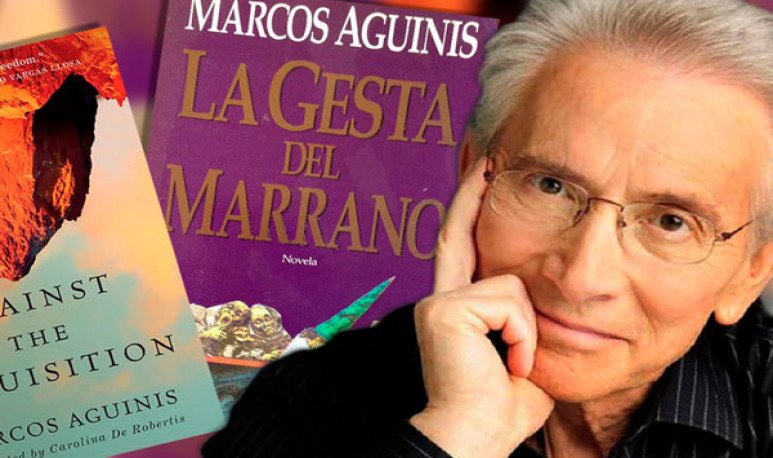 Marcos Aguinis (Río Cuarto, Córdoba, 1935) is an Argentine neurosurgeon, psychoanalyst and writer who focuses his  literary and intellectual work on respect for the other, and the values of concord against all dogmatisms, whether religious or political, taxes or self-imposed “Passive authoritarianism is manifested in nostalgia for strong and capricious, paternalistic regimes ”, he topped in “New Dialogues” (1998). He wrote books, essays and dialogues, gave talks and lectures, about his great obsessions:  justice, wisdom, guilt, discrimination, hypocrisy.  Between literature and political analysis, Aguinis represents a current of Argentine liberal thought that is in line with the project of the  Generation of the 80.

Born into a family escaped from the Nazi Holocaust, with relatives killed in concentration camps, Aguinis's life trajectory is aimed at building bridges and denouncing injustices, such as that inaugural scene with municipal employees Peronists  demanding bids from a humble furniture father in Cruz del Eje, Cordoba. Corruption would be another topic of his thought, “the Argentine parallel legal system,” he says. At that time he shared his time between drawing and literature, especially religious. But the piano becomes his first great love, he played in several Argentine theatres, and comes to travel to Paris where he shares experiences with Bruno Gelber.  However his interest in “knowing the depth of the human soul” makes him orient to medicine, first to psychiatry, then neurosurgery, and he would graduate in Europe with honors to return to work as a specialist doctor in the native Rio Cuarto for eleven to work as a specialist doctor in the native Rio Cuarto  for elevenchildren. By that time he had published his first biography about the Hispanic theologian and Cordovan physician Maimonides (1963)

Everything would change with  the Planeta Prize in 1970 to “The inverted cross”, the first novel by a foreigner that awarded this prestigious Spanish lauro.  Set in Latin America and its authoritarian traditions, in the confrontation of the young priest with the power appear the antidogmatic postures that will inspire his later work “The abstract characterization of the military that we find in “Letter Esperanada a General. Bridge over the abyss” (1983) and “New Letter Hopeful to a General” (1996), becomes more humane and apprehensible with the analysis of the attitude of the military in “The inverted cross” and reading “The matrix of hell” (1997)”, analyzes José Luis Gó Mez-Martinez. On the day they called with the novelty of the distinction, Aguinis was operating in La Carlota, and traveled several later in the face of the threat of prohibitions in Argentina and Spain for the anticlerical content of the novel.

A new turn in his life makes the writer specialize in psychology in the mid-seventies and settles in Buenos Aires. During the military dictatorship there was the controversial fact of the biography of Admiral Guillermo Brown, “ The perpetual combat” (1981), for some in order to please the dictator Emilio Massera, according to the writer in a “desperate” attempt by the DAIA to save lives of the underground detention centers.oacute; n.  The truth is that Aguinis also actively collaborates in the newspaper Convicción, linked to the Navy and Massera.

By 1983 he approached radicalism in Raúl Alfonsín's presidential campaign  “Does maturing mean repudiating Peronism? No, no way do I say this. But I do say repudiating  a certain kind of Peronism.  This particular type of Peronism has turned their backs not only by citizens who sympathized with him, but workers and young Peronists who know themselves worthy of something else ” said in the magazine Gente with the triumph of Alfonsín, who had it within the group of intellectuals advisors.  He was Secretary of Culture of the Nation of the Radical Government and created the PRONDEC (National Programme for the Democratization of Culture), which gained the support of UNESCO  and the United Nations, and launched intensive participatory activities to raise awareness among individuals about the rights, duties and duties and potentialities that are cultivated in real democracy. For this work he was nominated for the UNESCO Education for Peace Prize.

In “A Country of Novel. Journey to the Argentinean Mentality” (1988) solidifies Aguinis an urgent essay that breaks down Argentine myths and archetypes, especially its targets are the  “colonized mind” and “culture of contempt”  “  Every Latin American -every Argentine- is the field of confrontation”.oacute; n between a conqueror and an indigenous, between a winner and a defeated”  focused on this foundational essay in the old axis civilization and barbarism, reflection fruit of his departure from the public service and subsequent journey through the  Interior,  and that would continue to delve into the two volumes “The atrocious charm of being Argentine” (2001 and 2007 ). His latest essay “  Fire of Ideas”  (2017) is an invitation to think about the future by learning from our past.

Also psychoanalytic reflection, a profession he exercised for twenty years, is central in its production and public interventions, " disease is part of the same subject, it is the search for a new equilibrium - everything harmful you want - but which is not solves simply with an amputation or the choking of a drug”,  challenged magical solutions and overmedication in “The courage to write” (1985).

Critic of the  best sellers , who represented in 1985 in the words of the writer “the fear of recognizing ourselves in the authors who speak about ourselves”, Aguinis is an author of notable sales and translated into several languages. Fernández Díaz synthesizes Aguinis's place in national culture, a space in eternal discussion beyond the millions of faithful readers and the great titles of Caballero de las Artes y las Letras (France) and the Grand Prix of Honor of the Argentine Society of Writers (Argentina), “despite his enemies, he became a literary figure, and —always-he felt that Literature (so, capitalized) called him “  Aguinis will always be dangerous for those who despise humanism and plurality.

“A very good title is “The atrocious charm of being an Argentine” It is contradictory, of course, but it reflects precisely the contradiction in which we live. On the one hand we love it, seduces us, makes us feel with intensity the love of Argentina. We live almost always hurt by the course that our people follow, which is not about happiness, satisfaction, permanent creativity. We Argentines have another important contradiction. On an individual level, we tend to be very creative, but at the collective level we have frustrations. We can point out a lot of people in science, in art, in mechanics, in technology, in mathematics, in medicine. Bright people, who when they go abroad triumph, are looks with amazement. But the country is not able to move forward and progress. It is a contradictory people in this regard. What's going on?” Interview by Jorge Fontevecchia (Source  www.perfil.com )

They say about Marcos Aguinis

“Truman Capote said that when God gives a gift, he gives a whip. A whip to demand and not forgive fainting. A responsibility for God's gifts. The problem is that  Aguinis  had many gifts, had received many gifts, had many whips and self-inflicted many lashes. Cartoonist, pianist, doctor, neurosurgeon and novelist. One of the forms of hell could have been this: I condemn you to triumph in every human discipline you approach; I condemn you, thus, to live between the infinity of choices and the finitude of time. The freedom to be everything and the dictatorship of being able to choose only one thing. To conceal that inner hell,  Aguinis  joked quoting Chekhov, who dared to be both a doctor and a literate. “Medicine is my wife and literature is my lover. This may seem unserious, but I assure you that it is very fun”” article by Jorge Fernández Díaz on  lanacion.com.ar

“- For fear I abjured, cried, lied, confessed - murmured the father.

- My person disintegrated... he said what they ordered me.

- [...] Many times I wished to have faith in the dogmas of the Church to stop being persecuted. You've seen me in the services and processions: I don't always go to simulate. I focus, listen, pray, try to feel. But I only see a foreign ceremony.

It has endured too much falsehood and longing to show up without the mask of shame, cowardice and betrayal. Betrayal of God, others, oneself”