Florencio Molina Campos was the Argentine painter who best portrayed the life of gaucho. He did it through the Grotesque. A whole art. 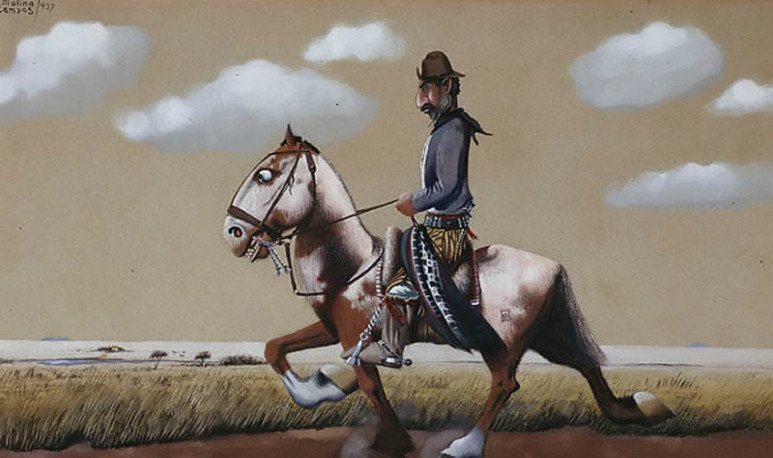 Grotesque gaucho is not the same as gaucho grotesque. Grotesque  gaucho  is quite an  art  . And no one bigger than Florencio de los Angeles Molina Campos when it comes to reflecting it.

I have a little but special link to Molina Campos. My great-grandfather, the first tane arrived in these lands bringing my surname, worked in the printing press that printed the Espadrilles calendars. Tens of thousands were made. They were famous back in the early 20th century. They were invariably illustrated by  works  by Molina Campos. Works that gave the  people  access to art for decades. And they approached, for the first time, the people of the city and the  countryside .

She was self-taught. Son of a family of landowners and military. And in the fields of his family he found art. He exhibited at the Rural Society and when President  De Alvear  saw his drawings, he appointed him to the head of the Nicolas Avellaneda National College class.

Perhaps it is from his affinity with people, that he expressed  gauchesca life like no one. And I say he expressed for the expressive, precisely, of his works. From the colourful, to the figures. Normally in brutal, blood actions, of the use of force. Both on horses and gauchos. He was undoubtedly a very cunning and sharp observer of reality. Men and  horses  that are in the likeness of each other. Eyes, noses, feet and big dentures. Tanned hands. Everything like escaping the bodies.

But it wasn't stereotyped  gauchos  that he painted. It wasn't a gauchesque mockery, the village. Not to the brutality of the jacket. They were realistic scenes, in Grotesque style. He portrayed life itself. The tasks and customs of the country people. People. Always people. Working, having fun. The very essence of country life, dotted, many times, with the humor that the cartoon adds. His work breathed life through the pores. Joy. Party. Until carnival. Faces that, more than faces, are masks.

From nothing, he was one of the greats of Argentine art. So big, he advised  Walt Disney  himself on several of his films.