Home People Art and Literature The Facundo of Sarmiento. First treaty on argentinity

Founding book of Argentine literature and coined the famous civilization and barbarism, united not found. From this misunderstanding, and others, we go through a little read and worst-quoted work. 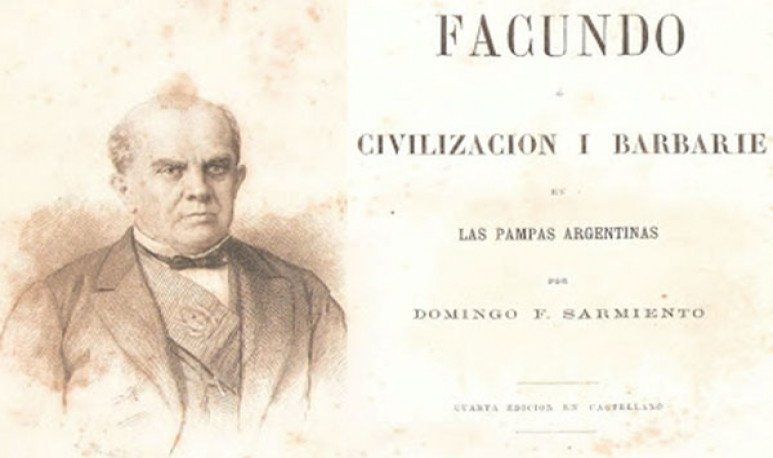 In  Argentine schools  , the phrase sarmientina “Ideas are not killed”, the inaugural of   Facundo or civilization and barbarism in the Argentinean pampas (1845) is repeated again and   again. The same  Sarmiento  says that he was painted in a bath in Zonda in 1840, escaping to Chile from the Mazorqueros and cardinals: “On the happier day I had painted in a room, I wrote these words on coal:  On ne tue point les idées ”. And he translates it to his contemporaries not on the friendly school date, but “men are cut off; ideas are not.” But  Sarmiento  himself makes a free use of the quote, which first moves according to the enlightened interests of the 37th Generation, and then conditions it to the national reality of the Buenos Aires governorate of  Juan Manuel de Rosas  . In fact, Diderot's original quote is “no gun shots are fired at ideas,” And, of course, in the letters to his friends he amuses the bewilderment of the feds who don't know French, and who send a commission of “notables” to decipher my “hieroglyphics”,”It even came from mouth to mouth that they thought I was saying 'Moons of big bitches, montoneros, one day they'll pay me, savages!', closes  Sarmiento , who will eventually like to be called “doctor montonero”. He also misses the original attribution in   Facundo   and gives it to another Frenchman who inflames his book ideals, Fortoul. This  gaffe  of a 19th century provincial intellectual allows  Ricardo Piglia  in his novel  Artificial Breathing  to point out that when  Sarmiento  himself imagines heroic in the face of Rossista despotism, and when he wants to shout the superiority of culture European before minions of the forex punched, barbarism and unculture sneak into him painfully. Civilization and barbarism are the quicksand in which   Facundo  moves from the first sentences.

“In an incompatible heteroclite world of provincials, orientals and porteños,  Sarmiento  is the first  Argentinean  , the man without local limitations,” says  Borges  in 1943 of a man who in the years of the writing of   Facundo   created histhat one of the failures of  Rosas , and of the Latin American countries, was “not to plagiarize Europe.” But above all, he was an almost unknown journalist, banished, and who believed like no one in the power of the word, and that would bring political glory, literary salons, invention of a nation and, of course, the presidency. To imagine yourself without local or mental limitations, without prerogatives of your environment, and to embark on the task of designing a political program, was the hard work of the ten years of exile in the transandine country. And in this construction of the  Sarmiento  of the history books, it fits   Facundo   a prominent place because it is a mixture of all genres that he had at hand for his personal project. At times autobiography, at times book on geography and travel, at times sociological treatise, there its chapters “Originality and argentine characters” or “Present and future”, closes with a liberal government program only possible with the fall of “Machiavélico”  Roses .

Here again appears that “y” that plunges us into a gloomy floor.  Facundo  is presented possessor of a “secret”, a deep one of the untamed and illiterate American spirit, which must be explained to the educated elites of the world, and then the writer in his eagerness begins to skate, not to know when to stop being barbaric America to be Civilized Europe.The anecdote of Quiroga's confrontation with a “tiger” (jaguar) somewhere between San Juan and San Luis, which ends with the “bravery” of the warlord fighting “with fear”, and finally humanizes it, blends with the subtle inclusion highlighting the figure of another warlord, Bolívar, to whom European biographers “remove the poncho, to present it from day one with the tailcoat”. All   Facundo   refers to Sarmiento's internal conflicts,  in fact, his writings could be read as a conflict against himself, inaugurating an Argentine style of refusing at every step. A literature based on oxymoron, and its black holes, which would be expanded by one of his best disciples, Jorge Luis Borges . And, of course, an inexhaustible source of its contradictions for its detractors and, finally, historical revisionism, which uses it as a fair duck to criticize conservative and oligarchic  Argentina  .

Roses ,  on the other hand, in   Facundo   , is the absolute evil, the “terrible shadow”, “the bloody dust”, an Argentine sphinx  , “half woman so cowardly, half tiger for the bloodthirsty.” And yet Rosas's merit is to be “calculator”, something  Sarmiento  recognizes as a sign of civilization even though “he has made crime, murder, castration and disgorging a system of government.” System, finally. He even admits that the Rossista government united the future country by iron, fought anarchy, mixed the inhabitants of the countryside and the city, and even the cob itself has its virtues to pacify the campaign. Moreover, he praises his Mazorqueros who “will annihilate the gauchos, malevos and compadritos in favor of European immigration”.

So  Rosas  is not the univocal barbarism, either, and the problem with it is that it simply gets in the way of the realization of the plans of the generation of  Sarmiento  .  Rosas  is a South American determination that must be overcome for universal progress. And who are the heroes who embody barbarism and civilization in this great romantic novel, at times? Nor are they clearly defined as they teach us in schools.They're not Facundo or Roses as we saw completely. And there is no one that represents civilization, not the Unitarians or their companions of the Generation of 37, who are ridiculed as “the mummies of the Republic”, but appeal to another that must imagine the reader with the clues among Argentines of the time, many whom they do not know.like the pampa, the “positive” actions of the characters and  Sarmiento himself. This “new man”, this civilized man who will be born from American soil, lives only in  Sarmiento's imagination.

One more from  Sarmiento y Rosas , who  Echeverría had accused of “inventing” the Sanjuanino with his vicious persecution. In fact, after the publication of   Facundo  , and amid a policy of rapprochement between Argentines and Chileans, Sarmiento obtains a “pedagogical journey” through Europe and the United States. On the eve of  Caseros, Rosas  reads  Sarmiento  's bulletins compiled later in “Campaign in the Great Army”. And, when the Sanjuanino arrives in Palermo after the victory of  Urquiza  and the troops of three nations, he sits at the desk of the Restorer of the Laws, and they reach him with those bulletins wrapped in a punched cord.

Facundo, wall and after

With the   Facundo   under his arm Sarmiento arrives in France and, insistently, gets a laudatory review by Charles de Mazade in his beloved  Revue des Deux Mondes  . Dear because from there he had taken the famous quote of the mountain pass many years ago. It was his international consecration, something he had worked for almost since he began to form  self-taught,  especially in French, the civilized language he considered superior to the barbarian Castilian.

From the exile Valentín Alsina, another vehement antirosist like him, wrote him an endless letter telling him that the pampa he describes does not exist, that he does not know the gauchos, and that he underestimates the potential of Argentina, as well as countless geographical and historical errors. The Sanjuanino thanks and answers that he will correct. He never does. Another is by Juan María Gutiérrez, a member of the Generation of 37, so stoned in   Facundo  , especially with the gross image that composes Sarmiento de Rivadavia . The poet Gutiérrez, although in the press praises the book, in letters he says that everything written with supposed rigor is “lie” Dalmacio Vélez Sarsfield told Sarmiento, in one of the many reissues of the book, where the only thing that was suppressed was the attacks on Buenos Aires during the elections:   “Facundo lies will always be better than Facundo true story.” You'll see that everything is a lie, Discepolin sounds background.

In a prologue to  Recuerdos de Provincia ,  Borges  wrote in 1944: “ Sarmiento   continues to formulate the alternative: civilization or barbarism. The choice of Argentines is already known. If instead of canonizing  Martin Fierro , we had canonized  Facundo , another would be our story and better,” he ends with the horizon of the “monstrous” Peronism taking houses and streets. Our first national writer replaces the “y” with the “o”, as we were taught in the classrooms, something that  Sarmiento  himself solidified as demanded “blood of gauchos” on the altar of progress. Perhaps a dialogue reading of the pages of  Facundo , without anachronisms, one that brings closer to the urgency of the biographical volunteerism of Sanjuanino, would bring us “not so much a viable scheme for the interpretation of the Argentinean and South American reality as the tension between his scheme and that reality, the failure of his system,” notes Carlos Gamerro. Get out of the hypnotic and vital reading proposed to us by this  fundamental work of the Argentines , pointed out from different optics Martinez Estrada and Piglia, and no longer demand from old battle formulas, written more than 150 years ago by a choleric cuyano ¿Cuhow will we get rid of the ghost of  Facundo ?