In Horacio Coppola's chamber, the passage of the City that became the Queen of Plata was light and shadow. 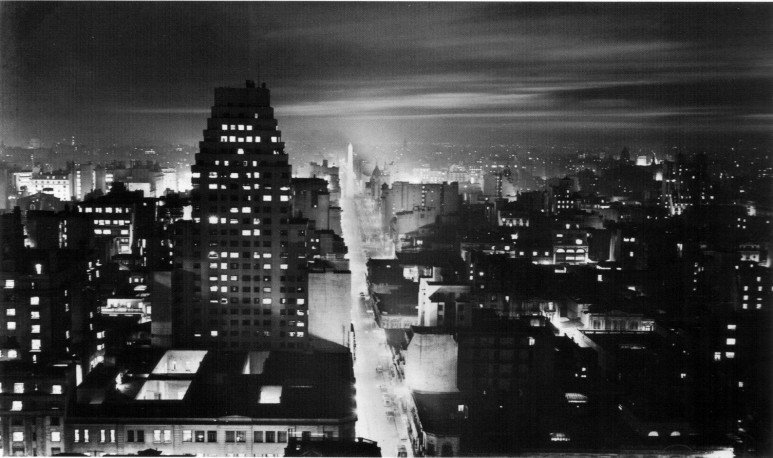 Horacio Coppola  (Buenos Aires, 1906 — 2012) is one of the founders of Argentine modern photography  along with his wife Grete Stern, Annemarie Heinrich and Anatole Saderman. Not only did he transform   photography , but he was a pioneer in  film and  advertising.

His beginnings in the intellectual circle of Victoria Ocampo and his interests in  cinema ,  Coppola founded the first Argentine cinema club in 1929, are combined with a photographic practice that starts from childhood in a self-didactic way. Two rooms in Europe, the last one taking contact with the modernism of the Bauhaus in Berlin, and meeting Stern, define a style designed in geometry, abstraction and  architectures   urban with poetic flight.  Coppola  may be the major portraitist of Buenos Aires  , as documented in the famous series of the thirties. Towards the middle of the following decade he embarked on another fundamental journey in his career, now to  Brazil  to document the sculptures of the maximum colonial baroque, O' Aleijadinho. And for the sixties he worked in Europe with a modern vision of light that revolutionized the Old Continent.

Praised by Marc Chagall and Henry Moore, one of the few  Argentines  who had his show at  MOMA in New York  ,  Coppola  was also a pioneer documentary filmmaker, there his “Thus was born the obelisk” (1936), and recognized teacher in the public sphere and private.

Fact: The residents of Ramos Mejía and Haedo enjoy the proximity of  Casa Stern-Coppola  in Villa Sarmiento, that obligatory point of Argentine intelligentsia in the 1940s and fifties, and architectural synthesis of the thought of the couple of artists. In addition, a splendid rationalist building built by Wladimiro Acosta under his Hélios system, which allowed lighting and natural ambience in the interiors. That's a smart building from 1939.

“ As a  photographer , as a filmmaker, I never leave the camera, I always give birth to the world that interests me. I look at it and I create the images inside me. Then the camera becomes the necessary element to capture those images. Both from the balcony of my house and touring the cities, I have taken pictures naturally, it's like when you learn to read and write without realying it.”

Interview with  Horacio Coppola  at  https://arqa.com/

They say about  Horacio Coppola

“ A universe of images or imagemas — as  Horacio Coppola liked to say -, looks that the  photographer has kept for all of us... to be able to walk again in  Buenos Aires , among its people, because, as  Jorge Luis Borges said when he saw a of his first photographs: 'Esto es Buenos Aires' ”.

What saves us: what does the merger quartet live