Argentine writer, essayist and teacher who influences Latin American thought with a new look of traditions and writings. 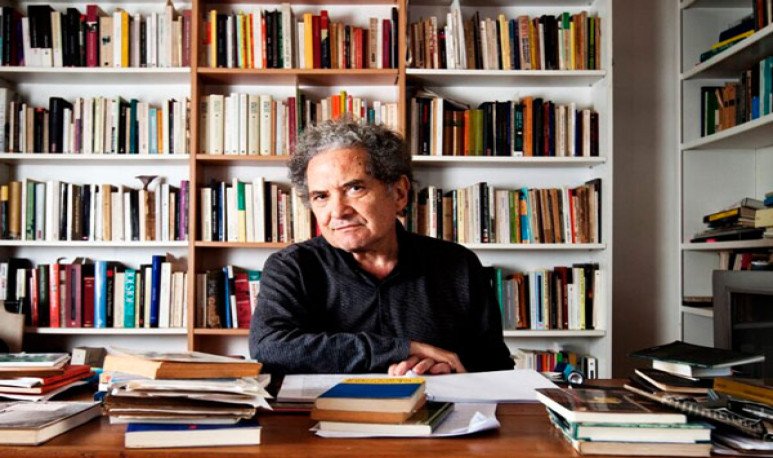 Ricardo Piglia (Buenos Aires, 1941-2017) is an Argentine essayist, writer and literary critic who reformulated the limits of fiction, the decible, and the thinkable outside the margins of the canon.  Current Latin American literature, essayistic, autobiographical and without strong genres, owes much to the aesthetic and political statements of the writer born in Adrogué , disseminated in his novels, stories, essays, editions and classes. In Piglia  reading  takes on an unusual dimension in the act of writing, and overflows the book object into a hypertext of us and now  “Truth has the structure of a fiction where another one speaks. We have to make in language a place so that the other can speak,”  he said

In the mid-sixties, he was based in Buenos Aires and began to collaborate in media and publishing houses, highlighting a collection of police called “Black Series” - the continued management of collections will be a great contribution to Piglia's culture, the latest in the Economic Culture Fund. For those years he joined the editorial council of “Los Libros” (1969-1976), a journal of bibliographic reviews with Beatriz Sarlo and Carlos Altamirano, with a circulation of 5,000 copies per month, and revolutionizing mass literary criticism with humanistic tools. He would move away in 1975 due to the media's support for Isabel Perón's presidency, “to  think that the president resists the coup offensive is not to take into account that the repressive, reactionary and anti-popular policy of the government, in fact, favors the coup d'état”, in a certain analysis, and in addition tos, who seems to prologue his first novel “Artificial Respiration” (1980),  written when he established himself as a professor in the United States, between Harvard and Princeton, where he retired in 2010.

The literary career took off in 1967 with a special mention of the VII Contest Casa de las Américas de Cuba which resulted in “Jaulario” (1967), his first book of short stories, to which would be added “La invasión” (1967) and “False Name” (1975). They already present in society their literary  alter ego  , Emilio Renzi, and contain jewels from the flight of “Homage to Robert Arlt” or “The Jeweller”. But the novel “ Artificial respiration” (1980)  brings to a new phase intertextuality, in quotes, parodies, stuffy orality and interverted academic and literary styles, which are a brand of Piglia.  “ Which of us will write the Facundo? “, he says in the novel, in a postscript by an Argentine exile about Sarmiento's magna work. Thus there is a phrase-force that condenses the criticism of the present and, too, much of the political and literary discussion of Argentines in the country, and the world, of the moment. As an extension of his statements in the magazine “Punto de Vista”, again with Sarlo, the fiction “revealed” proposes an allegory that crosses the persecuted of Rosism with the persecuted of the military of 76 “When “Artificial respiration” is published, in full dictatorship Argentina, could be read on the back cover: “Gloomy times when men seem to need artificial air to survive.” The allusion was clear but indirect. The novel could be read in political terms. But also strictly literary,” says Spanish Carrión. Two centuries are twinning because “we have the memories that have remained of the country and imagine what the country will be like when we return to it. That downtime, between past and future, is utopia for me. Then: exile is utopia” Such claims, or the reindications of the figures of  Arlt , Macedonian Fernandez or Witold Gombrowicz (the Tardewski of the novel), operate from there opening new fields of thought and national literature.

In the following decades he reinforces his literary and political theories in the novels, “La ciudad absenente” (1992) among others, or the tales of “Prison perpetuates” (1988). Their stories increasingly respond to the intersection or crossing of a superficial and another deeper plot, books and authors that appear and disappear dizzinously, in a hallucinated plot theory, and that end up with characters who have some kind of epiphany, of “enlightenment profane”

Towards the 1990s he affirmed a career as a screenwriter in television and film, which has high points in “La sleepwalbula, memories of the future” (1998), “Plata quemada” (2000) -a translation of his controversial 1997 novel, and, on tv, adaptations of “Los siete locos” and “Los siete locos” and “Los siete locos” flamethrower” (2015), both by Arlt, on Public Television. In the same public media broadcasts some reminded lectures of his about  Jorge Luis Borges . The new millennium is very active in the intellectual debate, with books of leading essays, “The last reader” (2005), “The initial form” (2015) and “For a future story. Conversations with Juan José Saer” (2015)

Translated in several languages, with novels brought to opera and cartoon,  Piglia is one of the last Argentine intellectuals with a thought that uncomfortable and opens questions, distant but not reactionary  “In “Five Difficulties to Write the Truth” -Bertold- Brecht defines some of the problems that I have tried to discuss with you - says Piglia in “A Proposal for the New Millennium” - and summarizes it in five theses on the possibilities of transmitting the truth. We must have, said Brecht, the courage to write it, the insight of discovering it, the art of making it manageable, the intelligence of knowing how to choose the recipients. And above all the cunning of knowing how to spread it... that would be the possibilities of a future literature or the future possibilities of literature”  In Piglia the strategy is  to illuminate the past  to to leave in sight the infamies of the present What will sustain future Argentine literature?

“Our most intimate memories, our most intimate feelings, our ways of living are multiple. Every decision we make closes a number of possible alternatives What happens if we try to make several contradictory decisions at once and keep it as open series? A political life, an academic life, a sentimental, family, sexual, religious life with each other very diffuse (if not clandestine) relationships” in his latest novel “ The Way of Ida ”. Buenos Aires: Anagram 2013

They say about Ricardo Piglia

“In a way, reading and interpreting Piglia — like reading Borges— is to plagiarize Piglia as a reader. Since I read, amazed, “Brief forms” and “Artificial respiration! Exactly fifteen years ago, there are countless times when I knowingly and unknowingly quoted him, revealing the source or stealing his ideas and assuming them as mine. Luckily, he thought that too and formulated it: “In literature thefts are like memories,” he wrote in “The ex-tradition”: “Never at all deliberate, never too innocent. Property relations are excluded from language: to be able to use all words as if they were our””” by the Spanish writer and critic Jorge Carrión in   https://www.nytimes.com/es/2017/10/01/espanol/america-latina/la-segunda-obra-maestra-de-ricardo-piglia.html