Pepe Perreta is an artist (so I see it and thousands of people) who paints Trapos. if you don't know much about football, get into the note. If you know, even more. 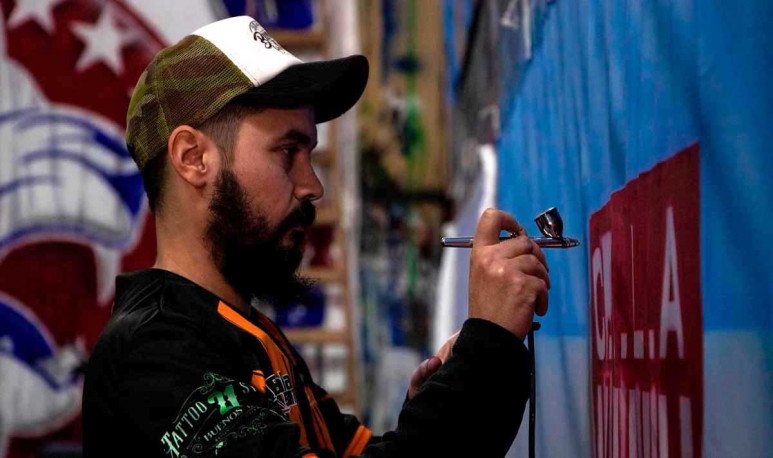 For those who do not know, Rags are the  flags  of the  swollen   football . And there is a gentleman who is not only engaged in it, but is highly valued. Between the swollen, of course.

So much that it transcended the barriers of the clubs. It also transcended  Argentina 's barriers. It has painted rags for Spain. Nothing more or nothing less than for the two biggest clubs. Barça (Barcelona;  Messi)  and Merengue (Real Madrid). Also, for PSG  France . And for the big clubs in  Italy .

He's art and he doesn't care if he has to paint for fans of clubs rival his beloved  New Chicago . Like  All Boys ,  Chacarita or Deportivo Morón. He shudders the same, with only the idea that a work of his will be contemplated and applauded by 40 or 50,000 people at a time.

That their rags have stories behind them, that magnify them. Like the one that Deportivo Merlo's swollen “gave” to his scorer, the famous “Ogre” Fabbiani. A very talented player, but always exceeded weight. Somebody carried it for chubby. And out of nowhere, Ronaldo's brazilian genius (suffered for the same thing) sent him a twitter encouraging him. Saying “chubby make a difference.”

It all started with a small flag for a murga. For the 15th birthday of a fana in  Boca . From there on, came an immense rag for the puffy of Boca. That premiered on the  River court, when public was still visiting the courts. The big five followed, of course. And promotion clubs. Everywhere they call it.

River's was also special. Because the old man was from River. But not only that. He was a laburant tano. I didn't think Pepe was going to keep a family with his art. Then he was renegating him. Until Pepe took him to the river court. The tano was pouting because, to make it look better, they went to the rostrum across the street. The rival. That day, occupied by... Mouth. When he saw the baby's rag, the tano broke.

Pepe's feeling and joy is always the same.  Popular  and massive art that moves, sometimes, to tears. Pepe loves that. It fills him with pride and motivates him. You never miss a “premiere.” For him, it's like the birth of a child. At heart, Pepe delivers his art without denying it to anyone. It's just that Pepe is an artist.