Aníbal Albornoz Ávila lives in Santa Cruz. He is a writer and now national news for his latest work of literature. We present it to you. 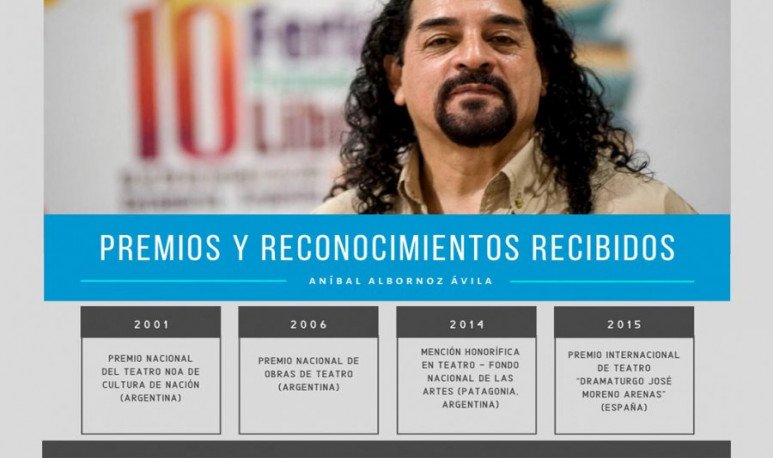 From the mining cradle, this playwright received the news that his work of literature will be published by El Trébol Ediciones.  The test of the altarpiece  consists of six theatrical texts  that had already been recognized in national and international competitions.

His recent work was attended by  several   “   friendly hands   ”  . One of them was that of César Victor Torre, a well-known cast director of the Comedy in Rioja lands. Another was that of a catamarqueño, Idangel Betancourt. This is a Cuban director who currently directs the Comedy Municipal de San Fernando, in the Catamarca Valley. Finally, that of a specialist in literary criticism, Patagonian Gabriela Luque.

But  literature is not everything in dramatic art . Therefore, there was also technical collaboration in the work  Aguas de lavar almas . Warmi Sosa was the curator and composer of the  songs that accompanied this theatrical text.  She was joined by musician Eduardo Sosa, who performed the musical transcripts. Finally, Alejandra Geraci's art was part of the book's cover  design  .

The proof of the altarpiece  incorporated the works “Waters of washing souls”, “The dawn of the Caupolican fjord”, “The cage of a man”, “The pairing of Ivanikha Gorki”, “Shards” and “Frida, the torrential flower”.

Some critics highlight the exquisite  pen  of its author. They say that Albornoz manages in this play to compose  characters with his own life, ready to go on stage . Therefore, El Trébol Ediciones does not rule out, in the future, bringing this literary work to the theater.

According to the author, at the beginning he had arranged with the editorial, to publish a songbook with poems of his authorship, and music by Argentine composers. From great friends he had harvested during these years while he was working. However, he then chose to take the most award-winning    theatrical  scripts of his authorship. Thus, a compendium titled  La probanza del altarpiece is born. A set of theatrical texts that are already on the lips of several national directors and that, surely very soon, we will see somewhere.