One of the pioneering Argentine artists, urbanist and architect, Pueyrredón paints a time of change and its protagonists. 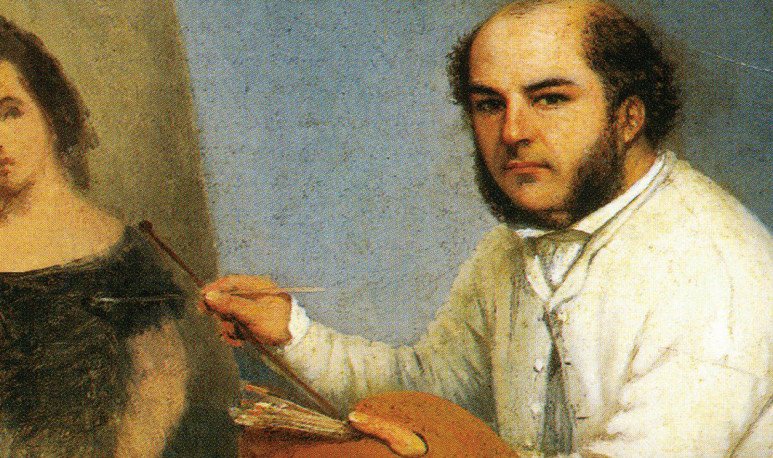 Prilidiano Paz Pueyrredón (Buenos Aires, 1823 - San Isidro, Buenos Aires Province, 1870) is an  Argentine painter who incorporated European romantic tendencies into the national portrait and landscape, fine observer of the customs and customs of a budding nation  “My name is Pedro Pablo Prilidiano Pueyrredón, poor painter who paints doors for little silver” was presented who signed the 237 oils, drawings and watercolors with the enigmatic PPP, for some Prilidiano Pueyrredón pinxit, in the habit in the rubric of Renaissance artists. At the crossroads between the city and the countryside in his palette, renowned builder and urbanist, the pioneer painter of Argentinity fixed a vivid image of the gauchos, and Buenos Aires after Caseros, which  was only recovered in the thirties of the last century by critics near Caseros. cultural nationalism   “Creole of soul and spirit” would say Bonifacio del Carril  .

Prilidiano was the son of Juan Martin de Pueyrredón, hero of Independence, and wealthy landlord of the north of the city, so he had no difficulty expressing his artistic desires, and they  had an early guide in the family slave, Fermín Gayoso.   For political reasons, faced with his family Juan Manuel de Rosas for livestock business with the  French , the family leaves for Europe in 1835, replaces Rio de Janeiro in 1841, and Prilidiano took contact with the tendencies of Delacroix's romanticism, and returned in 1844 to complete studies in Paris, where he graduated as an architect, and meets Sarmiento. He returned to Buenos Aires in 1849 in the months leading up to his father's death and  built the Azcuenaga Mansion, today the fifth presidential of Olivos, and the main house of the Bosque Alegre farm, now Museo Pueyrredón de San Isidro.   Before returning to Europe, supposedly because of a loving disenchantment with Magdalena Costa, and leaving an unfinished work of it, he  paints the famous “ Portrait of Manuelita Rosas”  (1851, MNBA)” Federal Colorado”, “position analogous to its morality and rank,” and “laughing expression”  were the indications of an  ad hoc  commission that oversaw the final representation of the “federal princess”. A letter in hand for “Tatita Rosas” and a friendly look gave up perhaps a change of attitude of the Regimen, less confrontational, more consensus, which would be aborted on February 3, 1852 with the Battle of Caseros. 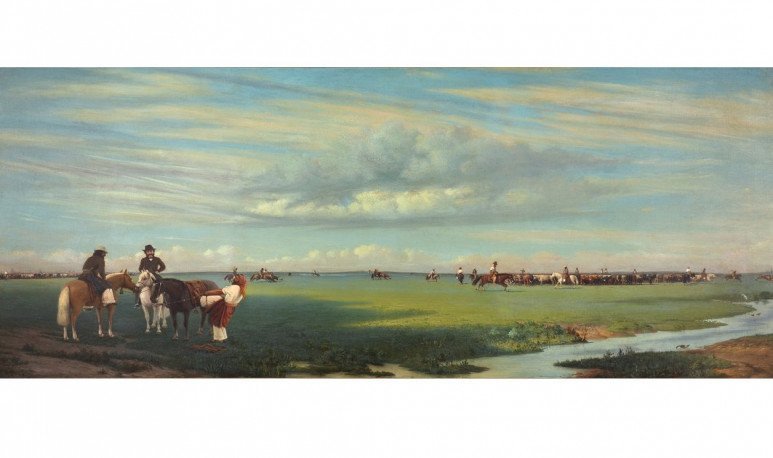 He would return to Buenos Aires in 1854, with the pictorial influence on the slopes of the Iberian peninsular picturesque, and for ten years he would be an  ad honorem  adviser of expansive Buenos Aires urbanism, eager to transform into a City-State. Installed in San Isidro does not abandon painting, even with the incessant orders, the renovation of the Church of Pilar, or the conversion of dry hollow in Plaza de la Victoria, current Plaza de Mayo, with the planting of 300 paradises plus the remodeling of the pyramid of Mayo “He painted the that he craved — in the farm of Pueyrredón — and sang pieces of his favorite operas (Giacomo Meyerbeer's “Los Hugenotes” per case) When they returned to the house of the barraca de San Isidro brought painted notes and partridges, Prilidiano was fond of hunting,” recalls his close friend Nicholas Granada.  Of those years are the paintings that recover the customs of the campaign around 1840, “ Los Gauchos ”, “Peace on the Ranch” —arbitrarily called “ ; A stop on the road” (MNBA, 1861) - and “El Rodeo” (MNBA, 1861). All naturalist, and extremely detailed postcards of peasant sociability where they appear in communion, and peace, patrons, pawns and Chinese, as well as archetypal figures such as ombú, poncho or mate “La Tribuna” would think of this series that exhibited “the ancient uses of our campaign that disappear day by day”  One years later Pueyrredón would paint “El naranjero” and “Esquina porteña”, pictures that announced the social and political changes implicit in the statement of the newspaper, perhaps the ghost of the immigration of that cart in “La Paz en el rancho” The painter stands as a certain visual reporter of a city that left with urgency the colonial peace of the riverine views of his “San Isidro” (1867)

In 1862 he settled with his mother in the fifth of the Five Esquinas, current Libertad y Juncal, and opened an atelier in Reconquista 49, which is the epicenter of the cultural move of Buenos Aires that dreams to disrupt the village by Paris “Very French, something licentious” was a usual description of Pueyrredón, who scandalized with the nudes of late romanticism in “La siesta” and “El baño”, both oils at the National Museum of Fine Arts.  The contemporary portrait stands out one for his father, at present at the Faculty of Law of the UBA, another dedicated to Rivadavia, in the best known print of the first Argentine president, and one to Garibaldi, dedicated to the Sociedad Unione e Benevolenza, that if we add the sketch of the oath to the flag of Belgrano (Udaondo Museum, Luján), give a family atmosphere to the gaze based on the mitrost, and liberal historiographic tendencies of the future  Generation of the 80s.

He died on October 30, 1870 from diabetes, and in the midst of a bridge scandal in Barracas he built twice — and ended up sinking shortly thereafter.  Federal princesses, gauchos and cities of tomorrow, Pueyrredón was one of the first to imagine Argentina. 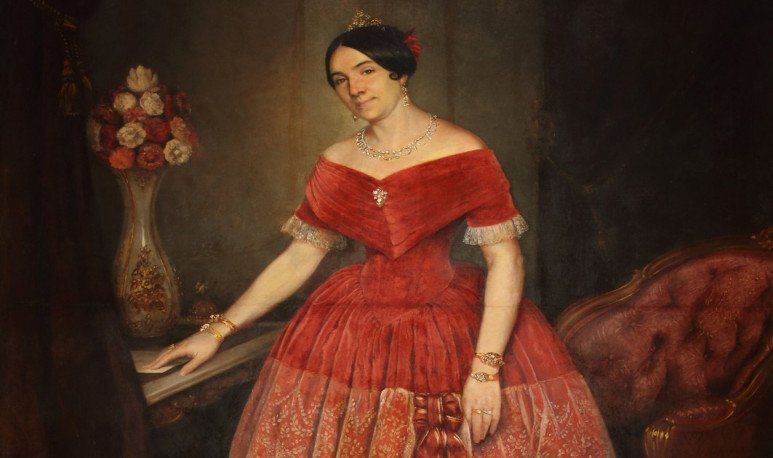 “ Un alto en el campo” is the head of a long series of paintings of rural customs in Argentine art, which goes into the nineteenth century, whose purpose has been to warn that the modern nation possesses in the rural world the reservoir of an imagined Argentine identity.” Roberto Amigo in the  Razoned Catalogue of the National Museum of Fine Arts.   Buenos Aires: Clarin. 2010. 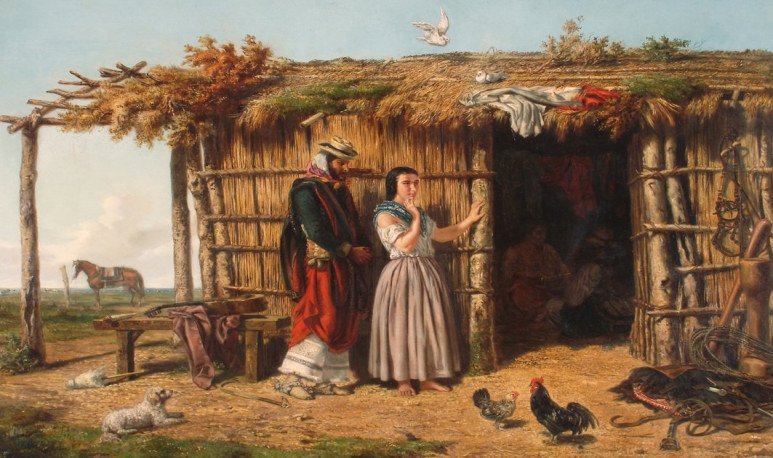 “I believe that Pueyrredón's importance in 19th century Argentine   painting is due to the — gravitation exercised on it vital elements of the environment in which they acted, to the reflection of a life that made sense. A reality that gravitated at all times on those who lived it, on the natives and on those who came from outside... in their work, sometimes rudimentary this fusion of subject, form and content is realized, that unity of style between perceiving, thinking and expressing that gives prestige to human creations. His work matters an entire participation of the individual with the subject... did not create a tradition or an aesthetic... within its limitation he found the formula that would identify them, to him and his representations, as testimonies of an era with its own will” Julio Rinaldini in Sur magazine, year 6 nro 22, July 1936. Buenos Aires (in Rinaldini, J.  Writings about art, culture and politics.  Buenos Aires: Espigas Foundation. 2007)