The writer broke the mold with his absolutely original and unique novels, revulsive of the canons. So much that you can talk about Puig, but you can't write like Puig.. 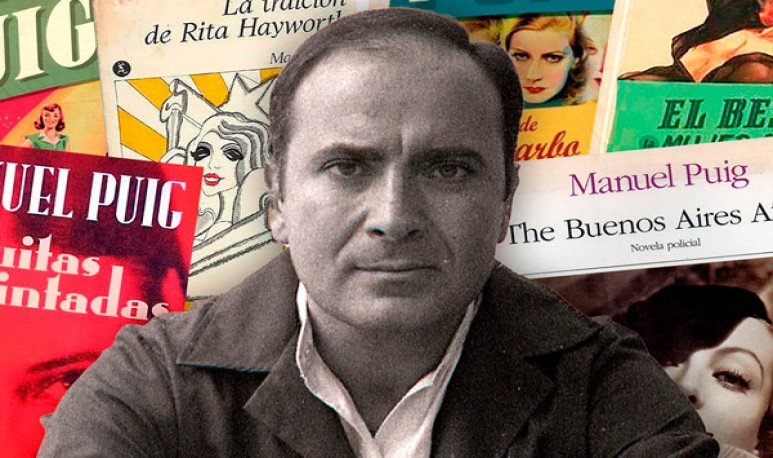 Manuel Puig ( General Villegas , Buenos Aires province, 1932- Cuernavaca, Mexico, 1990) is another beginning of Argentine lyrics, less prejudiced, less literary, more vivid . Unanchored from literary references, Puig proceeds to intervene in mass culture, cinema, media and idiosyncrasy, with a parodic look, not without tenderness and romanticism. Its protagonists, relatives of the Hollywood heroines of the forties sifted in the dispute of the gender issue, and the sexualities of the seventies,  may seem superficial but precisely Puig's novelty is to reveal that there are hidden the deepest depths of who we are.  The writer accommodates us in a village cinema with Toto and Berto in “The Betrayal of Rita Hayworth” (1968), or a sordid Argentine prison with Valentín and Molina in “The kiss of the spider woman” (1976), and runs the curtain of sensations and feelings that identify us. Puig takes discursive genres to the edge and shows the seams of domination policies. All with a tropical smile that never decays.

With a village childhood, and with a world occupied by cinema from Monday to Monday, Manuel Puig began his heterogeneous training in Philosophy and Letters, and attends the classes of Jorge Luis Borges, who would then be one of his first detractors. Earn early a scholarship for perfecting scripts in Rome, a self-taught polyglot, and works in an area company, with residences in Rome and Stockholm. Simultaneously performs some assistance work in the European and Argentine film world. There he wrote his first scripts, including “La tajada” (1960), which was only known in 1998. In a stay in Rome in 1962 he began to work on autobiographical patches, supposedly mid with the teenage loves of a cousin, in order to new script. There was the genesis of “The Betrayal of Rita Hayworth” (1968), “suddenly,” says Puig, “I could hear the voice of an aunt very clearly, what he said twenty years ago, and I transcribed it. My aunt's, who had to occupy one, occupied twenty-five, written almost without thinking, as dictated”, in a novel technique that César Aira calls “presentation of history” that is to silence the omnipresent narrator of a novel and “to make the way of speaking emerge, by defective or limited that is, of the characters,” Puig ended. An unpublished tool that unmasks, and nullifies the vices of writers, someone who was little interested in rules, of any kind . His disputes at the Homosexual Liberation Front, Puig one of its founders in 1971, are memorable to expand the struggle towards other minorities and not become  ghetto  as his companions intended.

In the talk about the characters of Puig hides a fate, often tremebundo .  Everyone has a voice . The inaugural novel consists of sixteen chapters, eleven are direct transcripts of interior dialogues and monologues, and five previous texts, such as an intimate diary or school composition. Puig builds a polyphony of subjectivities, carnivalesque, that confronts without any narrator who quietly the waters. In the explicitation of fantasies, hypocrisies and alienations (in which the film device projects into the cave) the fate of the protagonist “Rita Hayworth's Betrayal” arises magical and terrifying. This novel “prodigious” by an unknown author was about to win the prestigious Seix Barral Award, which he lost by only two votes, one of them by  Mario Vargas Llosa, “I'm not going to reward an Argentine who writes as Corín Tellado,” said the Peruvian writer . This perhaps motivated Puig to look for an Argentinean editor, South American. Bad time. Just assumed coup president Onganía in 1966, strong censorship put the books at the will of military officials and if they considered them “pornographic” the author, publisher, printing press and owner of the bookstore were imprisoned. A linotypist surely read the conversation between Toto and Pocha about the meaning of “catch” and immediately stopped the impression. A couple of years later Jorge Álvarez's editorial, an architect of Argentine counterculture, would edit “The Betrayal of Rita Hayworth” It was an incredible immediate  bestseller  among  snob  readers, who inflated the boom of Latin American literature, and others, those few affections to reading, and with morbid, in the midst of a society that restricted freedoms.

“Boquitas pintadas” (1969), which had a film version with Alfredo Alcón, and “The Buenos Aires Affair” (1973) exacerbate the sexual theme in love or police plots; at the same time they perfect Puig's method of cutting and pasting, so in vogue in postmodern literature of the end of the century XX.

The political climate, and the real threats of the parapolicial Triple A, force Puig to migrate to Mexico, New York and finally Rio de Janeiro. I would never return to Argentina again. He spends a couple of years interviewing political prisoners for his next novel, although Puig considered his books rather sophisticated comedies, or dramas, to the cinematic way. The appearance of “The kiss of the spider woman” (1976) marks a new turning point of his name in the world, and transforms into his most famous creation with versions in theater, film and musical comedy. A kind of learning novel, or unlearning of mandates and social assumptions, the love relationship between Valentín and Molina acquires a fluency that changes the perspective of how to understand a dark period of continental history. On a human level, without epics. And all illuminated in old Nazi films and horror films class B, “Great levelador, Puig falls in love with cults for the way it is located from one culture to the other, erasing the effort of the passage from bolero to folletín, from cinema to novel,” says reticent Beatriz Sarlo.

A sinner among sinners

Male, sexist and patriarchal violence against children in “The Betrayal of Rita Hayworth” or homosexuals in “The Kiss of the Spider Woman”, takes the center of the scene, now against women, in “Angelic Pubis” (1979).  Ana is exploited successively by a wealthy husband, by a repressed repressor (sic) and by a militant of the Peronist left, who goes further than the others “Puig is not separated solely from the discourses of the state and the mass media, which is the least we expect from literature: it opens from the literature itself, as long as it tries to constitute itself as a discourse of power and truth”, remarks Carlos Gamerro, one of the many essayists such as Aira,  Ricardo Piglia,  Josefina Ludmer or Graciela Speranza who they reveal the originality of the Buenos Aires writer since the 1980s although Argentine criticism, and the big media, ignores it. Not only criticism: the Argentine ambassador to Mexico did not know who he was when he died in Cuernavaca.

“Eternal curse to those who read these pages” (1981), laconic and tragic to the end, “Blood of reciprocated love” (1982), shocking story of a filial love in Rio de Janeiro, and the last “Tropical Night Falls” (1989), a final journey to gossip as the work of art, close the novelistic project of Puig.  After his death in Mexico, articles were known, many in Italian and English, and his dramaturgy, “Bajo un manto de estrellas” and “Triste swallow macho” was spread among the main, and which includes a musical comedy about  Carlos Gardel.  There were several unspecified scripts, and lectures, of a writer listed in the main capitals.

“I don't have literary models because I haven't had great literary influences in my life. That place has been occupied by cinema,” Manuel Puig clarified in 1979, and later rivet before the fear of serious critics, “I'm sorry, but I don't know much about literature.” And yet he left lines of style that transcended paper, and that remain contemporary,”Valentín: When you leave here, you're going to be free, you're going to meet people, if you want you're going to be able to enter a political party... Molina: You're crazy, they won't have confidence for me for pusto”  From Manuel Puig's betrayal to Argentine literature, from its irreducibility, a little next to Roberto Arlt and Osvaldo Lamborghini, born a literature of the “bad taste” -Borges dixit- which is much more than literature, is an authentic Comedy of Life that never comes down from the poster.

“I am convinced that sexism is a more serious problem than economic and labor determinations. The school of exploitation is in the man-woman relationship” in Torres Fierro, D. “ Conversation with Manuel Puig: the redemption of the cursilería”  in Eco magazine No. 173, March 1973

They say about Manuel Puig

“With his novel “The betrayal of Rita Hayworth”  Manuel Puig  appeared on the horizon of the Argentine narrative establishing a bridge, apparently simple, between orality and writing. However, simplicity was misleading and proof of refined art, as well as a far-reaching project that rested on precise and highly critical observation of languages, customs, conflicts and ideologies. Given these elements, the project could be a sort of “Humana Comedy” but in which realism was very  quested because, the whole work proved it,  it was about transcending the abasalladores referent and make the stories natural flows, apparently spontaneous and simple” in Jitrik, N.  Historical panorama of Argentine literature.  Buenos Aires: Editorial El Ateneo. 2009