Homero Manzi gave wings to tango poetry. And he stamped the landscape of Buenos Aires forever. 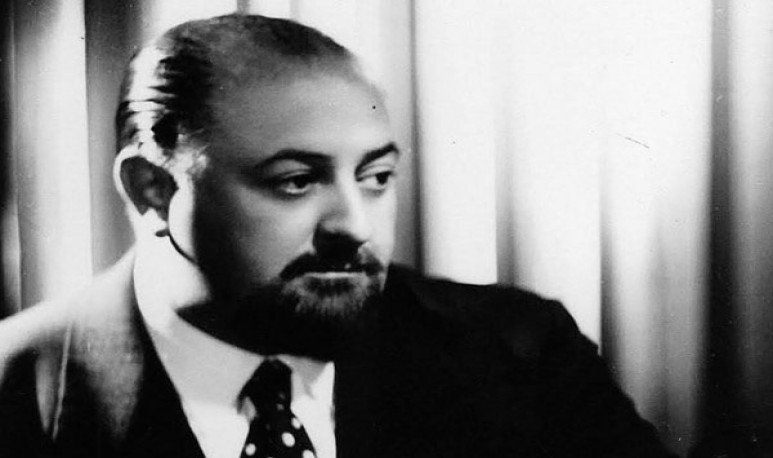 Homer Manzi  (Homero Manzione. Añatuya, Santiago del Estero; 1907 — Buenos Aires; 1951) is one of the  greatest Argentine poets of the 20th century  without ever having published a book of poems. All his lyrical work,  immensely popular,  is accompanied musically by tango giants such as  Hannibal Troilo , in a golden duo during the forties with “South” (1948) or “Che Bandonéon” (1949), or Lucio Demare, “Malena” (1941). Influenced by the Criolism of  Carriego,   Borges and Gonzalez Tuñón,  although very original in raising the popular language without lunfardas affections, and false romanticisms, Manzi makes nostalgia the homeland that defines until today as a porteño.

Born in Añatuya, a “miserable villorio” in his words, as a child he moves with mother and siblings to Buenos Aires, a few years to Boedo, and then definitely, to Pompeii, avenue Garay 3259 “How many times did my childhood come back from the mand/stood at the door of a herreria/ to sahumarse in 1928  Manzi  recalled in these verses that “end of the world, the pampa in the neighborhood” and that were the neighborhoods of the South. And the key of his later work is the melancholic look on a past of riverside streets, porches and lanterns, and a dreamy mention of the lighting action of the “forge”, one that would be the acronym of the radical left-wing group that would be founded in the following decade with  Raúl Scalabrini Ortiz (1898-1959) and Arturo Jauretche (1901-1974).

Imprisoned and expelled from his literature professors in secondary schools by the repressive governments of the Infamous Decade,  Manzi  began to focus on journalism and the literature of tango, approached by playwright  José Gonzalez Castillo (1885-1937)  , to earn a living. He befriends  Sebastián Piana (1903-1994),  both fundamental in the resurgence of the milonga, of countryside origin. “Milonga sentimental” (1933) was recorded by  Carlos Gardel  with resounding success. The following year he founded  Microphone, then Radiolandia , one of the flagship publications  of the  Argentine radio boom.    He criticized in his columns a simplified version of the humble man, whether rural or urban, “the Argentine man has a corner where he sheltered the poetry daughter of love and nostalgia” also a film career, screenwriter, director and composer, based on his knowledge of national history and sharp observations of reality, which expands on the creation of the production company Artistas Argentinos Asociados (1942) That same year, his adaptation of the novel by  Leopoldo Lugones, “The Gaucho War”,  in the company of another great creative duo of his, now with Ulyses Petit de Murat   (1907-1983)

“He was a remarkable repetist, with a great poetic ease,” Petit de Murat recalled, and he admitted, “I was always surprised that he could write a tango in a few minutes, at a halt in filming, or while we had a coffee. But he was never able to produce a solid work” distilled the writer who moved away from  Manzi  due to the poet's adherence to Peronism.  Manzi  's not-so-linear relationship with the popular movement born on  17 October 1945  followed with radicalism in the Democratic Unionand faced the Labour Party in the 1946 elections. In addition, from the presidency of SADAIC -Argentine Society of Authors and Composers - he publicly claimed to  President Perón for censorship against authors and artists. However, some of his last lyrics were the “Milonga a Perón” and the “Milonga a Evita”. He died at the age of 43 to the pain of a Buenos Aires whom he had forged in verses “to sing for not crying”, kicking through its cobblestones, smelling its jasmines, in love with its women, and who had founded mythically in San Juan and Boedo.

If Carlos Gardel is the eternal president of the Republic of Tango, Manzi is its poet prime minister.

“The bandoneon is a soul that took the form of a worm by the force of crawling behind an impossible love. When he was about to die of grief in a forgotten corner of the world, the caresses of the Creole hands helped him suffer his distress. To the man of his lonely sorrow, tango gave him the bread of a right and companion friendship. The suburb got him drunk in his glasses to do it” Archive of Acho Manzi. Quoted in Salas, H.  Homero Manzi and his time . Buenos Aires: Vergara. 2001.

They say about Homero Manzi

“Manzi was born a poet. He was a poet and a good man, since childhood: long before -Federico- García Lorca was known, the same genre of lyricism and the same quality championed the verses of that neighborhood boy. I was in the conscription Manzi, when one day he said to me: “I have two ways ahead of me: to become a man of lyrics or to make lyrics for men.” And so he sacrificed glory, to give his talent to a humble work, turned into a lyricist of songs. He fulfilled that task, as did Enrique Santos-Discépolo, assuming the duty of ranking the art of his people. And he did this consciously, sacrificed, throwing out the window the glory that dazzles those who seek literary consecration.” In Jauretche, A.  The Prophets of Hate.  Buenos Aires: Trafac. 1957.