Home People Art and Literature García Ferré: the great illusionist who was a master of life

The Spanish cartoonist, animator and editor, a lover of Buenos Aires, projects values to six generations. It will continue. 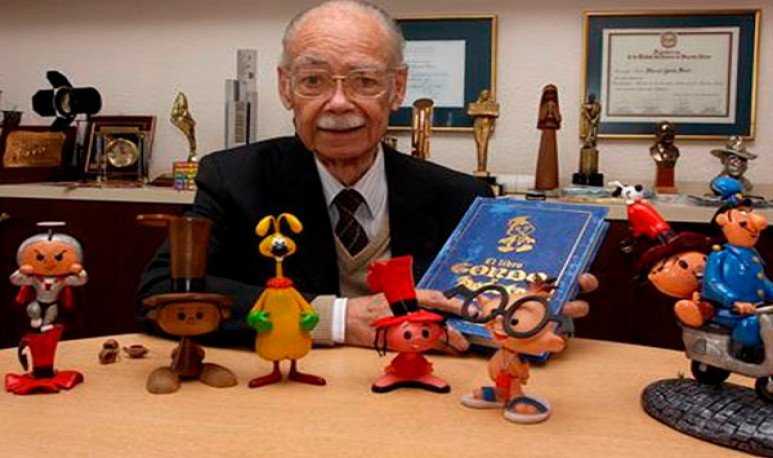 Manuel García Ferré  (Almería, 1929-Buenos Aires, 2013) is one of the main  graphic comedians , and editorial entrepreneurs in the Argentine environment, with a desire to educate, and who still is remembered in Latin America with its characters.  Eyeojitus, Hijitus, Petete, Trapito, Manuelite  and dozens more on paper, or celluloid, represented a harmonious world, without conflicts, where the most bad guys could redeem themselves.

Arrived in the country in 1947 with the dream of being an architect, who left as a witness an inspiring painting of his suburb in his home for decades, his beginnings are in advertising. But his great love was film and animation, admirer of Chaplin and Disney, and he launched to her with “I am happy”, a short film starring a linyera chick named  Pi-Pio , and with the background of a hit of the moment, “Linyera soy”. That same year he got a job in  Billiken  making the  cartoon  version of the chick and takes to his stage of Villa Leoncia, already as a bizarre sheriff, to a limit of delusions that anticipates contemporary animation. And while it has the moral and didactic bases of the entire work of  García Ferré , “I will never promise what I cannot fulfill,” says  Pi-Pio , idiomatic and stylistic freedoms appear that will stimulate the imagination of new litters of cartoonists. Also emerge in this strip  Calcutín, Ico, Pinchapúa -Pantriste-, Oaky -evil version- and Hijitus , “imported boy in observation that descends from the pharaohs” All of them will pass from  Billiken to  García Ferré's own magazine, Eyeojito  (1964-2001), which takes the name of the famous character who along with his  uncle Masfaz  starred in his own television program on  Canal 9  . Both were born from  García Ferré Producciones  in 1962, one of the successful advertising producers of the decade, inventor of comic jingles, with more than 800 animated commercials for major brands, and winning the   Martin Fierro   in 1964.

The weekly print run of  Anteojito  reached 700,000 copies with content attached to the school curriculum and endearing comics by  Lino Palacio, Fola, Mirco Repetto, Jorge de los Ríos and Oswal  , among many collaborators. In that context  García Ferré  achieved new records in 1967 with the  first Argentine animated series, The Adventures of Hijitus.  From there   Largirucho, Pucho , Professor Neurus, La Bruja Cachavacha  ,  Boxitracio  , to name just a few, become part of the popular imaginary of Argentineans and Latin Americans “Bla louder que i don't listen to you”, “Shut up, retonto” or “Este que que, teacher” are stainless cords of the series that are transmitted from parents to children. And that films from “Thousand Attempts and an Invention” (1972) to “Soledad y Largirucho” (2012), through the box office “Manuelita” (1999), transformed into an inexhaustible source of smiles based on goodness, courage in the face of injustices, never stop dreaming, and value work and the family.

An illustrious citizen of Buenos Aires in 2009, and distinguished by the Kónex Foundation due to his task in the dissemination of culture and science, through magazines and programs,  García Ferré is more than the Argentine Walt Disney , is a luminous teacher of our girls and children.Intringulis-Chingulis forever! Uh! Uh! Uh!

Clarification to the unsuspecting reader: this phrase by  Anteojito , which headed the eponymous magazine, also had the typical finishes of  García Ferré in pseudo Latin, a kind rematch to the classical language that had made the child suffer Manuel in his native Spain.

“I hope that - my legacy - will help show that with heart you can many things, many things. That it doesn't matter the batons. It matters affection, believing, counting. And that's what I've chosen to believe in this life. In me there is a Quixote in the form of a  Hijitus , and sometimes I reveal myself against windmills.” (Source : www.profil.com ).

They say about Manuel García Ferré

“He watched a lot (just like  Eyeojito ) and everything went to the bottomless galley of his characters. He listened to everything carefully, attentive to the smallest detail and his comments always brief, left us thinking... -with him- it was like walking with a boy. Because he never forgot to be a child. He walked fast and without rush because for him the important thing was the trip” Horacio de Dios in  García Ferré . Catalogue. Museum of Humor. 2013