Home People Art and Literature Emilio Pettoruti: the painter in front of his mirror

Great provocateur of the twenties, and official authority in the forties, Pettoruti embodies a modern art project suitable for all public. 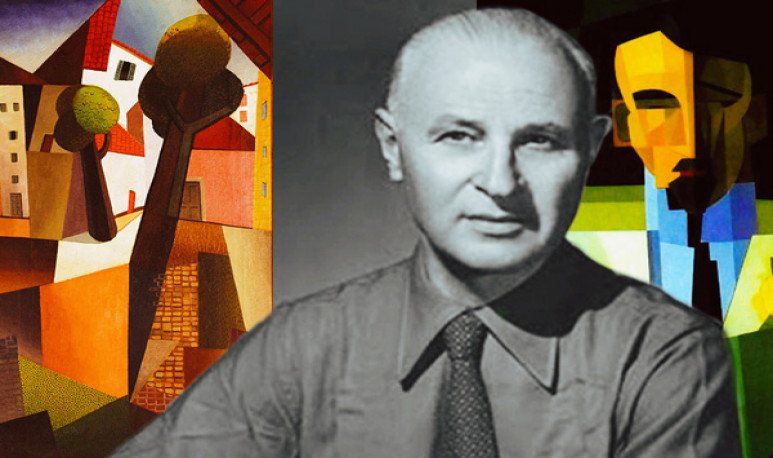 Emilio Pettoruti  (1892-1971) represents the tensions of an Argentine art  enrolled in the international avant-garde and its readings and paths in the local context.Modernity and tradition find in their geometric harlequins, birds, suns or cups, in a metaphysical environment, an order, a harmony, a hierarchy, which rests serenely in a world without anguish.

With almost self-taught training, only a few classes with master Atilio Boveri and architect Emilio Coutaret, son of a large immigrant family,  Pettoruti  begins to work by performing cartoons in the press of his native La Plata. In 1911 he exhibited his humorous vignettes in the platense newspaper “Buenos Aires”, and deputy Rodolfo Sarrat, who had been one of his models, gets the support for a scholarship trip to Europe. Ten years in the Old Continent revulsive initially under the impact of futurism, “it was for me a huge shock - the Futuristic  Lacerba  Exhibition in 1913-, think that it came from La Plata, a city where the moonlight reigned, the Colombian writer José María- Vargas Vila, and that was the first time in my life that I saw avant-garde works” Meet futurist leader Marinetti in person and is deeply disappointed by his anti-traditionalist radicality, “because painting was and remains construction and color,” he notes premonitorily. At the same time he became friends with  Xul Solar , the other major disruptor of  Argentine art from the first decades of the 20th century, and began his approach to  Juan Gris's cubism.

Pettoruti  returns to Buenos Aires with an exhibition at the Witcomb Gallery, where he presented eighty-six works including paintings, drawings, mosaics, designs and set designs for puppet theatre. And on  October 13, 1924, Argentine contemporary art began  with its futuroubism that threw hammering naturalism, impressionist features, and picturesque regionalism, those that reigned peaceful in salons and museums. Some said their work was an “offense to the dignity of the country.” Others, the  martinfierristas boys of  Jorge Luis Borges  and Xul , greeted bullangeros the renovation of national plastic. Immediately  Natalio Botana , the ineffable editor of  Criticítica , calls the painter to the old editorial office of Sarmiento Street, and extends a blank check, “  Criticism , as you know, is a newspaper read all over the world, well,  Criticism is write as much as you want and how you want,” giving the big and massive door to the cultural modernization that the villager and prejudiced Buenos Aires cried for with her cosmopolitan destiny.

The artist not only spread avant-garde trends in the newspapers,  La Prensa  was also his trench, but also encouraged the most risky intellectuals and architects as  Oliverio Girondo  and  Alberto Prebisch  , and held an unknown renewal program in the broadcasts artistic last minute.  Pettoruti  was at the top modernizing point with the seventeen year direction of the  Provincial Museum of Fine Arts in La Plata  , which guided contemporary Latin American art, and artistic teaching in non-formal and free spaces such as”Altamira. School of Fine Arts”.

However in the forties his official voice, and his painting, increasingly tends to revise the same modernity.  Pettoruti , a lover of the perfectionism of the Italian Quatroccent, is pronounced in Rosario for “a work of art that brings together as an essential condition geometric, clarity, analysis, and above all, order, qualities that true artists make their own”, finished in 1939 when the new realisms of an  Antonio Berni  questioned the imperishable value of art with new strokes, now linked to a novel political-social problem. Such a problematic that he was going to hit full against  Pettoruti  himself when he was labeled by a Peronist minister as “a degenerate painter” in a late 1948.

In 1952  Pettoruti  settled in Europe, disenchanted and repudiated by new generations of artists who himself had helped to incorporate modernizing Argentine culture. He regularly exhibits in Milan, Rome and Paris until he decided to return to the country in 1970. He died in the previous days in a lonely bed in a Parisian hospital. His works are located in the Eduardo Sívori Museum of Fine Arts, Museo Nacional de Bellas Artes, Provincial Museum of Fine Arts of La Plata, MOMA in New York, National Museum of Fine Arts of Chile, and several private collections around the world.

“Every epoch has its imperatives, and the most acute of our times is the one that has the conquest of a social parity that eliminates the injustices endured by the majority to benefit a minority... -the mission of art is to invite us - to meditation at the same time elevating ourselves towards spheres in which our soul feels the shaking of a healthy and vibrant reaction... -so - La Gioconda fulfills a social mission” in  9 Arts , Bs As nro. 1 November 1947, quote from  Serviddio, L. in  V Jornadas Estudios e Investigaciones. Julio Payró Institute.  FFyL. UBA. 2002

They say about Emilio Pettoruti

“A well-defined trend towards the simplicity of expressive media, clear and solid architecture, towards pure plastic that preserves and accentuates the abstract significance of lines, mass, color, all within a freedom of understanding and composition”  Xul Solar  in  Martín Fierro magazine, second epoch , Year 1 No. 10-11, 1924