Home People Art and Literature Carlos Alonso: the cattle and the lost

The visual poetics of Mendoza is the memory of a wounded country called Argentina. Critical imagination that returns and returns to spit the national asado. 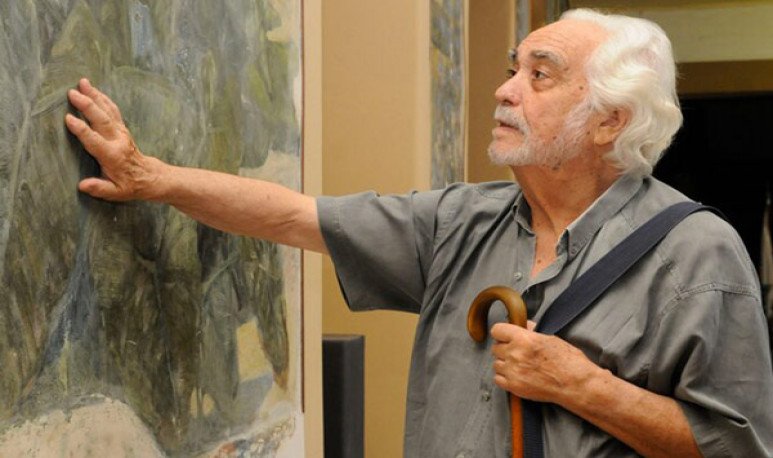 Carlos Alonso (Tunuyán, Mendoza, 1929) is an Argentine painter, muralist, cartoonist and engraver who descended to Latin American hells with his acrylics, drew bandages to the geniuses of the arts with his pencils, and composed collage and murals that are living flesh of the history of the villages.   His themes are universal and Argentine at the same time, violence, the victims of all ages, ideologies, sexuality and hegemonic representations, “once the subject is within me - argued the artist to Tomás Eloy Martínez in 1974 - I deal with delay in it, to go depositing the multitude of sensations that assault me while I paint. I know that the time I stay working on the painting is what the viewer needs to discover everything I put in it. Yeah, it's true.  Looks like painting he was writing a novel.”

Son of a customs broker and a housewife, he leaves secondary school and enters the Academy of Fine Arts at the University of Cuyo, where he has lecturers Sergio Sergi, Ramón Gómez Cornet and Victor Delhez. Several of them accompanies Tucumán when they came into conflict with the Peronist authorities in 1949, he also looked with evil eyes for his communist militancy  “He was my teacher, but more personally than pictorial — he remarked the figure of  Spilimbergo , who he met in 1951 at the Tucumana university, and of whom he would devote moving portraits while he was his neighbor in Cordoba-  Fundamentally, he was a free man: free from conventions commercial, speculation, success, fortune and fashion;  his freedom was full of rigor ,” said Alonso, who also receives the influence of Lajos Szalay in drawing, and learns to dynamite strokes in innovative methods.  Early on he faces the dehumanization of men in the contemporary world, in a realism-expressionism not without irony.   He exhibited in 1953 in Buenos Aires, “Alonso feels deeply the humble and dramatic themes... penetrates the orbit of art with alert senses”, would be his first criticism, and he gets a scholarship for Europe that impacts the young painter with the great artists, especially two whom would return again and again on triggers and quotes,  van Gogh, “through it we learned (rediscovered) painting as a force that puts clarity in our life” and Rembrandt, “the subject of this Dutch painter is flesh... the same movement as cities: its flowering and its decadence”

In Italy he incorporates the engraving, which will work in his own workshop on his return in Esmeralda and Paraguay, and alternating with endless gatherings in the bars Moderno and Floridita, which unsuspected cross it with the artists of the  Manzana Loca di Tella  (Alonso did not agree with the “death of easel painting” said by Jorge Romero Brest, the pope of the artistic move of the sixties, but admired close painters such as Ró mulo Macció and Ernesto Deira).  In the sixties Alonso developed a fractured and discontinuous perspective exploited in “Blanco y Negro” (1963), a group on fears and childhood memories, “Carlos Alonso's painting makes us uneasy,” said David Viñas.  And that in 1965 has a testimonial twist with Esteban Echeverría's drawings on “El Matadero”, full of metaphors about flesh, power and violence “ The concern for the constants of violence that envelop Argentine history is in me a visceral feeling”  Alonso admitted that at the end of that decade he suffered for the first time censorship for the works of the “ Lesson de Anatomy”, a daring reinterpretation of Rembrandt's famous work with the characters, and political contexts, who intervened in the murder of Che Guevara in Bolivia. All in pop and neo-expressionist key .  Painting as an ethical tool in the face of history and, which contributes to the construction of a revolutionary historical meaning, will be a constant of his work;  in anticipation of his adherence to the Italian New Realism - and which was fundamentally a politicized but not pamphletarian art. Alonso had already advanced these guidelines in the famous group exhibitions at the SAAP - Argentine Society of Plastic Artists- against the repression in Tucumán for  dictatorship of Ongania , or US imperialism.

“I also learned a lot with the illustration; she was always at the center of my workshop, she was never the poor little sister. I illustrated thirty books . It allowed me a very close contact with the poets: Dante, Lorca, Neruda, Maupassant...” enumerated Alonso, who began his graphic work with El Quixote (1957) and who has jewels in his versions of Martín Fierro (1959), “The rabid toy” of  Roberto Arlt  (1967), and La Divina Comedia (1969), all where the artist “continues to fulfill the critical and answering character that goes through the totality of the work,” said the critic Raúl Santana, “When you enter those poets, you don't come out indending me. Some I illustrated them in watercolor, others with monocopy or  collage . I really liked to search and find the material that supported those texts. Those techniques were experiences that remained in my workshop, which became definitive. In addition, the illustration gave me the economic independence I needed to make the painting I wanted.”  With Alonso, it is not known who illustrates whom.

“ I had broken the world”

“ The show “Cattle and the Lost”, which somehow announces all the rest, was before the Process. It was not a premonition, the signs were there -Isabel Perón and the military, the Triple A-, only many did not want to see them and looked the other way. Trelew's Masacre had already happened.   These are things that do not go unnoticed even if they pass quietly. At the time I didn't plan to sell those works, I did it for me. No one wanted to buy them anyway,” Alonso told the curators of the exhibition “Painting and memory” at the Museo Nacional de Bellas Artes in 2019, one of the busiest in the millennium. This was a series that had been working since 1971 and that was exhibited at Art Gallery, along with another etchings and silkscreen prints “Mal de amores”, a few months before the 1976 coup “A power -over the bodies - that has been exorbitated and does not limit its transgressions, considers and treats the human body as if it were a cow... it was therefore a question of pulling that little rope so that the sinister skein appeared that we later saw in its true dimension” pointed out in the distance the painter, who had to go into exile in Rome and Madrid with his wife and son, and who felt the real and bloody scale of State Terrorism in her own flesh: her daughter Paloma has been detained and disappeared since 1977.

“Anonymous hands” was the series that started in Europe, similar the title of the 1976 aborted installation at the Museum of Fine Arts (military, cattle and mutilated bodies that were recreated in 2019), and expressed the infinite wound of the artist, irony merges with a painful reality, and women and children suffer from horror.  The horror. There are no more spaces for sarcastic metaphors in the artist's performances “I had broken the world”  recalled his return to the country in 1981, and the unsuccessful search for his kidnapped child in San Telmo. Return to Unquillo's house in Córdoba, Alonso's home since 1982. There he begins to paint landscapes, “a way of being able to elaborate grief... I wanted to recompose my own memory... it was necessary to find beauty and power within”, closed the artist, a central figure in museums and biennials of the world, persecuted in his homeland.

Peripheral figure of the world of national art, “working making a painting that irretrievably becomes merchandise is intolerable,” emphasized Alonso in 1969, the last decades transformed him into a canonized artist of museums and galleries, with anthologics and retrospectives that were alternate with new productions, “El painter caminante” (1990) or “Be eternal brushes” (2015) with Guillermo Roux, and murals, including “With your feet on earth” (1993) for the lunetos of the dome of the Pacific Galleries, or “La Inauguración” (2004), in the C& aacute; Senators from the Province of Buenos Aires. Recently he distinguished the artist with the Prize for the Trajectory of the National Salon “ Pinto,” said Alonso in the two thousand, an artist who shuns easy flattery and magazine covers - I live and try to face the crisis by painting.   There's no other way to solve them. They once asked Picasso what he would be locked in a cell and without materials to work. He replied with a very beautiful phrase to which I totally adhere, because he expresses the conviction that you can always try something: “ I would draw with my wet tongue on the dry floor””

“Between the people and the streets of my village/and I discover that I come back hallucinate/because this is the exact space that me/corresponds” in the words of the poet Hamlet Lima Quintana who illustrated Alonso in 1989, as he had before with his great friend, another great poet, Armando Tejada Gómez. In the streets of your village, we'll find you, Pintor.

“There were habits that were completely lost or reduced to the maximum, especially in cities like Buenos Aires: the meeting in bars, the fascination of dialogue, fraternity relations between people, solidarity gestures. The dictatorship was raised as a project to transform society and it succeeded. He went from that romantic mentality, which was able to give life to achieve a fairer society, to speculation with the dollar table, where even housewives followed the quotation of the American currency. It was a hurricane that ravaged that culture, which I don't know if it will recover but which is indispensable to life. In Argentina this beginning of the century, hurricane is the economic plan. He's not leaving anything on his feet. And people live the situation as a catastrophe... in that circumstance it becomes difficult to concentrate on work. For those who have it, because there are hundreds of thousands of unemployed. When you have to think all the time about the situation in the country, creative energy is withdrawn. It's like being stuck in the immediate and not being able to sneak away from it” in  Puertas Interabertas. Talks with twelve great Argentine artists . Buenos Aires: IMFC editions. 2009

They say about Carlos Alonso

“You have a much firmer line. It responds to an internal impulse, which does not give it to you by anyone, nature gives it to you. A precision in what you mean is unappealable. The sign of yours. That's what you have so extraordinary. It looks in your painting. You draw like a boy... in tune with your thought”  Talk with Guillermo Roux, collected by Maria Paula Zacharías. Ro Art Gallery.   2014.