Home People Art and Literature An ark full of our art

“Yuyo” Noah defines himself as an artist who understands himself with chaos, with everything that is part of life itself. We tell you about his life and work. 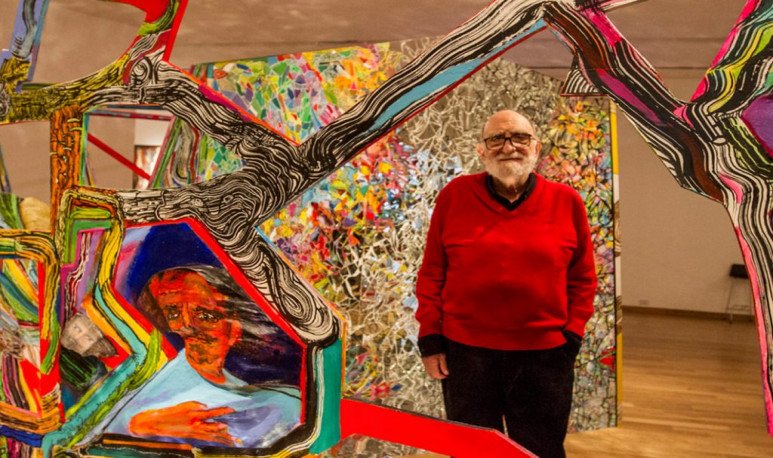 Luis Felipe “Yuyo” Noé (Buenos Aires, 1933) as  an artist  and theorist meant the renewal of  Argentine art  from the middle of the last century, either with his participation in the influential group of La Nueva Figuración (Ernesto Deira, Romulo Macció ;, Jorge de la Vega and Noé), or with the persistent work and writings behind an  aesthetic  that questions both the ideological system and the art circuit itself, from  museums  to critics and spectators.

In the heat of the informalisms of the 1950s, he began an artistic search that in 1961 was revealed in the  Federal Series , a risky re-reading of the nineteenth century Argentine civil wars. Those years of learning, in the country and other capitals of the world, culminates in a first stage with “Noah + collective experience” at the Museum of Modern Art under the famous phrase “I believe in  chaos  as a structure”.

After years of distance, he returns to the mid-seventies  painting  with “Conquests and destruction of nature”. Exiled in France after the military coup, he recently rejoined in 1987 after a historic exhibition at the San Pablo Biennale. He has made more than 70 solo exhibitions in Argentina, Europe and North America, being an artist to whom the  Museo Nacional de Bellas Artes  has dedicated several solo exhibitions: the first Argentine Museum has the seminal “Introduction to hope” (1963).

His works are also found in the public museums of the City of Buenos Aires, “So We Go” (1997), First Prize Salon Manuel Belgrano, Sívori Museum; and “Institutional Establishment” (1994), Museum of Modern Art, among others; which are added to various national museums, international and private collections. Among the awards obtained is the Grand Prix of Honor of the National Fund for the Arts of Argentina (1997). “Chaos does not exist, what happens is that we call chaos something that we lack modules to understand it,” says one of the living masters of several generations of Argentine artists.

“ To say, as they say today, that art has died is to affirm that we are dead in our dimension of being the soundboard of those around us. Now that they talk about the fact that art died is when we need most in its active exercise... the emergence of technology not only does not exclude them - artists - but challenges them to catch today's world, understand the networked world, that is, to overcome the monocular vision, not only in the landscape, but also, with respect to the culture that surrounds us.”

They say about Noah

“ Introduction to hope” is an emblematic example of the term chaos as Noah's conceptual objective. In increasing gestures, the division of the painting grew with the aggregation and opposition of structures towards multiple and diverse combinations... the primal unity of the painting was to be broken by opposition or tension, and this is what achieved the work that won the National Painting Prize of the Instituto Torcuato Di Tella in 1963”.