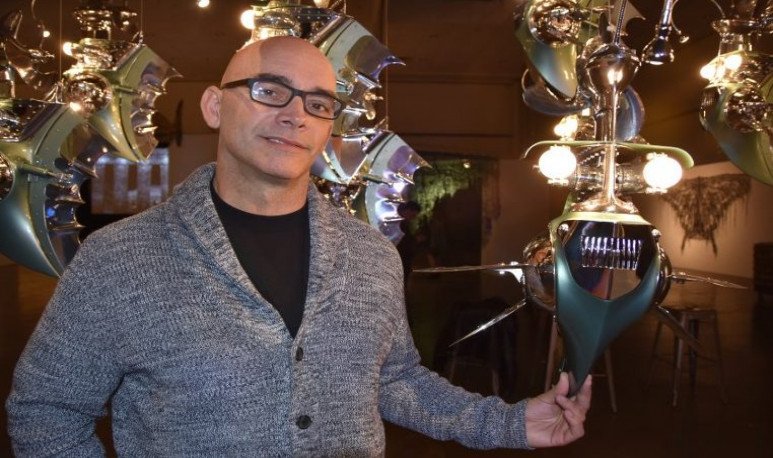 The Argentinian artist Cristian Castro is currently exhibiting at the LA Art Show in Los Angeles a series of works where he recovers the brightness and mobility of ravaged scrap metal and turns it into huge robots and other metal characters that often light up art rooms in the United States.
The artist recreates nature beings, such as this collection of 27 flashlight fish made with reused mechanical and electrical engineering pieces currently on display at the LA Art Show in Los Angeles.
“ I started doing this kind of art from a very young age, disassembling appliances, motors, old radios and started generating this kind of art around recycled pieces,” he stressed in an interview with Efe.
Thanks to his industrial design skills, he got a job in a “prototype” vehicle and electric collective factory in Downey, California, after arriving in the United States in 1999 with his wife and a son “in search of the American dream”.
There he learned engineering techniques to build pieces that he applied to his artistic works, which he has exhibited in exhibitions dedicated to technology and science.
Thus were born, among sparks of autogenous welding, seven abyssal fish and a huge crab, whose shell is the engine cap of a red beetle, which he exhibited in 2018 at the Museum of Latin American Art in Long Beach (MOLAA).
The passion for disassembling ruined toys and appliances of his childhood, which sparked his creativity, is now added to that of recycling industrial waste.
“ My message is to make people aware of the amount of garbage, radiation, everything we are putting to the environment,” said the 47 year old Buenos Aires.
“ The idea is to recycle,” so that industrial or electronic waste “does not go to our environment and pollute more,” said Castro.
His goal, he explains, is that any device, after its lifespan, “be used in some way and at the same time collaborate in the creativity or development of a child's mind.”
About his hanging collection of lantern fish (Centrophryne spinulosa) recalled that he visualized these creatures from the sea abysses in an outboard engine of the fifties and sixties on one of his visits to the “flea markets” of the internet.
“ I use that piece for the design, it has a retro style, it is totally metallic and around that piece what I did was generate the body of the fish in fiberglass,” said Castro.
The artist, who earns a living as an independent contractor of industrial design, stressed that due to the garbage emanating from factories people and animals are also being “contaminated”.
Castro, who installed his 27 fish at the LA Art Show, representing MOLAA, will soon exhibit his art of recycling in Las Vegas (Nevada) and his native Argentina.