Home People Art and Literature Almafuerte: do not give up, not even beat

A rarity is the poet, teacher and speaker Pedro Bonifacio Palacios, Almafuerte. Forgotten by literary fashions, their verses resonate in the minds of Argentines. Piu Avanti with the first poet of the poor. 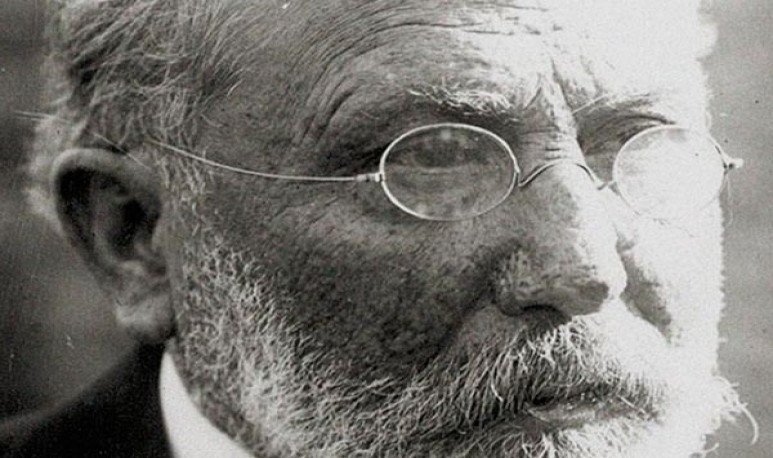 In the early seventies, Jorge Luis Borges, then director of the National Library, consulted what five names cannot be missing in a history of Argentine literature. The writer responds in an office crowded with books to Fernando Sorrentino: “Wow, what a difficult question... First: Sarmiento; then, Ascasubi; then,   Hernández;  then, Lugones, and then... we're already pretty close to our time, and I'm going to look bad with some contemporary... but, let's say... iacute; to be Almafuerte ”, listed our greatest writer, who published contemporary “The Brodie Report” and “The Book of Sand”.  Borges  himself had made a brief biography of Almafuerte in a prologue for Eudeba, the university publishing house, in 1962, another essay in line with that of  Evaristo Carriego,  disciple of the poet “Prophetic Wounds”. There the genius of “Ficciones” points out that the main merit of Palacios' poetry, “rhetorical and effectist, full of biblical engolement”,  is that it possesses a virtue that stands out above the rest of his companions of the Eighty Generation, gentleman of Cané and Mansilla. It is the need from where hammering arises in verse from Almafuerte. It is poverty and marginalization  “ If they prostrate you ten times, you rise another ten, another hundred, another five hundred: your falls must not be so violent, nor shall they by law be so many,” said the unbreakable Almafuerte.

Pedro Bonifacio Palacios was born in La Matanza, the current match of San Justo, on May 13, 1854. Orphaned as a mother and abandoned by his father, at the age of five he was in the care of some relatives as he tells himself in “La hora tragic” He studied in Buenos Aires and, at 16, he is in front of a classroom in the Parish of Piedad in Balvanera. His real passion was drawing, they say he had an extraordinary talent for copying real models,  and he applied for a scholarship to the Buenos Aires legislature in 1875 to study painting in Europe, which was denied, being the first encounter with the powers of turn — remember that it was usual until the end of the twentieth century that the State subsidizes artists for studio trips, although in the first decades it generally fell to members of the elite. From that moment on his life is built in teaching,  in which he was director of a school in Mercedes, and preceptor in Chacabuco, teaching children and adults, sometimes in evening courses. It will be in this town in the northwest of Buenos Aires that  the mythical encounter with his admired Sarmiento takes place. The procerer was impressed in 1884 because Palacios had built with his hands chalkboard, tables and chairs.  There would also happen a constant in his life journey, marked by his innate rebellion to authority and formalities, because he would be fired for the lack of qualifying title.  Almafuerte was a teacher who didn't need titles.

He begins a prolific action in journalistic media, West Mercedes, Buenos Aires and El Pueblo de La Plata, and he founded a newspaper in Chacabuco, El Progreso. Plato, Juvenal, Isaiah and Job were some of the pseudonyms he used to attack the Juarez Celman government, which accelerated the first crisis of the agro-export model, in 1890. Like several of the opponents of roquism that would constitute the Civic Union of Leando N. Alem, Hipólito Yrigoyen and Bartolomé Mitre, Palacios approaches them but with an ideology close to romantic socialism. The failure of the Park Revolution, and subsequent repression, pushes Palacios to be publicly called silent, and dedicated to teaching in a rural school in Salto. He was already famous as a hearty speaker in squares, pulperias and Buenos Aires streets.

From this northern part of the province of Buenos Aires he began to publish literature more regularly under the definitive pseudonym Almafuerte, from a poem appeared in 1892 in the newspaper La Nación . He also leaves behind his first verses, in the candor of late romanticism of “Passion” or “Forget about me” and delves into an epic-social poetry, with the first installment in “Canto al Progreso” (1879) As he radicalizes his poli positions , his work acquires less poetic flight but wins in ideas and apostrophes, “I tell you about nameless sorrows,/deep human miseries,/the slave of the modern age/who never smiles, who never rests”, in “Red Antiphon”, after the defeat of the revolutionaries of the 1990s “& rdquo; Mendicant old age after a life of anvil and forge”, “nights without light, without shelter, without bread, without pillow”, “under the protection of human laws, freedom and will and conscience, is nullified and deformed, squeezed and uprooted”... In Argentine literature, says Marita Minellono in” History of Literature of La Plata” - a single antecedent of poetry of this kind had been recorded... it is a work of the gauchesca, Martín Fierro de José Hernández”, is analyzed by the poet of “La sombra de la Patria”, who comes to rebuke God there for the lack of justice in Argentina. 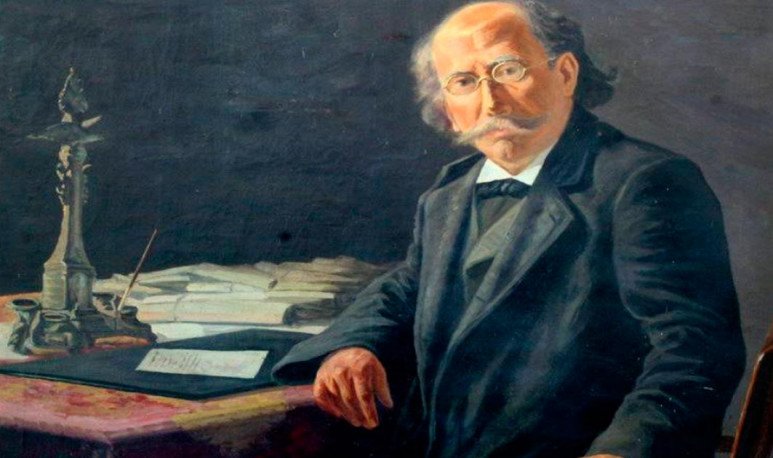 In 1887 the poet decided to settle in La Plata, more later than in 1895 the Directorate General of Schools left him to be a school director in Trenque-Lauquen. Of course, not counting the title. In the City of Diagonals, he would find work as a librarian, and a pro-secretary of the provincial deputies, until the office was abolished in 1898. They offer him to earn his life as a postman but his haughty spirit rejects the position, and he lives in a painful way between the rancheríos of the conurban, and the nearby Platense.  Booklets for the publications La Argentina and South America, and a column in the newspaper La Nación, are his only income, which does not prevent him from welcoming, and educating, street children in their humble abode — the brothers Gismano accompanied him until the end of his days . He publishes in quatratetes the “Evangelicals” and “The Missionary”, an alter ego, that bare human miseries, and his own fall in alcohol,  “I am the one who put peace in discord, /bread in hunger, relief in passions/and in tenacious obsession, more than reasons/put without reasonar, misericordia ” Almafuerte returns to the political arena in the Provincialist Party of Buenos Aires in 1905, but would again be separated by the warlike character of its harangas. In 1913 he began to revalue his work, and organizes a series of lectures at the Odeon Theatre, and different cities of the Interior. A few years later he acceded to a life annuity pension of the Congress of the Nation, at the behest of the Socialists, when his figure as “ old poet” was almost a legend in La Plata, in the humble house of Avenida 66 N°530, which currently houses the poet's museum “Y a despite being balm and being harbor, /being light, being mantle, being food.../Nobody loved me about life/and no one will honor me after death! “, closed as an epitaph the missionary Almafuerte, the Apostle of Poetry, who died on February 28, 1917.  His works in life were gathered in two volumes, “Lamentations” in 1906, containing “The Missionary” and other poems; and “Almafuerte and war (prose and verse)” in 1913. Only in 1930 were the complete works carried out by the provincial government, the last major project that Almafuerte was working on.

“ Almafuerte's poetry has impressed me a lot,” Borges told Sorrentino in “Seven conversations with Jorge Luis Borges”, “I think he wrote -acaso- the best and worst verses of the Spanish language. And I also think that in Almafuerte there is something that is very rare here and — perhaps — in all other countries: the presence of a singular man . It is a pity that the circumstances of his life did not allow him to realize... One of the projects that have always accompanied me... is to extract a philosophy from the confusing set of Almafuerte... a philosophy and above all an ethics”, referred the story of “Universal History of Infamy”, who regretted not having met him personally,  in a line similar to a writer in his antipodes, Ricardo Rojas, “Almafuerte admits better and worse poetry but never equal... more than an orator or a philosopher, there was in him a lyrical deeply human for his pains and dreams... he loved the people as a fruitful force ... a man who relieves his anguish in the verse, and makes the cry a song”, he topped in his founding “History of Argentine Literature” Almafuerte, which continues to inspire the rebels and nonconformists of all the eacute; few, from the  Boedo Group  to the heavy rock band Almafuerte, to those who challenge daily injustices, had a single audience, the people, “ I'm going to sing you to you/& iexcl; oh my darling rabble! /because the vile and fall/fills me with love”

Do not give up, not even defeated,

feel not a slave, nor a slave;

Have the tenacity of the moldy nail that

not the cowardly fearlessness of the turkey

that amainates its plumage at the first noise.

Proceed as God who never cries;

or as Lucifer, who never prays;

or as the oak grove, whose greatness

needs water and does not implore it...

Let him bite and vocifer avenger,

already rolling in the dust, your head!

It says Almafuerte in “No Truce.” “Classic milongas, medicinal sonnets and God save you. Speeches” (1919)

but dreaming the least is affront;

is not worthy of pain to break the brakes

just for the succulent viand;

in front of a fold of full bellies

do the great directives monsters dream

in a bestial worldNo unhappy!

Geniuses of equality, by cowardice,

or protervous high board pirates,

who wanted a world without porphyry,

man as a ruffian, happy and fat

Hate for calm and uniform,

and craving for another level and another;

fever of perfection in the deformed,

and hunger for superlight in perfect;

in the dark soul of the insect

that requires God, for his plans:

“ The legend of Almafuerte has diverted attention, in general fortunately, from his work. His position in the history of literary currents is somewhat eccentric: an exasperate romantic, a modernist with his own theme; Rubén Darío admired him and wrote praisefully about him; also Leopoldo Lugones, who was corresponded to the definition “a Almafuerte For ladies” I had, like Leon Bloy, the gift of insult: just read the hilarious “Apostrophe” against Kaiser William II (“drone and octopus/hyperbolic parasite/dark... /medium histrion/half jackal”)” Caesar Aira in   Dictionary of Latin American Authors . Buenos Aires: Emece-Ada Korn Editora. 2001.