What was once a newspaper and magazine stand became a Cultural Post. The initiative of a renowned entrerriano artist. 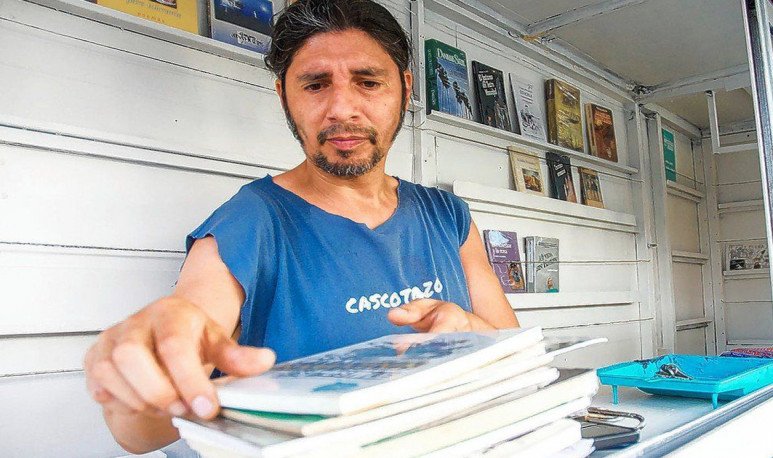 In the city of   Paraná , Entre Rios , artistic manifestations look for their place through different routes. While there were stages when culture was harmed, it always found its way back. Over the years, proposals began to emerge that created spaces to publicize related projects. Painting, music, lyrics,  poetry  and endless expressions are constantly seeking to renew themselves. It is thanks to the will of the workers and passionate in the sector that they do not surrender, fight and defend themselves from invisibilization. It happens that sometimes there is so much talent to show and few eyes to see it. Luckily, the  new Cultural Post  came to  change that scenario  .

The Paranaese  poet  and musician Enrique Zolo decided to face an initiative that will accommodate writers and artisans . Not only in the town, but also in the province. Currently, his energies are set to make him march on wheels. It all started a while ago, when  he saw a newspaper and magazine stand for sale . It is located between 9 de julio and Gualaguaychú streets, an enviable central point. So it was proposed  to raise money and buy it  to develop an idea that was already maturing previously.

Much more than graphic

In dialogue with Uno Entre Ríos, the  entrerriano  reported that it is not a classic newspaper and magazine stand. On the contrary, the project aims to resume a proposal that had occurred to it a few years ago, which consisted of an open pit library in the legendary Sáenz Peña  square  . And while I wanted to go back to that plan, the one now presents new changes. For example, this time the  rental of books and the sale of handicrafts of premises will be addressed. From there it becomes the name Cultural Post, because it points to a  broader activity than reading .

Zolo's  goal  is mainly to  disseminate the work of artists from Paraná and the rest of the provincial territory  . That is why he calls on writers who have published works to take their copies to the post. It can be to rent them or also to sell them. It will also have national and universal literature. However, he noted that books are received from anyone who wants to donate them. The most important thing is that it becomes a library on the street that provides space for entrerrianos artists who need it.

Getting started with culture

The opening of the Cultural Post will be accompanied by a Facebook page where the catalog of readings available will be uploaded. At the same time, you can visualize the different handicrafts, references about authors and creators, among other information of interest to the public. As for sanitary measures, there is no need to worry, as the specimens will be wrapped in film and disinfected. The artist argued that the idea is that people don't manipulate them much so that they don't get contaminated or ruined. Finally, he revealed that books will be sorted by geographical reference, genre and writer. Without leaving aside the shelf reserved for the handcrafted pieces.  There will be a lot of art around here .