We honor the writer in the best way: reading his poems. 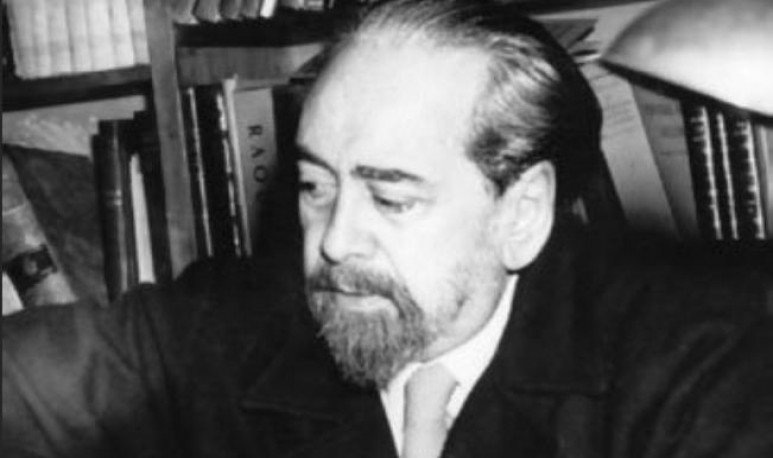 His name was Octavio José Oliverio Girondo, but for everyone it would be nothing more (and nothing less) Oliverio Girondo. He was born in Buenos Aires in August 1891 . The good passing of his family allowed him to get to know Europe at a young age, where he lived and studied a few years in England and France. There he met and strengthened literary and friendly ties with poets and artists who introduced him into the various circles of emerging aesthetic currents such as surrealism. His early knowledge of European avant-garde artistic movements led him to investigate a style that would revolutionize Argentine literature

In 1915 he made a brief foray into the dramaturgy and premiered La stepastra, a drama written in collaboration with Zapata Quesada, his great childhood and youth friend. Together they wrote a second work that never came to be released.

Girondo was received from a lawyer. He never exercised. Between 1920 and 1921 he continued to travel Spain, France, Italy, North Africa and Brazil. The result of these trips was printed in Twenty poems to be read on the tram , his first poems published in 1922 with illustrations by Girondo himself.

The appearance of this book, a year before Fervor de Buenos Aires, Borges's first book of poetry, pointed to them as representatives of the Buenos Aires avant-garde of that time. Both writers — together with Evar Méndez, Samuel Glusberg, Jacobo Fijman, Xul Solar, Leopoldo Marechal, Raúl González Tuñón and Macedonio Fernández — would become involved around the magazines Proa (1922) and Martín Fierro (1924 — 1927) and would be known as members of the “ Florida Group”, characterized by its elite and avant-garde aesthetic, for meeting at Richmond Confectionery, and its antagonism with the “Boedo Group”, with which they had a kind of mythical literary confrontation.

Girondo co-directed Martín Fierro magazine with Evar Méndez and wrote his “Manifesto” published in the fourth issue, May 15, 1924:

“ Faced with the hypopotamic impermeability of the honorable public. In front of the funerary solemnity of the historian and the professor who mummifies how much he plays... Martín Fierro knows that everything is new under the sun, if everything is looked with current pupils and expressed with a contemporary accent.”

Girondo died in Buenos Aires on January 24, 1967, at the age of seventy-five.

It was all love!

It was all love... love!
There was nothing but love.
Everywhere there was love.
You couldn't talk more than love.
Love passed by water, vanilla,
love of the bearer, love in terms.
Analysable love, analyzed.
Ultramarine love.
Equestrian love.
Love made of cardboard stone, love with milk...
full of precautions, preventive;
full of short circuits, cutters.
Love with a big M,
with a capital M,
squirting of meringue,
covered in white flowers... Sperm
love, Esperantist.
Love disinfected, unctuous
love... Love with its accessories, with its spare parts;
with its shortcomings of punctuality, spelling;
with your heart and telephone interruptions.
Love that burns the hearts of orangutans,
firefighters.
Love that exalts the singing of the frogs under the branches,
which tear off the buttons of the booties,
which feeds on encello and salad.
Impostpable love and love imposed.
Incandescent love and unwary love.
Undeformable love. Naked love.
Love-love that is, simply, love.
Love and love... and nothing but love!

The cigar does not

no no no deo without sex or orbit
the inosseous yerto noo in unisolo amodulum
without pores and no no nooacute; dulo
neither I nor pit nor pit
the macro nor dust
the nothing else all
the cigar no
without no


Cry with a live tear.
Mourn digestion.
Mourn the dream.
Crying before the gates and ports.
Cry with kindness and yellow.
Open the canillas,
the crying gates.
Soak our soul,
the shirt.
To flood the paths and walks,
and save us, by swimming, from our crying.
Attend anthropology courses,
crying.
Celebrate family birthdays,
crying.
Crossing Africa,
crying.
Crying like a cacuy,
like a crocodile...
if it's true
that cacuis and crocodiles
never stop crying.
Crying everything,
but crying it well.
Crying him with his nose,
with his knees.
Mourn him through the navel,
through the mouth.
Mourn of love,
of hastío,
of joy.
Cry of frac,
of flatto, of flacura.
Crying
improvising, by heart.
Mourn all the insomnia and all day!

Did I get lost in the fever?
Behind the smiles?
Between the pins?
In doubt?
In the prayer?
In the middle of the rust?
Looking at anguish,
deception,
green?... He was
not
by the weeping,
next to the ruthless, above disgust,
adhered to absence,
mixed with ash,
horror,
delirium.
I wasn't with my shadow, I wasn
't with my gestures,
beyond the rules,
beyond mystery,
in the background of sleep,
echo,
oblivion.
He wasn't there.
I'm sure!
He wasn't there.

Everything,
everything,
in the air,
in water,
in the earth
uprooted and acidic,
decomposed,
lost.
Water made horse before cloud and rain.
Bulls transformed into submissive pulleys.
Deception without mesh,
no “tutu”,
no nipples.
The impudic lie exhibiting his butt
in all postures,
in every corner.
The ravenous moths of cooked file,
disguised as hyena,
tapir with backpack.
Roofings that migrate in dark flocks.
The windows that spit piano dentures,
pans,
mirrors, charred
legs.
For look
without moss,
my heart of tinder,
what we did,
what we have done
with our poor hands,
with our winter and summer skeletons.
Unleash the fire.
Applaud the disaster.
Move,
on rubber, pustule
appetites.
Prostitute the twilks.
Worship the bolts
and the dry brains of softened walnut...
As if there were nothing but sweat and disgust;
as if we only desire to nourish with our blood
the roots of hatred;
as if it were no longer quite depressing
to know that we are only a pale excrement
of love,
death.

a voracious contractile prehensile corolla ajar
and its aphrodisiac dew
and its carnalesence
natal
lethal
alveolo beodo de violo
is the thirst for her and her slow sloping slopes that
crash and disgregate
even if God is her belly
but it is also the chrysalis of an unalalated larva from nowhere
a medulla dragonfly
a lubric naked caterpillar only nourished by rubbing
a succubus chupo mollusk
that drop by drop exhausts mouth to mouth
the much joy
the very total
suffocation the whole shock! after shock!
the complete collapse
is a beautiful syncope with
a cross pit! from panther love to the tropic plexus
a knock out! technical blissful
if not a terrestrial compound of libido eden hell
the binder sediment of a lip precipitate
the obsessive residue of an insoluble solution
a radioanymic mechanism
a therno biped bullente
a robot! electroerotic female with its transmitter of delirium
and lyric-dramatic spasms
although perhaps it is a mirage
a paradigm
an eromite
an appearance of absence
a nonexistent entelechia
the Naiad braids of Ophelia
or just an ultra-portable piece of reality undoubtedly
a despotic matter
paradise made meat
a partridge to cream.