Several generations of Argentines grew up with Mafalda, a character that — more than 50 years after his appearance — remains in force. 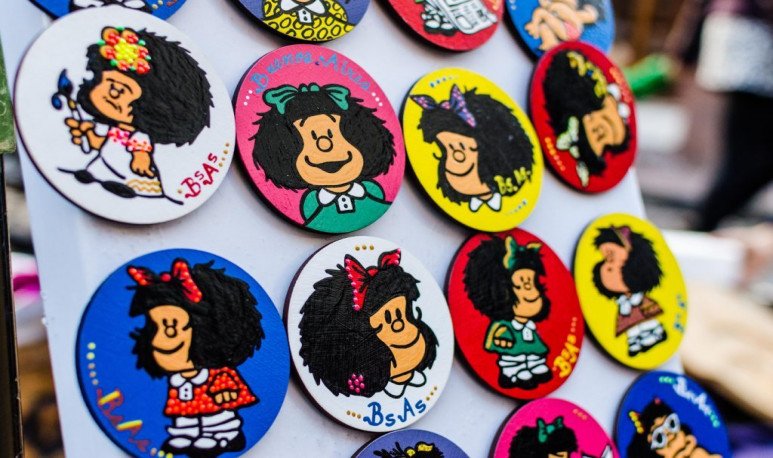 Several generations of Argentines grew up with Mafalda, a  character  that — more than 50 years after his appearance — remains in force. Its creator, Joaquín Salvador Lavado, better known as Quino, has left us recently (in 2020); however, his legacy continues, and his comic strip is still read and read by Argentines and citizens around the world. Mafalda represented the Argentine middle class, and above all, the progressive youth of the time. Even today he still exhibits accurate social criticism, with a sharp but friendly, funny, and even tender vision. I'm sure you know her and her friends Felipe, Manolito, Susanita, Libertad and Miguelito. First, his parents appeared (the father's name was never known, and if we pay close attention, in a single strip it is revealed that the mother is called Raquel). Then, were included little by little his friends, finally his brother Guille and his turtle called Bureaucracy (because it is very slow).

We all know his tastes, such as his fanaticism for the band  The   Beatles  . What's more, one of the books that compiles the strips begins with a quote from bassist Paul McCartney, who alludes to the conspiracy theory that he died before recording the album Abbey Road: “I swear I didn't die. “We know Mafalda's love for spring, her attention to news and the world situation, her feminism, her tendency to the left and most of all her iconic hatred for soup. We know everything about your thoughts. He did not tire of advocating for world peace, denouncing the injustices still lurking the world, and denouncing the incompetence of those who claim to be able to resolve those situations.

Today we want to tell you 4 things you probably didn't know about the most beloved Argentine girl of all time.

Originally,  Quino  had been summoned to design a family of characters to promote Siam Di Tella's Mansfield appliances. That is why many of the names of the characters start with “M”. However, the advertising campaign never saw the light. As soon as it was discovered, it was rejected by the newspaper that was going to publish them. A few months later, when the author was asked to publish a strip in the weekly Primera Plana, Mafalda finally went out into the world (free of all advertising intent), and his story began, on September 29, 1964.

The building that housed Department E, where Mafalda lived with his family, has an exact address: Chile 371, in the neighborhood of  San Telmo , Buenos Aires. “Mafalda lived here,” says a tribute plaque in the building. At the corner of the block (in Defensa al 700), today we can find a statue of Mafalda sitting on a bench. Around it, there are statues of Susanite and Manolith.

Felipe, Mafalda's great friend, is inspired by a real person: journalist Jorge Timossi, a great friend of Quino. His rabbit teeth, elongated face and disheveled hair are the same features that define the  journalist . We might also wonder if the writer would have the dramatic, dreamy and somewhat irresponsible tendencies of his character.

4) Mafalda is also in Paris.

Mafalda is everywhere. We can also run into it on line 1 of the Paris metro, which runs between  arrondissements  or arrondissements 16 and 17, at Argentine station. There, the girl observes attentive from a mural to figures from  science , politics or the arts of Argentina, such as  Jorge Luis Borges .