A marriage of casildendes shows us what it is like to leave the interior of Santa Fe to live on adventure through the great ocean country. 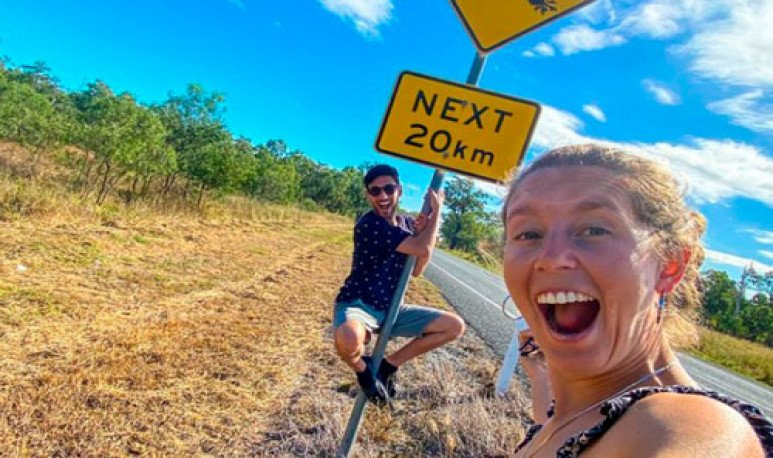 Casilda is a town of  around  thirty thousand inhabitants that is about 50 kilometers from Rosario. Bárbara and Gastón  are a married couple  from there who, one day,  decided what so many Argentines: put together their purse and take the stick  . But in their case, the decision to leave was not so easy, because they left a lot in Casilda. Beyond the logical separation of the affections, the employment situation of both was good. But then why did they leave? Learn in this note the particular traveling history of these casildenses.

He's a hammer and a public accountant. She's a pharmaceutical company. In 2018  they got tired of seeing the world from their homes, and decided to venture into the unknown .The key was that they didn't want to have 15 days of vacation and live to work. So, first, they sent a big trip to Europe on family holidays. And that's where they got stung by that famous traveling bug. They decided not to return to Casilda. That  was the beginning of the change of life, which has already taken almost two and a half years.

The crossing began in the Old Continent:  Spain , Italy, Germany, Belgium, with a very popular modality in Europe. They did the famous Housesitting , work in exchange for accommodation.  Today there are many pages that you subscribe to and apply to take care of someone's house without having to pay for the stay. This allows you to spend more time in each destination and  live according to the customs of the place.

Barbara was betting on having Italian citizenship so she could get a job that pays the bills and allows them to travel when they decided . They came out with some savings  from Argentina, plus the sale of their car and wedding gifts: in total, about 140,000 pesos, but  that would soon be over.

A destination not so planned

After almost six months of a bustling tour of Europe, Barby finally gained citizenship. With the necessary documentation,  they chose to go try their luck  in Australia. Australia  was not in the initial plans,  but many friends and people who came to know had told them wonders about the giant of  Oceania .

That's how they landed in Sydney in August 2019. Prior to his arrival, he already had a job offer in a famous artisan ice cream chain. There he learned from the preparation of ice cream, to the stock check, passing through delivery in a van. The demand was great, but in turn he was paid very well. She, in turn, chose to resume her profession. Without his validated pharmaceutical degree, he managed to settle in a pharmacy as an assistant.  It was quite a challenge, because of the language  and the names of the remedies.  Being a professional job, Barbara earned less than Gaston.

They settled down, rented an apartment a few blocks from the beach, and started living life in Australian style. They fell in love with a city where it is expensive to maintain, but the quality of life is high.  Close to the sea, top level public transport and the tranquility  of, for example, walking back at night or leaving the door without keys.

With $20,000 saved from the working months, they resigned and continued their dream of traveling.  They bought an empty minivan and recycled it with objects that people leave  on their doorstep.

For now, the couple of Santaffesinos have no plans to return home. They miss the affections, but, today, they are happy  to explore  the world.

Adventures of a Colombian chef, with a restaurant in Australia, passing through Buenos Aires

And, you, how were you doing in these games?

My neighbor the murderer

A wagon that misses