Home People Argentines around the world The trip of Pampa 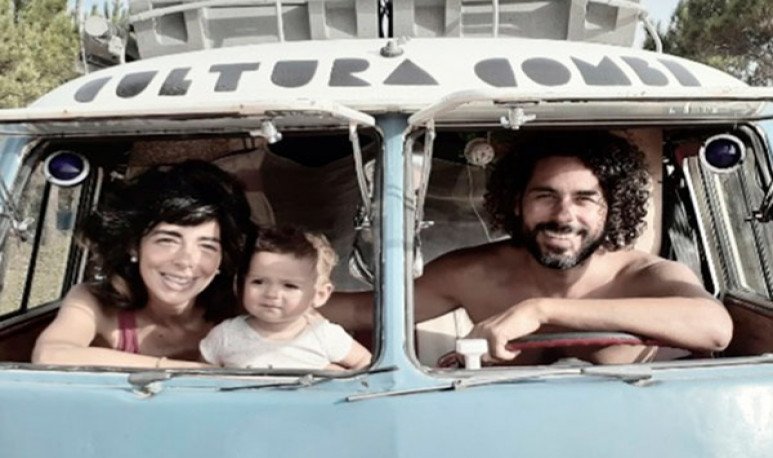 Look at life from a different perspective. Understand that there are many ways, many ways to live.  Today I'm going to tell you the story of Bethlehem and Roberto.  Surely, many of you will think you're crazy. Because they decided to go on the route, without time, without a fixed course, to enjoy the road and not the destination. And they did it with Pampa, their little daughter.  And in a model 59 combi . Yeah, all that.

To those who think it's crazy, that it's something reserved for  different  people — like them — I tell you that it's crazier to get up every day, for years, to go the same way, home to work, work to home, perhaps never discovering what moves us in life.  So who's crazier?

The Meeting of Two Ways

Any morning, we woke up without even suspecting that that day we will meet our companion on the road. Because  no one will tell you when you're going to fall in love . It just happens: two paths suddenly cross, coincide, and magic happens, in the least expected place.

The roads of  Maria Belén Costa and Roberto Torres  were crossed in 2014 in a  combis meeting  in Roca Park. In addition to the love they shared for this type of vehicle, they also discovered that they were neighbors. Both lived in the town of  Haedo , in the west of the Buenos Aires district. But the most beautiful coincidence was another: they  both dreamed of going out  around the world  . Combi, of course.

Belén was an initial teacher and a school librarian; Roberto was a cultural manager in a space called “Combi Culture”. She already had her own combi. He was waiting for him in the house of a neighbor, who had abandoned her without knowing what it was. It turned out to be a  German T1 combi from 1959,  a very unseen model in Argentina. Together they put down to work and, with a lot of work and effort,  turned that vehicle into a trailer.

But first, you had to try it. To do this,  they made some short  trips    within the province of Buenos Aires and then to the south of the country. These first practices allowed them to realize what they were going to need. Today, the combi has a refrigerator, a kitchen, an oven, a sofa bed, a closet, a 50-litre water tank and solar panels to generate energy.

Belén and Roberto never believed that a son could be an impediment to fulfilling their dreams. Quite the opposite. As they waited for the arrival of their first daughter, they began to plan their long-awaited  trip  through Latin America. Bringing together the professions and passions of both, they thought they could take the opportunity to bring something nice to the towns and cities they visited. Thus, they decided  to screen films related to the care of the environment  and generate debate spaces in schools, bars and squares.

Finally,  in April 2019 Pampa was born . In November, all three went out on the route. The intention was to reach Mexico, but the pandemic changed their plans.  They toured the entire Uruguayan coast , until rumors about the virus made them stop. The closure of borders was imminent and they preferred to return home. Since the times in the combi are longer, they decided to leave it in Chuy, the border city between Uruguay and Brazil, with a family that takes care of it as if it were theirs. They never thought the break from their trip would be so long, but they look forward to seeing all this happen so they can return to the routes.

With the material they obtained during the trip through Uruguay,  the couple released a documentary that can be seen on YouTube:    El viaje de Pampa . It is the story of her story, told in the first person by Pampa, with the voice-over of a 5-year-old girl. Belén, Roberto and Pampa teach us something:  you can live  differently  . Just take the leap and encourage yourself to experience life in another way.

You still think it's crazy?

Day 7: The band will honor Soda Stereo with a luxury show

And you, are sweet potato?