Home People Argentines around the world The Santafesina who fell in love with a Welsh, part 1

The love story between Elena and Lee is crossed by years of waiting and forced separation. What is it like for an argentina to live in Wales? 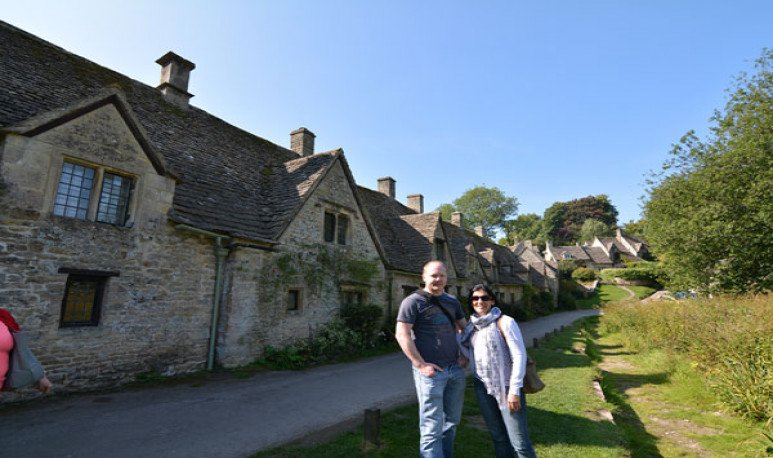 Elena Gandolla has one of those life stories that are not read every day. Today that life is found as a  couple  in Wales, with a Briton who knew how to wait for her out of love. This Santafesina shares  her particular experience in two deliveries.

After teaching English for six years, Santafesina Elena Gandolla decided to try her luck a year abroad. There was 2005 and the young woman  had no more ambitions than to work as a girl or Spanish assistant in some school . “I felt a little suffocated in Santa Fe and needed to explore the world. I wanted to have an adventure outside my comfort zone,” he says. Although she had no big dreams, there was one condition:  it should be an English-speaking country, because when studying teachers, an intense passion for Anglo-Saxon culture was born  there. “In fact, here in Wales I usually tell me that I know more about British history than the British!”.

After much searching, he got an exchange of education professionals in Britain.  “ They were going to pay me very little, but I was going to have home and food , that was enough for me.”

We were not looking for each other...

During the six months of waiting, Elena decided to prepare for no  unpleasant surprises  and to be as soaked as possible about British life. So, apart from reading articles of all kinds,  you threw yourself trying your luck on one of the many chatrooms on the internet , very popular by those times. He entered one called United Kingdom, randomly. And he met a few people who gave him information about everyday life and what to do and what to avoid. “ One of those people was called Lee, my current partner . He was Welsh and was very concerned about my idea of traveling alone for three months to the unknown. What's more, it seemed like a little dangerous decision to him.  And how are you going to do? What if something happens to you? What if you don't adapt? . A bad vibe! But, after telling her my plans in more detail, she understood that it was not an adventure in the strictest sense of the word, but an organized adventure.  Sometimes we joked about getting to know each other  when he's around.”

They chatted for hours, days and months. When it came time to leave (to a village in Oxford County), Elena already felt that they knew each other a lot. “Still, I  hesitated when he offered to pick me up at the airport  and take me to the pupil school where he would work for three months. After consulting with my group of friends-sisters (as always), they all agreed that we could  trust  this virtual character. And  I accepted his proposal .”

The three months turned into six. Lee visited her every weekend.  “ When I realized, we were as a boyfriend , which was a problem because the school announced that it was closing (maladministration exists in every country!). In July, he should return to Argentina. I tried to find a job, without much luck, and for a return of destination I received an offer from a university in Minnesota (USA). I had applied for a position for four years, without being given more than the opportunity for a phone interview and a  thank you for participating .”

Santafesina could not be denied . I had always wanted to experience America. USA , so with a broken heart he announced my decision to Lee: he would go for two years to St. Paul, Minnesota. “To my surprise, he took it very calmly and assumed that the relationship would continue in the distance, as possible.  I doubted it would work .”

At the end of her two years in Minnesota, Elena was given the opportunity to do a Master's degree, a scholarship in West Virginia, USA, for two more years. Again it was  decided that the relationship would continue to the distance , as possible. He went to America. US a couple of times, and Argentina too. She was spending Christmas in Wales. Skype was essential in those times.

Already with the Master under her arm, and refusing to consider the possibility of doing a doctorate (5 years more studying),  the young woman decided that she already had enough experience to try her luck in Britain.

You'll have to wait for a second installment to learn how this story of international  adventure  and love follows.